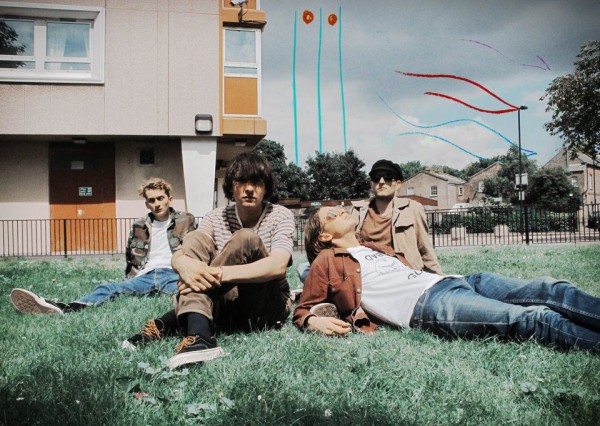 Everyone’s favourite Australian/New Zealander/English band, Splashh are visiting Birmingham’s wonderful Hare & Hounds venue tonight in support of their superb new album Waiting A Lifetime (see last week’s review,) which is hopefully to be heard emanating from the speakers (or headphones) of the nation at this very moment.

Before they take the stage, though, Phones are this evening’s first offering. Beset by technical problems seemingly caused by a wonky laptop, the band nonetheless gamely make their way through a charming set containing moments of real promise – their considered electronica sitting somewhere between Pure Bathing Culture, Stereolab and Melody’s Echo Chamber. They throw in a couple of covers, (Tame Impala‘s ‘The Less I Know The Better’ and Kylie Minogue‘s ‘Can’t Get You Out Of My Head’), but in truth they don’t need to; they already have enough quality in their own songs.

Local heroes The Americas are next up, fresh from selling out The Sunflower Lounge down the road a few weeks back. The band’s sound is more straight-ahead Rolling Stones-y rock and they go down well with the audience, many of whom have come specifically to catch them.

The last time Splashh played in this room, (four years ago), they were riding a wave which saw them warmly received on a tour with Spector and getting a fair bit of airplay for songs like ‘All I Wanna Do’, from their impeccable debut album Comfort. The show ended with a good-natured stage invasion. Tonight, the crowd is a little more reserved at first, but a lean and powerful set blows away the cobwebs as the band throw in new single ‘See Through’ and the aforementioned ‘All I Wanna Do’ surprisingly early (second and third songs respectively). Founder members Sasha Carlson and Taddeo ‘Toto’ Vivian MacDonald have great on-stage chemistry and look to be in their element as they work their way through a set that is drawn mainly from the new record. ‘Rings’, with its pneumatic drums, is glorious and even more impressive on later learning that tonight’s drummer is a very recent addition to the band.

A real surprise is that the band play an excellent version of presumably the hardest Waiting A Lifetime song to replicate, the synth odyssey of ‘Look Down To Turn Away’, which paves the way for them to then play a spirited version of the album’s former single and title track. Early single ‘Need It’ is given its usual extended wig-out which draws the most energetic reaction from the audience. It turns out to be the final song in a short but perfectly formed set.

If you get the chance to see this special group, grab it with both hands. Don’t be waiting a lifetime, now!