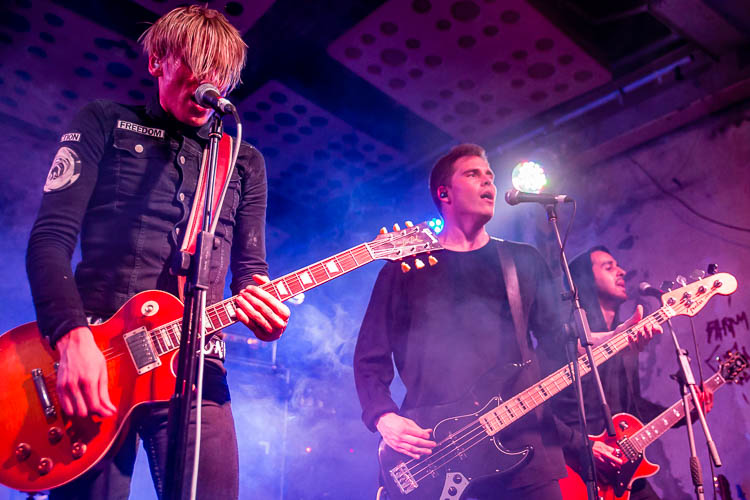 Stereo – as in the building itself – is impressive, even when obscured by scaffolding, as it has been for at least the past year or so.  Designed by Glasgow’s very own Charles Rennie Mackintosh, the building is now home to one of the city’s most sought-after vegan restaurants – and the menu comes very highly recommended.  Downstairs, however, is a whole other story.  There are worse places, sure, but Stereo is a particular brand of special: poor lighting, a mysterious sticky floor, rusted pillars, and walls in need of several coats of paint.  All that being said, the whole is far greater than the sum of its parts.

First on the currently cramped stage are Southampton band Faux.  Considering the audience is predominantly females under the age of 20, they look calm, composed and put on a great if brief performance, and warm the crowd up brilliantly.  They’re full of energy, but, as usual, there seems to be too much in the way of guitars and not enough sound in the microphones, the vocals – lead and backing – are only really heard if they shout.  They have microphones, there shouldn’t be any need to shout into them to be heard.  Musically, they’re spot on.  They actually play well together as opposed to at or against each other as so many bands seem to have a habit of doing.  The vocals are a fraction out of tune but in a weird way it kind of works for them.

Tigress‘s drummer enters under a cloud of smoke from the dreaded smoke machine; admit it, nobody likes it, photographers loathe it, and in a little space like Stereo it ends up swamping the place and only adds to the grimy look of it all.  For a while, there’s just the drummer, alone, swallowed up in smoke and tones and fractions of sound before he’s joined by the rest of the band.  Tigress look the part, but something’s just not right here.  There’s far too much posturing and posing, and the guitarist and bassist have a habit of standing on their gear.  It looks cool, and it fires up the crowd but again, something is off and for now, I can’t put my finger on what it is.  The band have an abundance of energy, and that alone goes some way to entertain the audience.  The vocalist is vaguely in the vein of Paramore‘s Hayley Williams, only she doesn’t quite know how to sing properly; it’s all coming from her throat and mouth – not one bit of it is from her stomach (where it should be), and after a couple of tracks it’s as annoying as it is worrying.  For some reason, it’s trendy to sing like this and for the life of me, I have no idea why.  If she carries on like this she risks vocal nodules which could eventually mean bye-bye singing career.  Secondly, if you have to direct the crowd with theatrical side notes, you’re probably not doing it right; let your music do the work for you instead.  The performance isn’t bad, but it also isn’t real.  That being said, there is great potential here, it just needs a little attention and a lot of hard work.

By the time Counterfeit show up (on a much less cramped stage) the crowd is wild, but they’re still armed with mobile phones.  Perhaps this is me being old and grumpy, but aren’t live performances meant to be enjoyed in the now rather than hours later through a tiny screen with terrible sound?  In what is now typical Counterfeit fashion, there’s no easing anyone into anything, no lulling anyone into a false sense of security, just straight in with the loud, confident, frenzied ‘Washed Out’ – the opening track to their recently released debut album.  Having seen them almost a year ago to the day – from the back of King Tut’s – it’s very different from up front!  It’s dangerous, and going by the look on lead singer/guitarist Jamie Bower’s face at the sea of phone cameras, a little scary – so much so that I may have taken an involuntary step backwards.

The energy is relentless, and it goes both ways this time; last year the crowd took a while to warm up.  Three tracks in, ‘Addiction’ sees guitarist Sam Bower spinning in tight circles and Jamie standing on the barrier while myself and photographer Clare scream at him to get down and behave or we’ll send him to the naughty corner.  Apparently, our mothering instincts intensify the older we get…  The one good thing about it is that while standing on the barrier, Jamie has a captive audience literally at his feet as he insists – and not for the only time tonight – on folk putting their phones away; “This is between us,” he declares, and rightly so.

‘Letters To The Lost’ – a heartbreaking song about a friend who had taken his own life – prompts a call for people to seek help if they find themselves struggling with mental ill-health.  No matter where he is in the room, whether on stage, balancing on the barrier, or in the middle of the room, Jamie has the audience eating from his palm.  Yes, it’s fun, but it’s also serious.  We should be talking about mental ill health, and doing so seriously and honestly; none of the ‘think positive’ crap for these guys.  Depression and anxiety is real and negative, destructive and angry, and ‘Letters To The Lost’ conveys it as such.  Tears were shed (though admittedly, they were ours), and even if only for a brief moment, the audience were still and reverent.  As played out last year, ‘Family Suicide’ is jarring and pulls everything up sharp, and once again whips the crowd into a frenzy that lasts for the rest of their set.  There’s an awesome drum solo in ‘Lost Everything’, but drummer Jimmy Craig is entirely hidden by smoke from that blasted machine.

As expected, the biggest heart-in-mouth/sh**-someone’s-going-to-get-hurt/Jamie-get-the-f***-down moments occurr at the very end – specifically during ‘Hold Fire’ and their battle cry for that much needed solidarity, ‘Enough’, which sees Jamie climbing and clinging to the aforementioned rusty pillar, and later dangling from the ceiling.  Fortunately nobody was actually hurt and it’s all good fun, right?  And that, I think, is what makes Counterfeit such a delight to watch – it’s fun.  Sure, it’s a little dangerous, but everything is all right in the end and everyone has the best time ever.  If nothing else, tonight is a testimony as to why Counterfeit are so vital for the times we live in right now.