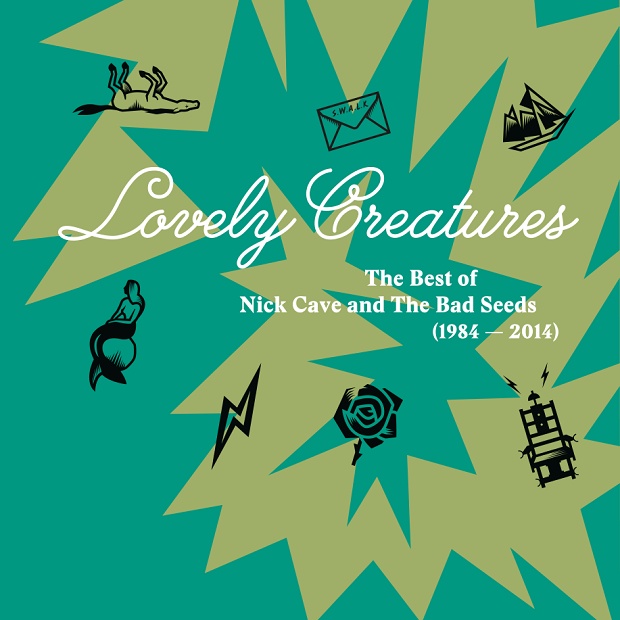 Where do you start? No, seriously…where do you start? For me, the beginning is still a vivid memory etched in a vast luminous Eighties font and buried so deep within my subconscious that I only take it out on special occasions. It was 1984, I was an annoyingly shy and irritating 17 year old who hugged his radio to sleep every evening to the sound of John Peel and on one such evening during a family sojourn to Camber Sands, the legendary DJ played a cover of ‘In The Ghetto‘ by some Aussie chap I’d never heard of before. Several nights and numerous listens later, I couldn’t wait to get back home and send a postal order and stamped addressed envelope to a warehouse in deepest Guildford and wait four weeks for my precious cargo to arrive. I relate this anecdote simply because it perfectly demonstrates the longevity of Nick Cave; he’s been around for longer than the internet.

Lovely Creatures is hardly a Greatest Hits release simply because that’s not what Cave has been interested in. In his own words “This release is designed to be a way into three decades of music making. That’s a lot of songs” which is an understatement in itself. Depending on the depth of your pockets there is a double CD, a deluxe 3 CD and DVD set and the Limited Edition Super Deluxe Edition with Hardcover Book, none of which require you to wait on the vagaries of the postal service in Guildford. Whichever option you choose, there’s not a chance you’ll feel short-changed as Cave has lovingly curated some of his finest moments for those not old enough to remember the days when ‘Lol’ simply referred to a bloke in The Cure.

From the title track of From Her To Eternity (1984) through to a triumvirate taken from the criminally under-appreciated 2013 Push The Sky Away (‘Higgs Boson Blues’/’Jubilee Street’/’We No Who U R’) Cave returns time and again to the classic themes of love, loss, death and religion. I’ll be honest, the articulate prose which underpins the majority of his output is a rare talent I wish I could call upon right now in order to do his work justice. But Cave is a genius, I’m not. If you are a long-standing admirer of Nick Cave and his band of troubadours then you’ll probably not get too excited, you already know the score. But if you’re young or been living in solitary confinement for 30-odd years then I envy you having the opportunity to listen to these tracks for the first time.

Even the 2 CD set is packed with goodies; ‘Into My Arms’ should be the first dance at every wedding, ‘Red Right Hand’ ought to be the soundtrack to Halloween, ‘Stagger Lee’ is a hypnotic turrets-fuelled descent into hell and as for ‘The Mercy Seat’ well…has there ever been a more nightmarish seven minute opening to an album? Answer: no, there hasn’t.

You may be mistaken if you belive this review is being written by a fully paid up member of the Nick Cave fan club. Actually, you’d be way off beam, I’ve never bought a single release since sending off that postal order in the Summer of ’84. He has always been someone I have admired enormously rather than follow as a devotee but one momentary glance at the track listing on Lovely Creatures has me pining for my past, my hair and a slimmer waistline. I am rarely a fan of nostalgic releases such as this but then not everyone has grown old with Nick Cave and The Bad Seeds; if you need a jumping-in point within which to immerse yourself then Lovely Creatures is the perfect introduction but hardly the last word.

As Nick himself comments on the tracks which fell by the wayside “…and there are those that didn’t make it, poor things. They are the ones you must discover by yourselves.” Enjoy the journey, you lucky people.

Lovely Creatures: The Best Of Nick Cave And The Bad Seeds is released on May 5th on Mute