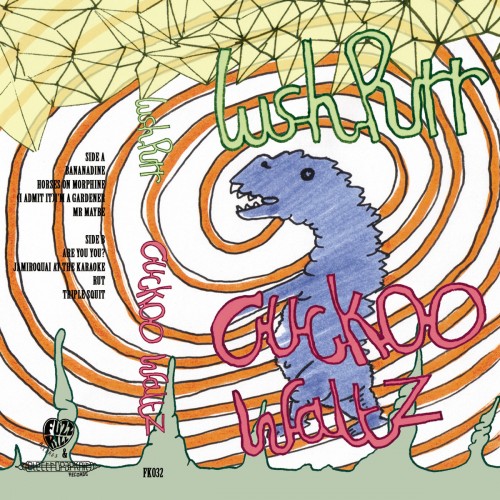 Fresh from having the honour of scoring God Is In The TV’s Video Of The Week three weeks back, Glasgow’s Lush Purr are now delivering their album Cuckoo Waltz to an unsuspecting public.

The track that got the aforementioned VOTW plaudits was ‘(I Admit It) I’m A Gardener’, a superbly eccentric track about, well, the wonders of gardening – being proud to indulge in the activity that some may find ‘a bit lame’. The track pays no heed to traditional song structure; although it is actually a very catchy two-and-a-half-minute number, its vocals (which sound like a distant The Shend from 1980s wonky pop magicians The Very Things) arrive after 34 seconds and are done by 57, leaving a long outro on an already quite short song. To trail the album with this gives an idea of the band’s manifesto, which is presumably to do whatever the hell they like.

Opener ‘Wave’ is a subtle nudge into Cuckoo Waltz‘s world, it sounds like it was recorded on an old tape recorder, and possibly was. It is followed by ‘Bananadine’, a C86ish track that quite nicely fits the band’s description of their work as ‘jangle dirge’, a wonderful name for a genre if ever there was one.

‘Horses On Morphine’ is another song title that you probably wouldn’t find on an Ed Sheeranalbum; it powers along a little like early, lo-fi Boo Radleys, which is certainly no bad thing.

A couple of the tracks here were originally featured on ‘various artists’ compilation albums: ‘Are You You’, possibly the most accessible pop moment on the record, was featured on Fuzzkill Records’ Now That’s What I Call Music 666 Vol 2 (a cassette only release that actually also features their pre-Lush Purr outfit The Yawns). Meanwhile, ‘Rut’ could previously be found on the 2015 Song, By Toad compilation David Cameron’s Eton Mess.

‘Jamiroquai At The Karaoke’ is not just one of the year’s (century’s?) best song titles, but also a sweet duet between Gavin Will and Emma Smith, whose twin vocals work so nicely many times across the record.

Cuckoo Waltz is a quite addictive listen – defiantly lo-fi, darkly humorous but never self-consciously quirky for the sake of it. The songs really stick after two or three listens – the ‘…Gardener’ song is really not that representative of the album at all – maybe investigate the bittersweet ‘Mr Maybe’ or (another good title) ‘I Bore’ to get a handle on the record’s direction.

The world is definitely a better place with Lush Purr in it.