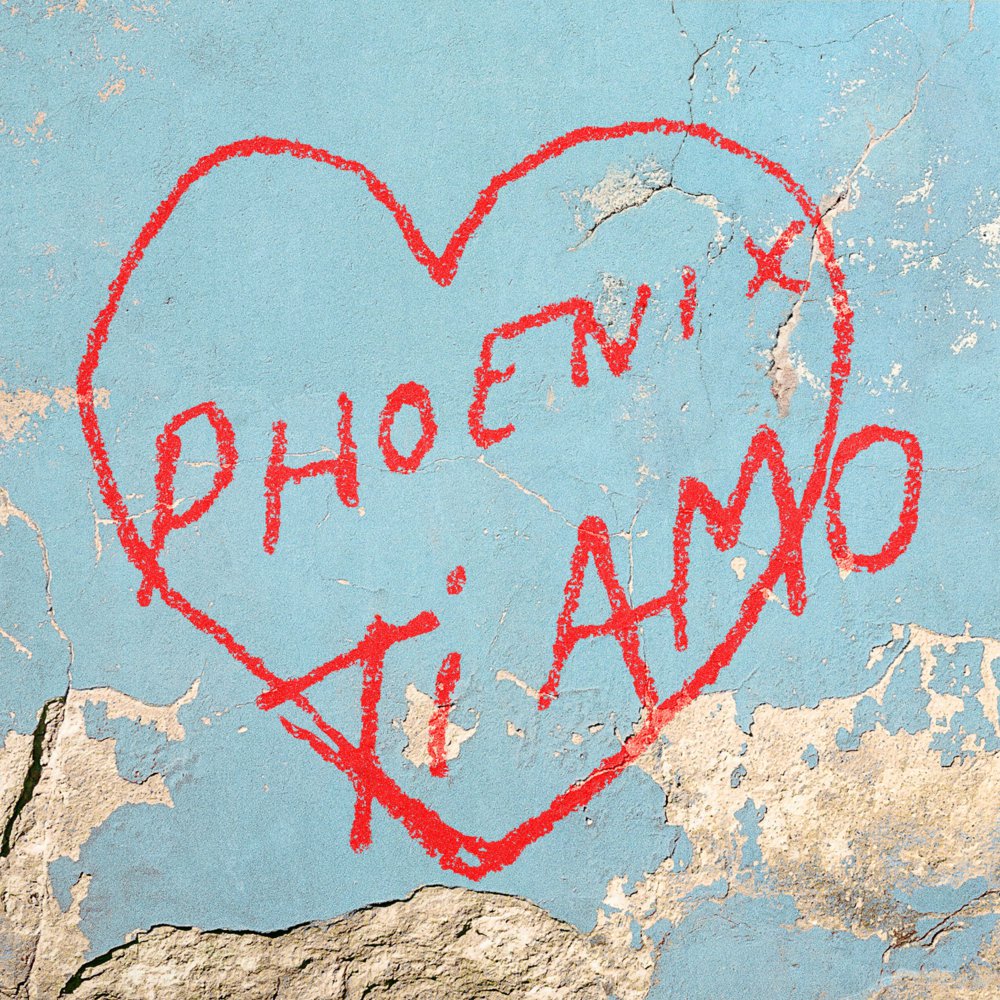 Phoenix appear to have missed their moment to become the huge band they deserve to be. After 2009’s breakout album, Wolfgang Amadeus Phoenix, they took four years to release Bankrupt. It was an album that was often (and unfairly) called overproduced and came with accusations of the band playing it safe. After another long four year gap, Phoenix return with their sixth album, Ti Amo. It sounds like the band are admitting defeat and settling on the cult status they maintained for almost a decade before Wolfgang Amadeus Phoenix. Thomas Mars sings, “I’ll always be an outsider” on ‘Fleur De Lys’. That line sums up their position perfectly.

Luckily, this acceptance suits them well. Bankrupt was a good record but there was a sense that the band were often trying too hard to recreate the natural anthemic highs of “1901” and “Lisztomania”. The songwriting and production throughout Ti Amo is more nuanced and has more of the effortlessness that has always made their career engaging.

Ti Amo begins with the slinky first single, “J-Boy” — it can be added to the impeccable Phoenix singles collection that will hopefully appear one day. It has the same groove and sparkling synths that made Bankrupt’s ‘Trying To Be Cool’ the undoubted highlight. Sonically, there’s a splash of Yellow Magic Orchestra in the shiny production. The title track follows and has an 80s computer game-inspired intro before it bursts into a cool new-wave-meets-disco hybrid. Their underrated sense of humour shows as Mars sings, “I’ll be standing by the jukebox champagne or prosecco? Playing classics by the Buzzcocks Battiato and Lucio”. His delivery of, “open up your legs” recalls fellow French genius, Sebastien Tellier. Ti Amo is their most playful record since United.

‘Fior De Latte’ is so lush and breezy that it wouldn’t sound of place on 2004’s Alphabetical. ‘Goodbye Soleil’ has sprinkles of keyboards that can be traced back to the best 80s Italo disco. It wouldn’t be a Phoenix album without a hook made from Mars’ trademark one word repetition. That comes in the catchy chorus of ‘Role Model’. The chilled balearic-like melodies of ‘Via Veneto’ sound like the kind of song Empire Of The Sun have been trying to write their whole career. The immaculate production transports you to the band’s romantic vision of Italy, which is one of the album’s central themes.

Ti Amo’s only flaw is the slightly underwhelming final song, ‘Telefono’. It sounds under developed and doesn’t compare to the list of previous classic Phoenix closers, ‘Second To None’, ‘Armistice’ or ‘Oblique City’. Those songs felt like victory laps on albums where the band knew exactly how to leave the listener wanting more. Here the band create a less successful version of something from The Strokes’ underrated album, Comedown Machine. It slightly loses their momentum, but it’s a small issue to the rest of the album.

On the surface, this is just another Phoenix record — it’s ten short songs in under 40 minutes, which is something they’ve done six times now. It’s a testament to their winning formula that these simple songs and arrangements still sound so refreshing. It’s not likely to win back any fans they lost with Bankrupt, but it’s another engaging record full of escapism and optimism. It’s just what we need from them.