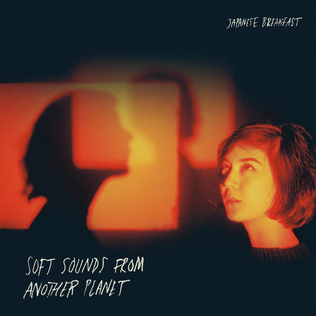 Michelle Zauner released her first album, Psychopomp, as Japanese Breakfast just over a year ago. It was a 26 minute rush of scuzzy shoegaze guitars mixed with dreamy electronic ambience. The sweet melodies and catchy hooks were a contrast to the melancholic lyrics about the tragic loss of her mother to cancer. The songs were bursting with ideas and hinted at something very special, despite the rough production. That potential has come to fruition on Soft Sounds From Another Planet.

Both of her records are deeply intimate and autobiographical, but in different ways. If Psychopomp was Zauner dealing with the immediate reaction to her mum’s illness, then Soft Sounds is her using memories and self-reflection to accept how her life has changed. She’s said this is a record that deals with the healing process; this is evident from the warmth that radiates from every song.

It’s apparent from ‘Diving Woman’ that the lo-fi edges of Psychopomp have been rounded. Zauner sings of wanting to have it all over pulsating synths and a bassline that drives the song. It conjures up the same spacey atmospherics that made Rose Elinor Dougall’s recent album, Stellular, so engaging. There’s so much attention to detail in the production and the  storytelling.

The clear production continues on the wonderful first single, ‘Machinist’. It’s one of the few songs that survived Zauner’s aborted idea of making a concept album about science fiction. She sings of falling in love with a robot: “all the times I felt so plugged in, you were tuning out, a muted channel, a cold ship, a hologram, an abyss”. It’s a testament to her skills that she can write about common themes, such as love and failed relationships, in such a unique and affecting way.

There are similarities to Angel Olsen’s last album on the powerful middle section of songs. Zauner uses a yearning arrangement on the title track to deepen the impact as she states, “there’s no part of me left that can feel or hear”. ‘Boyish’ is filled with gut-wrenching lyrics such as, “if you don’t like how I look then leave”. It hits hard thanks to her vulnerable delivery. The chorus swells with strings and harmonies, and it has a sweeping romanticism similar to the best songs by Camera Obscura. When Zauner sings, “I can’t get you off my mind, I can’t get you off in general” she cleverly combines heartbreak with sexual experiences, something she did on Psychopomp.

All of the obvious pop sensibilities that Zauner showed on Psychopomp are more focused here. Her arrangements are more expansive and her vocal performances are more prominent. You can hear it on the early 90s alternative influenced,‘12 Steps’. Zauner reminisces about an earlier relationship, “looking back, how did I keep moving?” It’s a line filled with sadness that could also be applied to dealing with her mum’s death.

The biggest emotional punch comes from the moving, ‘Till Death’ which opens with the poignant line, “all of our celebrities keep dying”. A gorgeous and comforting horn section appears after the first chorus. Zauner turns the song back on herself over a spine-tingling key change when she pleads, “teach me to breathe, teach me to move”. It’s the sound of someone knowing they have to move forward, no matter the setbacks and the pain.

The brilliance Zauner hinted at on Psychopomp has been fully realized on Soft Sounds. This revealing and heartwarming record finds Zauner mastering her craft through the therapeutic experience of making music. The more time you spend with these songs, the more you want to see life through her eyes, even in the hardest of times. Her endearing humanity combined with her gift for songwriting helps make this one of the most remarkable albums of the year.

Soft Sounds From Another Planet is out now on Dead Oceans.