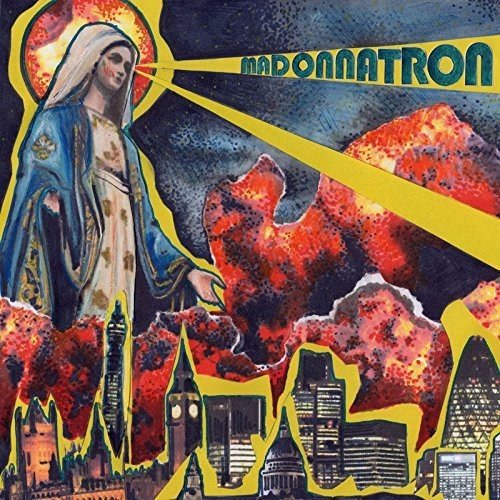 Madonnatron manage to combine elements of all of my favourite London bands of recent years on a debut album that could well be the injection of pure feminist (in their own words) ‘witch prog’ the south London experimental punk scene has been so far missing. On ‘Headless Children’ they are more reminiscent of Lola Colt than labelmates Fat White Family. But whereas Lola Colt’s, at times nomadic noodlings become ever widening circles of hell, Madonnatron is more a short sharp therapy. Fat White Family’s acute sense of the absurd is present but served with home-made lemonade instead of jet fuel and Shame’s political angst is present on riot grrrl-esque ‘Mother’s Funeral’ and particularly on ‘Bad Woman’’s glorious change of speed as it suddenly, somehow becomes a punk staple. And that’s Madonnatron’s attraction. Stylistically they are all over the place, like a radge Go Team or garage girl Beta Band. And that album cover is an instant classic.

It’s a debut that is raw, loose and risque but as these things tend to be half-baked anyway, that is their lo-fi appeal, too much of it drifts towards totally forgettable wailing as they seemingly forget when, or how to wrap it up or add a double chorus. It’s one thing to be under-rehearsed but another to be, on occasion, entirely unlistenable (‘Be My Bitch’) or just plain boring (‘Wedding Song’). ‘Glenn Closer’, apart from the incredible name that promises so much, is Fat White-lite, topical psyche about (something, something “Twitter”), and on (something, something “coke”), who really knows what, while elsewhere lead single ‘Tron’ is seemingly lacking much of a chorus even on repeat listens.

But that’s a touch unfair on Madonnatron because the good moments outweigh the less well thought through ones. On their more refined and poppier tracks such as The Go Gos/C86-like ‘Violent Denial’ and the sleazy and dangerous ‘Sangue Nuef’, with its great fuzzy bassline and Moroccan pipes, they cement their position on one of the UK’s most fiercely indie labels, Trashmouth Records, by offering glimpses of wonderful originality. They have kept it short at ten tracks, the danger to spew out any old guff towards the end mercifully avoided, and on closer ‘Cat Lady’ Madonnatron even hint at an intriguing alternative direction with some lovely harmonies, tighter production and, basically more song-shaped cavorting. It’s not quite Haim, mind, as it bobs along increasingly channelling the golden gutters of a Hollywood bad trip circa 1969 and the trademark underlying unpleasantness is never far away.

Overall, a promising though not great debut and hopefully not the last we will hear of Madonnatron.