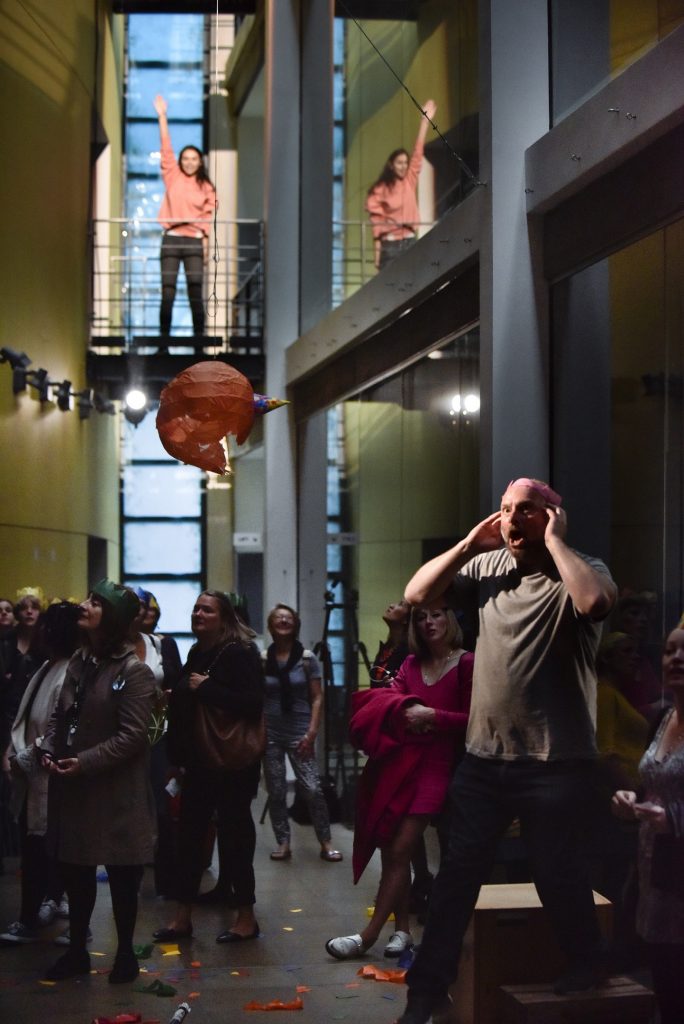 Going by the blurb in the handy, pocket-sized programme, Party Skills For The End Of The World could be awesome, or it could be something akin to a horror movie, but instead of watching it – you’re in it.  No thanks to “industrial action” affecting trains, a grumpy shuttle bus driver to another station, the ridiculous layout of said station, a missed train, and rude station staff, pretty much nothing is going to plan and I’m already thinking of ways to escape to the cinema and screw this, yeah?  Add to that the fact that Salford basically wants you to guess at street names, I arrived over half an hour late, fed up, and my God, could this day get any hotter?  Thankfully, I’m not the only one and soon a nice, cheery young woman appears to take us inside.

The event is in what I’m assuming is one of the university’s buildings – The Adelphi Building, as it’s called – and I have to admit to being somewhat sceptical about the whole thing.  I mean, I’m not exactly in the mood for a party, so to speak.  But what exactly are Party Skills For The End Of The World?  And why would there be a party?  Surely there are more important things to consider if the world as we know it has ended?

As it would turn out, the organisers etc, have anticipated my questions and provided Party goers with a number of survival skills.  To the far left of the entrance, is one almighty mess of orange peel (so that explains the slightly overbearing scent of orange…) and discarded paper party hats. Nearby is a mini bar which extends to alcohol and tiny bottles of water for quite frankly extortionate prices, sold from what is essentially an adult-sized pull-along cart and two crates.

Further down the corridor is a small workshop on how to make an arrowhead from a teaspoon.  On the opposite side is a room with an array of critters and animals made from food – lemon mice and aubergine penguins are on display in the window  Back up the corridor is a small space dedicated to the learning of magic tricks.  In one tiny room, is a chap, a table, and various lengths of rope.  I’m invited in to tie some knots – something I haven’t done since my brief time with the Brownies as a child.  It’s amazing how much I forgot, how much I forgot I remembered, and just how much I know nothing about tying knots whatsoever.

Wandering from room to room over two out of three floors of ‘skills’ it’s clear that not only are we taught how to survive should the worst happen and the world ends, but also how to have fun in the face of such a terrible future – folding napkins (just in case you feel like having a dinner party), how to make pepper spray (because if the worst happens and the world is overrun by either zombies or bad people/being in general, it can buy you some time to escape), how to punch, how to pick a lock, how to write a speech, and how to make balloon animals.

While watching a lesson on how to make a dog from a balloon, the power cuts out and everyone is directed down several flights of stairs – and then I’m sent to a rickety old lift that takes two people and several attempts to close the door to move – down to a large, dark space where I find two drummers, loud dance music and computer generated images.  Out of nowhere, a man takes to stage and silently instructs people to sit down.  He begins a speech/strange monologue about fear and about what people fear: that the world is run by thieves and liars; that when we die, we either die quickly and never getting the chance to say goodbye, or we die slowly and therefore painfully; that we don’t have children; that we don’t marry; that we do marry someone but they’re not the right person and we know it…  None of this is encouraging and the atmosphere around me is heavy, like everyone else is pondering the same thing at the same time.  If this is the future – the real end of the world – well, we’re all doomed, I’m afraid.

And then there’s silence again.  A screen towards the back catches my eye as it reads the words How To Dance.  Cue loud dance music and everyone everywhere dances along.  A countdown from 10 begins after a short while and then there’s a complete blackout.  Torches made from plastic milk bottles shine and a young lady playing the trumpet slowly leads everyone towards the back of the space where mysteriously, there’s yet another small space.  A speech is given – made by everyone in the skills bit upstairs – and a joke is told about a magic dog.  Confusion is sensed all around and then out of nowhere, lights go up and Beyonce‘s ‘Crazy In Love’ booms out from speakers around the DJ booth.  There’s an actual bar too, and suddenly the crushing despair that followed the speech/poem is gone and everyone is happy and in the mood for a party.

There are various small rooms around this space, and each one has something different: a games room that features board games from years gone by (Battleship, Mousetrap, dominoes, Trivial Pursuit, Pictionary, et al), darts, and skittles made from empty bottles; a quieter space lit by lamps with bulbs that mimic candle flames; a silent film and piano where you’re invited to provide the soundtrack to the movie – if that’s not a metaphor for life – right now, and in the imagined post-apocalyptic future – what is?  Another room looks like a place to relax at first.  On the chest/box in the middle of the room is a pair of scissors and sheets of paper.  The ceiling, however, is covered in hundreds of tissue-paper pom poms.  Seriously, it’s like something straight 0ff of Pinterest.  In yet another room is a small lounge area with the majority of the floor space taken up with a Scalextric and cars.  The lampshades are made from biros and actually, the effect is really pretty.

If this is what the world looks like after the apocalypse, it’s not so bad after all.  And now I know how to make pepper spray and fold a napkin, the world had better look out.