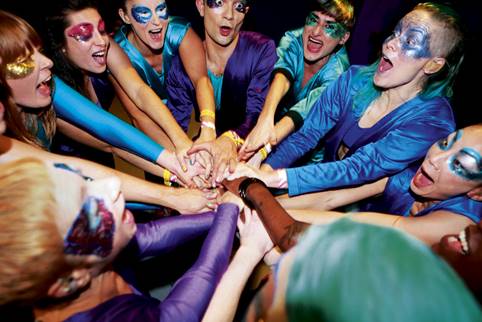 The Knife have announced the release of “Shaking the Habitual: Live at Terminal 5” a live film, live album & photobook documenting the Shaking the Habitual Tour. It’s due for Release on the 1st of September via Rabid Records, watch a trailer here:

“In the process of making “Shaking The Habitual”, we realized that it was time for us to question the concept of The Knife in a wider sense. Or, rather, we wanted to challenge the idea of The Knife that had been created somehow. We needed to find a way to do and be what we wanted, taking the commercial dimension of The Knife into account only to be able to find ways to exist outside of it. For instance, we realized that the masks we used to wear in press photographs as a way to criticize the media’s obsession with the individuals behind the music had started to be seen as the opposite: as our brand or trademark, and as something mystical. The discussion of purpose and joyfulness started all over again, this time in relation to whether or not to perform the album.”

“Concerts are boring, but dancing is fun,” curator and friend of the band Kim Einarsson suggested one day. “Instead of reproducing the stereotypical way of performing electronic music – two people behind a laptop – maybe you should be dancing to it.” And so, the concept of the “Shaking the Habitual” tour was born, with Einarsson and dance producer Anna Efraimsson as creative coordinators.

“Since neither of us had ever danced on stage before, we decided to collaborate with the choreographer Stina Nyberg, along with a group of dancers from different fields and backgrounds. We decided that we wanted the show to be a collective effort both as process and outcome, meaning that everyone in the team would be involved from the outset. We started to consider ourselves as an amoeba – a type of single-celled organism that has the ability to alter its shape and that for practical reasons team up with other cells or organisms, no matter how different – and we searched for ways to communicate that feeling to the audience. We quickly came to the conclusion that in order to do so, we would all have to play the roles not only of dancers, but also of singers and musicians, performing as one shifting unity.”

On the last leg of the tour, in the autumn of 2014, photographer Alexa Vachon joined The Knife to document their journey. These intimate portraits have been collected in a limited-edition Photo Book chronicling their adventures. “With this book, we invite you to share some of the moments of Shaking the Habitual: The Show, an experience that has been challenging, educational, inspiring and filled with love for both of us. We hope you will enjoy it as much as we did!”

“Shaking the Habitual: Live at Terminal 5”, will be released by Rabid Records on 1 September as a live film and live album, along with a limited-edition Photo Book documenting the tour.

A screening of the film will take place at the Bio Rio Cinema in Stockholm on 30 August.

1 thought on “NEWS: The Knife announce the release of ‘Shaking the Habitual: Live at Terminal 5’”