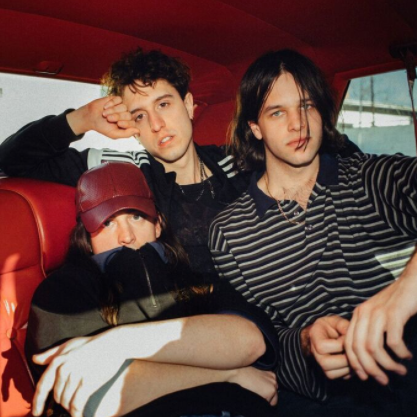 Brooklyn’s Beach Fossils are in a celebratory mood. Their third album, Somersault, was warmly received in June and tonight they get to play the wonderful Hare & Hounds venue in the Kings Heath area of Birmingham, to an appreciative crowd.

Before they tread the H&H boards, though, all the way from Cambridge (England) come Nervous Conditions, a truly remarkable eight-piece band numbering in its ranks, amongst the usual suspects, a saxophonist, a violinist and that ultimate “Why don’t more bands do this?” feature of twin drummers. Though they look young enough to be Mark E. Smith‘s grandchildren, they resemble The Fall (early period) in more than one way: that dual percussion onslaught for a start, plus the driving repetition; there is something about the vocal delivery too that brings to mind MES. Nervous Conditions are no mere copycats, however, and work their way through an uncompromising 50-minute set that hints at genius at the same time as testing the audience’s resolve (the third track was a quarter of an hour-long by itself!). The band are apparently on the verge of releasing their debut album and it will definitely be one to watch out for.

By contrast, Beach Fossils already have a considerable catalogue of short(ish), jangle-pop jewels on which to draw and they begin with a brace from their second record; the Drums-y ‘Generational Synthetic’ and the harder ‘Shallow’.

The band play an incidental bossa nova jam to cover up for Tommy Davidson tuning up a guitar; frontman Dustin Payseur announces “It’s open mic night at the Hare & Hounds, featuring a Beach Fossils song, another Beach Fossils song and then maybe another 10 Beach Fossils songs”. The band clearly aren’t taking themselves too seriously.

The finest moments, though, are from this year’s subtly brilliant Somersault, on which they have moved from their lo-fi roots to a lush, far more expansive sound. The record’s opening track ‘This Year’ gets a big cheer, before a couple more from the album follow in quick succession, ‘Down The Line’ and the sumptuous single ‘Saint Ivy’, on which keyboardist and trumpeter (is that a word?) Daniel Fox does an excellent job of recreating the strings of the album version.

The highlight of the set is the powerful ‘Be Nothing’, another new one, which is a slow / fast / slow masterpiece of a song. Relative oldie ‘Careless’ changes the tone, increasing the pace, while another favourite ‘Sleep Apnea’ (sic) takes it down again – it’s a stunning song.

‘Closer Everywhere’ is another Somersault instant classic, and closes the main set. “This isn’t really the type of venue where you can leave the stage and come back for an encore, so we will just stay here and do another couple” say the band before Fox plays a ‘minuet’ mixed with a snatch of Happy Mondays’ indie night staple Step On’ to punctuate the difference between the end of the show and the encore.

‘Crashed Out’ and old single ‘Daydream’ send the audience on their way, safe in the knowledge that they have experienced a band on top of its game.