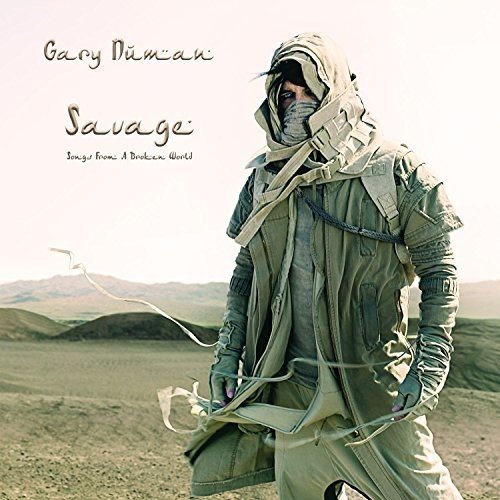 Although Gary Numan hitched a ride to fame on the coat-tails of punk, his musical style was not so much nihilistic as futuristic. Savage: Songs From A Broken World is, impressively, his 22nd album, and follows on from his last album, Splinter: Songs From A Broken Mind, which saw him get some of his best critical and commercial success for a couple of decades.

He may have had a ‘difficult’ relationship with the media over the years, but he’s been critically appraised by a number of artists across genres, who recognise what the man born Gary Webb has achieved. Now based in California with his wife and daughters, for some artists this would be the point at which they’d be re-writing their own version of Crosby, Stills, Nash and Young‘s ‘Our House.’ Gary Numan has never been that artist. This album sees him looking out at the world and being, frankly, fucking horrified by the status quo. If the album title didn’t make it clear, then the song titles on their own suggest that this is a fairly bleak view of the world: ‘Pray For The Pain You Serve,’ ‘ Bed Of Thorns‘ and ‘When The World Comes Apart.’ It is, in fact, a concept album.

Dystopia in rock is not a new idea – hell, Bowie’ Diamond Dogsalbum back in 1974 evolved out of his plan to write a musical based on the ultimate dystopian novel of them all, George Orwell‘s Nineteen Eighty-Four. Numan’s Savage (that’s very much as an adjective rather than a noun), is even more frightening than 2017. It is set in a post global warming, apocalyptic, Earth in the not-too-distant future. This is a place where there is no technology left (given how Numan has very much been the master of technology, it is easy to see how this would terrify him more than many other people). Most of the Earth has become a desolate, desert wasteland. Food and water are scarce and human kindness and decency are just a distant memory. Western and Eastern cultures have merged, more because of the need to simply survive than any feelings of greater tolerance or understanding (Numan has always been pretty anti-religion). It’s a harsh, savage environment, as are the survivors who still roam across it.

So far, a terrifying vision, and one that feels all too probable to listeners. As with Deerhoof‘s new album Mountain Moves, the election of Donald Trump as POTUS has informed the making of the album. While the Deerhoof album is a call to arms, the bleak viewpoint of Savage holds a mirror up to reality and shows us just how bad it could really get.

After several listens, I wonder if perhaps the concept of the album (as opposed to it being a concept album) does perhaps promise more than the album actually delivers. There are definite album highlights like ‘Mercy‘ and ‘Bed of Thorns.’ It needs to be listened to as a whole, rather than as a few tracks on a playlist, which is fair enough, but even after several listens it feels rather more like an album to be appreciated and admired, rather than actually enjoyed. What is most impressive is the incorporation of Egyptian music into several songs, and on the evidence of the sounds herein, I hope that he does get the opportunity he desires to work on film scores.