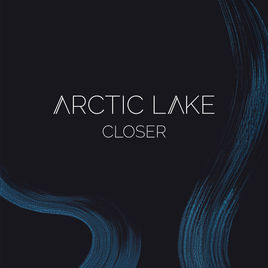 In some ways, Arctic Lake really live up to their name. Over the course of the London trio’s new five track EP Closer, they produce music that feels icy, glacial and watery – including the falling motion of piano keys resembling waterdrops on ‘Forget About It All’ to the subtle pouring rain behind ‘Living Under You’ and the shivering violins on the atmospheric opener ‘Prelude’. Their ambient pop could stand alongside Icelanders Sigur Rós in soundtracking long panning shots gliding over the North Pole because it feels like it’s made in a cold, echoey uninhabited surrounding.

Yet their lyrics and the personality of lead singer Emma Foster are their man-made fire in the winter expedition. They are pleasantly warm and welcoming. Rather than alienate people, they wish to bring communities together in one big huddle. One aspect of this friendliness can be heard right at the end of the album. It’s a nice touch that Arctic Lake have, including happy conversations between each other and themselves laughing and enjoying each other’s company. It seems to express a message of laughter and friends are the best medicine.

Two years ago in an interview, Arctic Lake spelled out clearly their goal in music as being to “make audiences connect with us, feel something and hopefully relate to the music“. To do this they write emotional words that – rather than state particular you-had-to-be-there incidents – could apply to various different situations (from relationships to life decisions) and be universally understood. From the urge to be independent in ‘Living Under You’, to the protection of vulnerability (‘Too Close’), reassuring comfort (‘Forget About It All’) and the strength to deal with the high and lows of life on ‘Further’. This has the potential to connect to a large crowd, especially a youthful allegiance based on Arctic Lake’s mindset. However, it’s lyrical vagueness also threatens the possibilities of the songs living long in the memory or being culturally significant.

The same problem goes for their musical style. Their beautifully made EP Closer is cohesively restrained, peaceful and delicate but it sounds like too many other artists over the last five years. Even those bands they can be compared to, including London Grammar and Daughter, have expanded their sound – the former with a large balladry-accompanying orchestra and the latter with a rockier grittier edge and songs tackling dementia.

Yet Arctic Lake has the luxury that neither of them have. The freedom of self-releasing their own material. This should gave them the desire and license to be more creatively free and perhaps a longer album in the future will bring out a more a unique side of their capabilities. Having said all that, based on the EP’s minimalist artwork (which would disappear in a sea of album choices in a record store), it’s possible that simplicity is actually the image they are going for.

The self released Closer EP is out now.