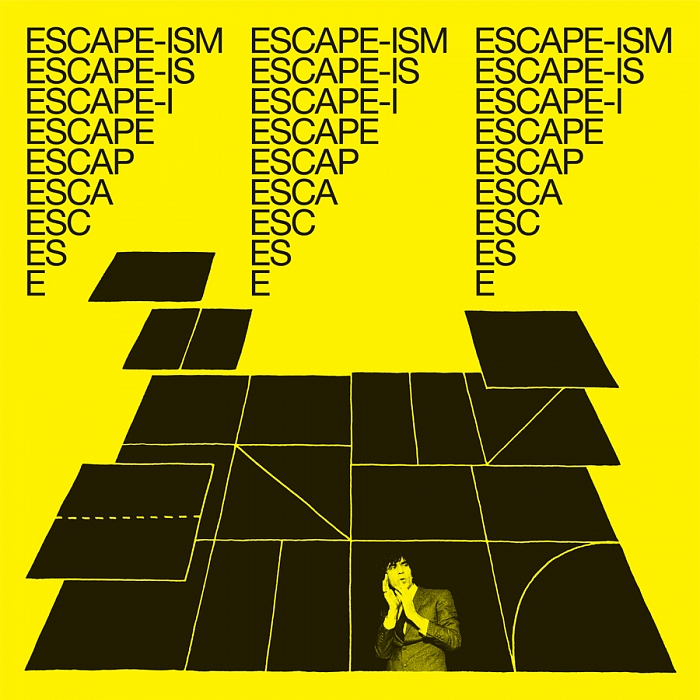 If you know of Ian Svenonius, you probably know he’s worth paying attention to no matter what he’s up to.  Whether it be fronting a band, writing a book (titles include The Psychic Soviet and Censorship Now!) or going solo with his latest project Escape-ism, he’s an undeniably ever-intriguing underground cult figure.

He started off in the 5-piece Nation of Ulysses, a suited-up hardcore band with a trumpet player, whose debut album named 13-Point Programme to Destroy America (1991) proved influential for its ambitious ideology.  There’s not much use in comparing what Svenonius is doing now to music he made in his youth though a pattern is clear.   Following this he’s formed multiple cross-genre bands including The Make-Up, Weird War, Chain & the Gang and XYZ.  His lyrics in all of these groups adopted absurdist humour and distinctive political commentary.

And that’s what makes Escape-ism a bit different. Beneath all the layers of being in a loud band, Svenonius seems to show a different side with his first solo effort.  Having played live as Escape-ism for at least two years, he’s brought out debut album Introduction to Escape-ism, a stripped-down minimal take on his irrepressible fun songwriting style.  Mostly incorporating just a guitar, drum machine and his highly-expressive vocal range, Svenonius covers all sorts of things across nine tracks.

Opener ‘Walking in the Dark’ describes a simple encounter accompanied by appropriately straightforward but dark sound effects.  ‘Lonely at the Top’ takes a more tense tone with Svenonius’ trademark humour – “I wanna get down but I can’t, I’m scared of heights.”  It contrasts well with the pick-me-up tune ‘Rome Wasn’t Burnt in a Day’ and the hypnotic beat of following track ‘Iron Curtain’.  The video for the latter helps to make the song seem much bigger than it is.

There are hints of more serious social commentary such as “when we wanted something that we could call our own / well they brought in the bank and took away our home” on ‘They Took The Waves’.  This song and the following  ‘The Stars Get In The Way’ also make use of some nice saxophone parts.  ‘Crime-Wave Rock’ closes the album, in-keeping with Svenonius’ nod to the link between criminal activity and rock music, something he’s covered before with Chain & The Gang and in his book Supernatural Strategies for Making a Rock ‘n’ Roll Group.

As a long-time fan, I’m so used to listening to Svenonius’ many bands and hearing him express himself over loud garage-rock guitars, infectious basslines or a blaring trumpet.  Hearing his voice so bare is simply quite odd.  Moreover, from the man who once said “to me good music is actually a form of comedy […] that doesn’t mean it’s meaningless, that it’s just a joke – jokes have a lot of meaning”, analysing his lyrics can lead to reflecting a lot on the concept of being genuine in art.

With this album, you may find yourself questioning if he’s really talking about how he feels such as on the seemingly deeply personal ‘Lonely at the Top’ or ‘Almost No One (Can Have My Love)’, or if he’s simple is using certain phrases or adopting a character for the sake of humour.  Nevertheless, Introduction to Escape-ism is an enjoyable listen for his first proper solo album though you may have to be in the right mood for it.

Introduction to Escape-ism is available from 10th November. Escape-ism European tour dates below: