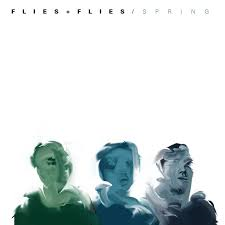 Flies+Flies have already garnered attention from still coolish radio’s Huw Stevens and music publications with things like “your next favourite band is on us” in its descriptors. So, all and all, I guess you should call them a… buzz band… *absolutely starts fucking howling with laughter*

*comes back 45 minutes later after regaining composure at the very good joke*. flies+flies’ debut album Spring is a sometimes stunning listen which ultimately sinks under the weight of its heady ambition. It’s a promising debut from a band bursting with big ideas and ambition for the music they want to make. I respect the hustle.

Opener ‘Sinkhole‘ is something special. Radiohead-like witching hour guitar pulses guide the song down toward a cacaphony of stabbing cello, grime piano stabs and entrancing, hypnotic vocal vortexes, providing the overall impression of creating genuine drama and menace.
Similarly, the boiling over synth bridges and black as winter classical slashes within songs like ‘Milk and Honey‘ and the groove and dance breakdown beats of ‘Memo‘ are examples of genuinely refreshing and new takes on UK alternative rock this year.
The outro of ‘Call My Time‘ is some very pleasing Arpeggio-like Radiohead in terms of its skittish beats and clean guitars.

It’s an involving and ultimately overwhelming listen, one which I found it difficult to get through in one go; partly due to the busy-ness of its influences (also an endearing quality) – these being the dank, inner city subterranean Gothic Spirographs of bands like The XX, Radiohead and Portishead; it may also have been, however, because a collection of songs by a band previously described as being “embedded in the consciousness of London” isn’t, in 2017, going to likely be a zany, Blur-like romp through the streets of Carnaby Street.

It becomes a slog midway through though, and I do wish the band had reigned themselves in to what could have been a very potent, seductively fresh blend of computer-based influences and classical instrumentation and clean indie guitar work.

London is a schizophrenic, Darwinian-based bloodfeud of a life, where many appear to consider even walking down as the street as a competition where the enemy must be crushed at all costs. I don’t want to be there in its consciousness on record for long. It’s still a very intriguing start.

Spring is out now on Precious Snowflake Records.