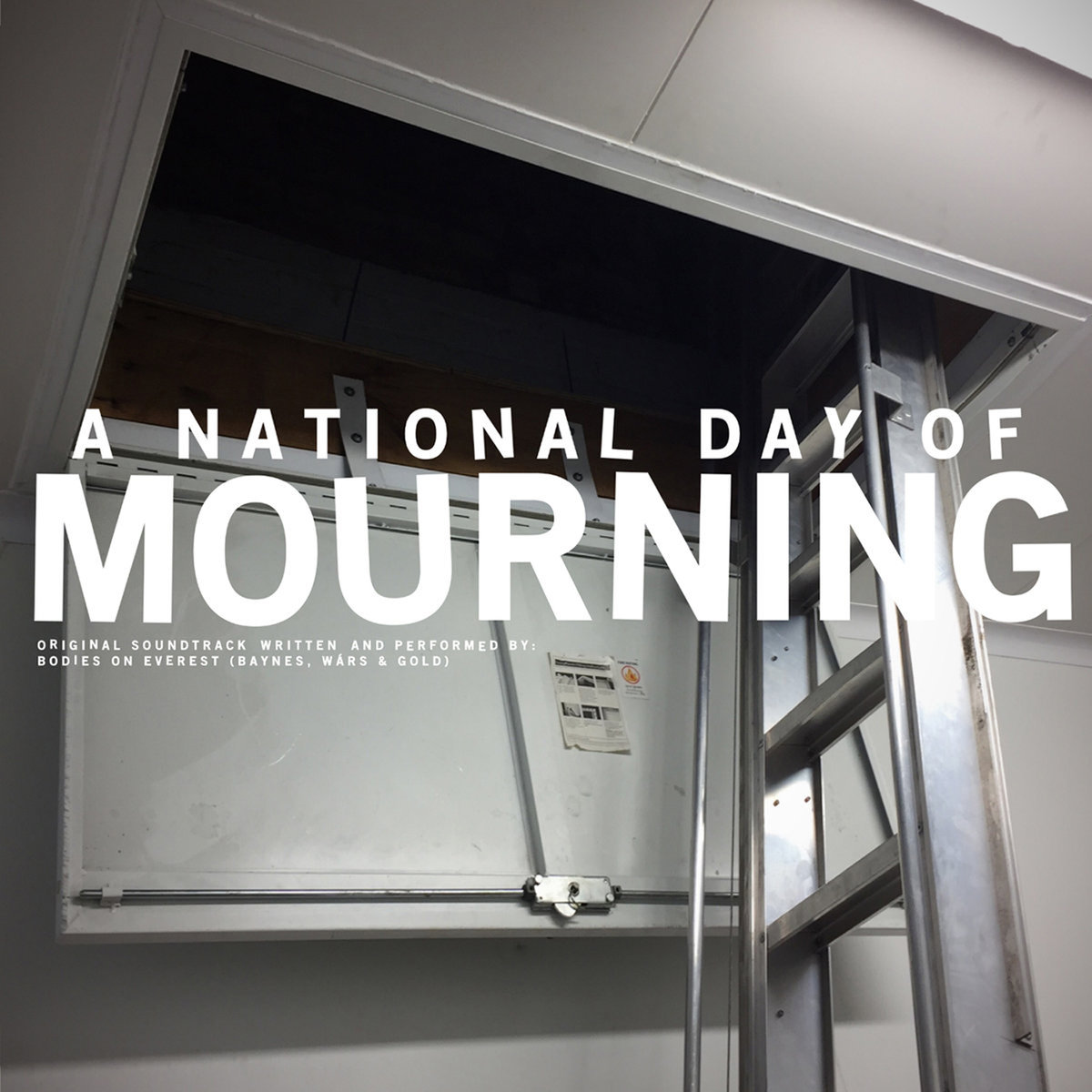 A band has never been so brilliantly and aptly named, the frozen monuments that act as morbid and bizarre measuring posts at the roof of the world, higher than the beasts lower than the angels, and go some way to summing up the often macabre and desolate, harrowing and godforsaken majesty of Bodies on Everest. The looped “I am a ghost” sample that opens the first single from the band’s third album, like a number station recording from beyond the grave disturbs (as it should and is intended to) before the repetitive percussion almost melts into bass shreds, recorded so far in the red as to rival the cosmic radio background for natural interference (‘Who Killed Yale Gracey?’), may already have you hooked. Make no mistake this is epic stuff.

Like the broken silence of static on a late night TV, National Day of Mourning exists in a netherworld of ranging distorted guitar tones underpinning the compositions; and subtle adjustments in frequency where bass motifs pop in and out of existence as, squint your ears, barely anything seems real anymore. The band’s sound pulsates as a distant cousin to the playlist of a subterranean industrial techno club spawned from the same demonic creator as Newcastle’s Pigs Pigs Pigs Pigs Pigs Pigs Pigs, so it is no coincidence that National Day of Mourning is released on the city’s Cruel Nature Records headed up by Steve Strode, a veteran of the north east and Bristol noise scenes, the label being the perfect mistress for the band’s way out there drone-rock. Dalliances with death metal and low-pitch doomy discord are occasionally and expertly incorporated into the six five-to-eighteen minute tracks (‘Suspicious Canoe’ at five and a half minutes is a grotesque radio edit) but it is the cursed bass/drum/bass sludge theme and abrasive production that really excite. The drums are slow, the bass jars and jostles equally. Possessed of a volley of ideas, a board of electronics (the compressed beats and distorted flange of the vocals on ‘Tally of Sevens’) and a dark imagination (the attention to background detail during the monologue section of ‘Gold Fangs in Enemy Territory’) that makes National Day of Mourning a tour de force of its genre. Vocals, or what I will describe as vocals, exist intermittently as terrified screams almost lost in the background of a cavernous nightmare or suicidal spoken word segments that enhance the overall enthralling (but) dystopian, nay, super-apocalyptic narrative (‘unreleaseddeathvideo.flac’ is like listening in on hundreds of simultaneous panic attacks before retuning to listen to the commentary). Those that have read Mark Danielewski’s House of Leaves will be familiar with the paranoid claustrophobia of Holloway Roberts’ incursions into the otherworldly labyrinth under the house or, for those less well read, Jim Hopper’s forays into The Upside Down in Stranger Things.

As National Day of Mourning reaches its suitably elongated finale as if coming down from a Hieronymus Bosch helltrip back into the Garden of Earthly Delights you get the sense that it could only be mortgages, day jobs and microwaved meals that separate us from this unearthly laceration and it is all real after all. Superb.

A National Day Of Mourning is released on 29th April through Cruel Nature Records.