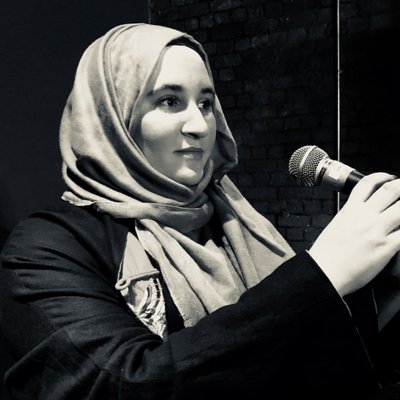 One of the most enriching, forward-thinking, fastest-growing online creative communities flourishing right now is the Poetry community, especially in those scenes that center on marginalized voices — Women, POC, Neurodivergent, and LGBTQ. Poetry Spotlight is a feature aiming to showcase the work of some of the most talented creators we’ve discovered making waves on the Internet literary circles, inside or outside the mainstream. In our eighth installment, we focus on the work of Cardiff-based writer Hanan Issa.

Hanan is a mixed-race writer and poet from Wales. She has performed at the Wales Millennium Centre’s International Women’s Day, at numerous events across the UK, as well as on BBC Radio Wales’ Arts Show. She has appeared on both major Muslim TV networks (BMTV and Islam Channel). Her work has been published in Banat Collective, Hedgehog Press, SISTER’s magazine, sister-hood magazine and MuslimGirl.com. Her winning monologue was featured as part of the Bush Theatre’s Hijabi Monologues project in 2017. She is also the co-organiser of Cardiff’s first BAME open mic series entitled ‘Where I’m Coming From’. In May she will be on the judging panel for Warwick university’s ‘Two Chairs’ poetry competition. She is also currently working on a film project in partnership with Film4.

by radio buzz.
Your head’s
propped

on your hand.
So bored,
scanning

cars for distraction.
A couple
adjacent,

in the back,
fully veiled,
she

leans forward speaking
so softly,
he

My diversion found,
I start
deciding

about her life,
his piety,
arguments

about red shoes
he forbids
her.

A second glance:
she laughs,
infectiously,

and leans back
to adjust
herself

and the baby
she breastfeeds
contentedly.

The cup is the first step.
A delicate teacup suggests high teas, decorated by lace napkins,
and pale gloved fingers
that reach for neatly cut sandwiches,
while the talk slices up an Empire.
A mug of cha to calm the nerves in a crisis is a match’s half-time helping,

that synchronizes switches across the country. But are the builders enjoying their brew aware of the painful past
contained in its dried leaves?
A politely hidden history that traded tea for the poppy. Or that, once in Boston, pouring tea into water stood

for discarding colonial control.
A sorrow infused over time,
seeping bitterness into boiled water.
Although, when mixed with mint,
jasmine, star anise, or cinnamon,
the taste of history is steeped in the present:
a place we all try to infuse with the taste of us. Meticulous ceremonies that celebrate friendship:

“Gentle as life, strong as love, bitter as death”. Chai is poured from on high,
spilling along the Silk Road to Tescos. Merging bitter matcha with sweet shai, soaking into bara brith raisins overnight. Cultures and languages permeate life, weaving through our flow of experience, iridescent in the chaos.

This Would Make Good Material For A Poem

And here’s a video of her monologue “With Her Back Straight”, performed by Nadi Kemp-Sayfi and directed by Milli Bhatia, for Hijabi Monologues London at the Bush Theatre.