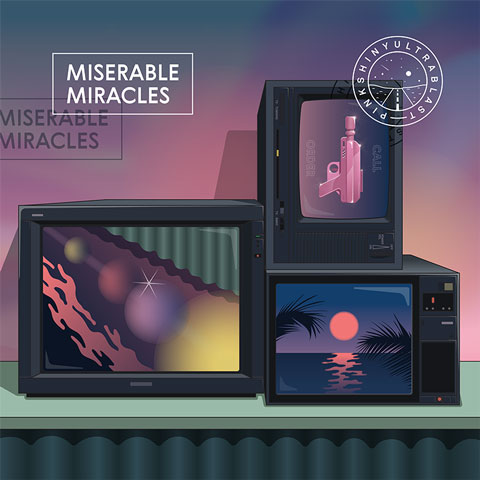 Pinkshinyultrablast have been trading in elegant noise since 2009, when their debut E.P. Happy Songs For Happy Zombies appeared. It wasn’t until 2015, though, that the Russian band issued their first album, the superb Everything Else Matters on all manner of glittered and splattered plastic that seemed perfectly in keeping with their name, and somehow also their sound; a complete aesthetic.

Following up 2016’s equally splendid Grandfeathered comes Miserable Miracles, which extends on the traditional touchstones of My Bloody Valentine and Cocteau Twins and brings a synthpop element to the sound. It’s a fascinating combination and reveals itself right from the off, the fast-paced opener ‘Dance AM’ setting the scene for a highly engaging album. It’s a really natural progression – they aren’t the first band to bring out the vintage synth sounds, but they have totally kept their own identity in doing so; long time fans will hopefully embrace the new direction. If you enjoyed the remixed version of ‘Kiddy Pool Dreams’ (fabulously re-titled as ‘Kitty’s Cool Beams’) a couple of years ago, then you are in for a treat. If you haven’t heard it, it’s recommended.

A couple of songs were released as singles late last year and served as tasters for the record: ‘Find Your Saint’ is one of the most accessible songs that the band has served up so far, and bridges the gap from the ‘old’ to ‘new’ sound very effectively – it wouldn’t have really sounded out of place on Grandfeathered. ‘In The Hanging Gardens‘ meanwhile appears as the penultimate track here, and is more of a grower and a brave choice for a single, Lyubov’s stunning vocals hitting the mid-point between Elizabeth Fraser and Stereolab‘s Laetitia Sadier, while not copying either. There could hardly be a greater compliment.

Elsewhere, ‘Triangles’ comes over all Kraftwerk, but again those heavenly vocals take the song somewhere else entirely, while ‘Eray’ gets some squelchy synths into the mix, bringing a little A Broken Frame-era Depeche Mode to the party.

And then, a complete tangent in the centre of the album: ‘Blue Hour’ is a beautiful instrumental that gently ebbs and flows and stops the so far uptempo album in its tracks. It goes nowhere, really, but does so with such style. It is followed by ‘Earth and Everywhere’,  another beat-less instrumental in stark contrast with the first four tracks but totally in tune with ‘Blue Hour’. It takes the listener into another world, its immersive qualities perhaps only comparable to Cocteau Twins’ collaboration with Harold Budd in 1986 (The Moon and the Melodies – buy it immediately. Even if you already have it), or perhaps Brian Eno.

‘Taleidoscope’ then picks up the pace again, the vocals and beats are back and sound even more rejuvenated for that half time contemplative intermission. After the aforementioned ‘In The Hanging Gardens’ comes closing track ‘Looming’, which is certainly the track most reminiscent of early period Pinkshinyultrablast – it has synths but has distorted guitars, (or it’s possible that they could actually be distorted synths), it’s euphoric and vital.

In Miserable Miracles, this fascinating band might just have made their masterpiece.