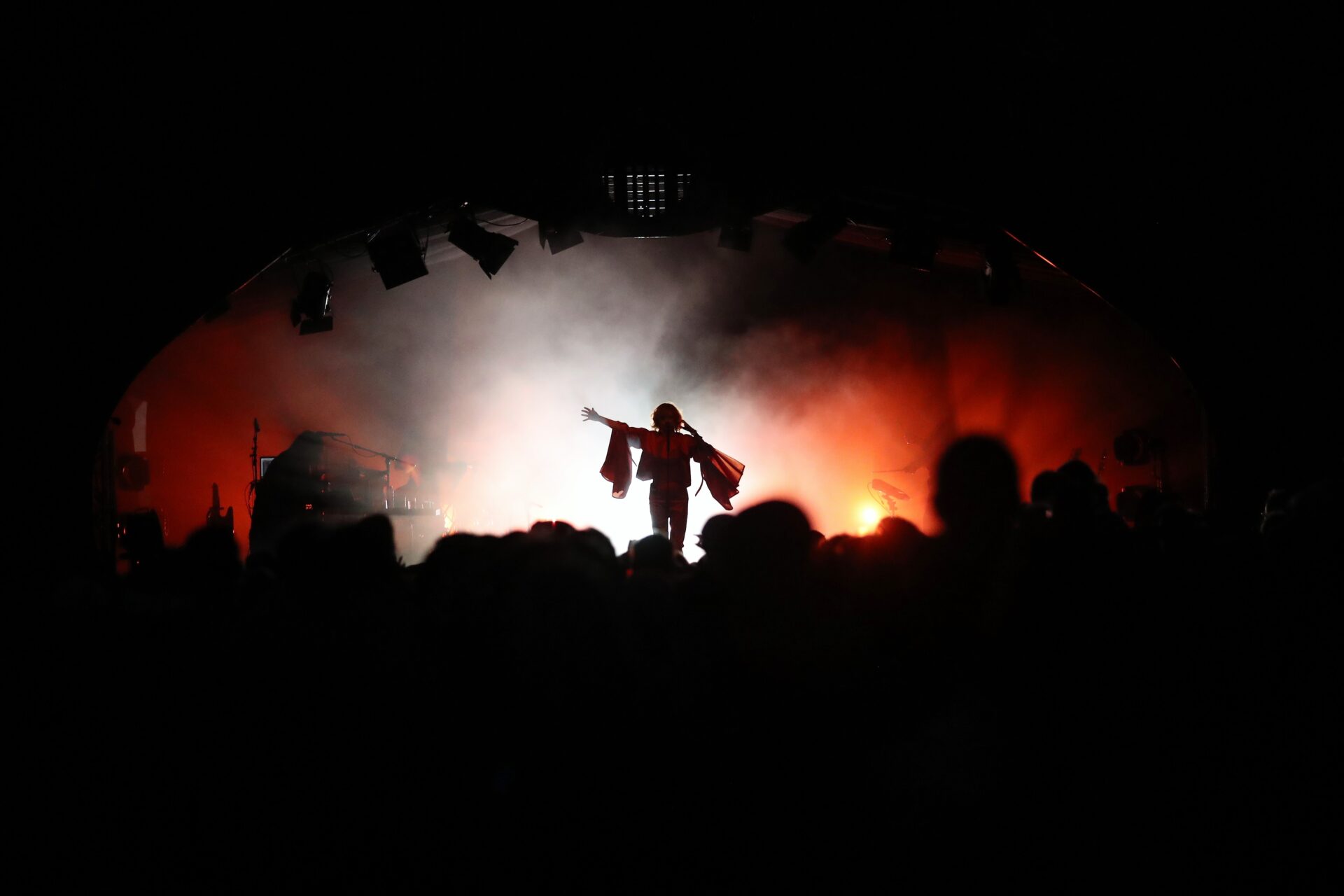 Probably the biggest single variable that any outdoor music festival has to face, and one over which it has absolutely no control, is the weather. The UK’s long summer heatwave came to an abrupt end on Friday as thunderstorms took hold and many parts of the country were hit by torrential downpours and high winds. As a direct consequence of the stormy conditions, Camp Bestival in Dorset was forced to close down its main stages on Sunday due to safety concerns. But even though it also had more than its fair share of heavy rain to contend with over the weekend, north Warwickshire’s Lunar Festival still carried on regardless, testament to its planning, execution and indomitable spirit.

Back after taking a year off, Lunar Festival has clearly returned fitter and stronger.  It has effected some fairly significant changes in the interim – not least with the physical lay-out of the site, but also by introducing the concept of 7 Elements (Listen, Learn, Move, Create, Taste, Relax and Laugh) – achieving this without losing sight of its fundamental desire to create an imaginative, alternative, anti-corporate cultural event. 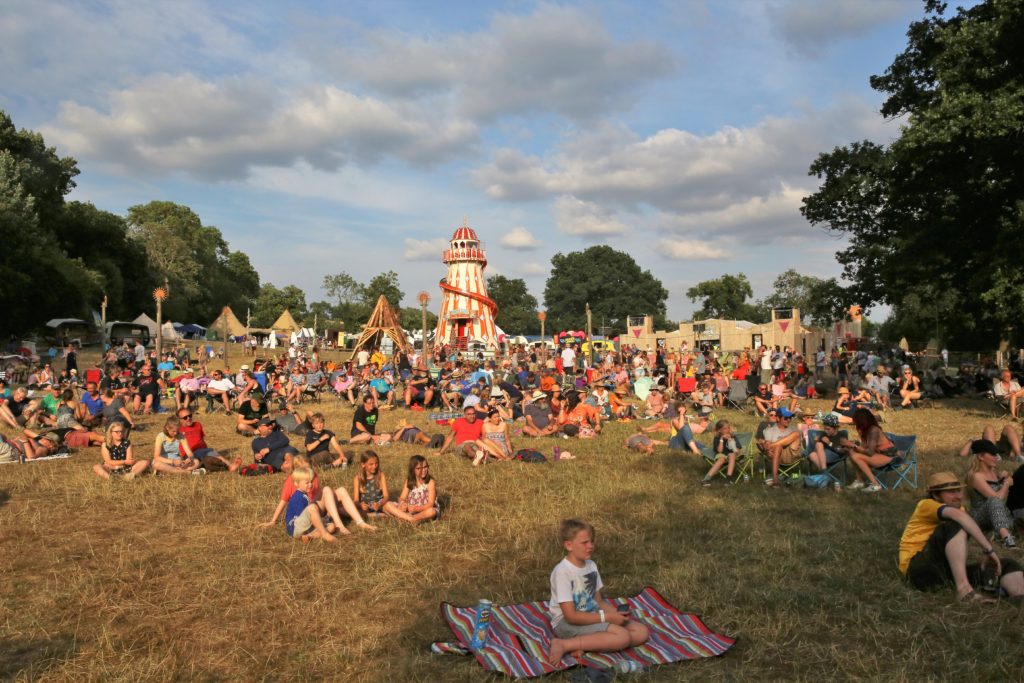 After Thursday night’s opening party (one hosted by The Pretty Things and the six-times world snooker champion Steve Davis performing a DJ set), Friday sees the festival start in earnest in what is glorious sunshine and with the site looking an absolute picture. The colourful helter-skelter still dominates this part of the Umberslade Farm Park skyline, but beneath it in the main arena the two main music stages are now placed right beside each other, nestling there so comfortably cheek by jowl. This new set-up enables you to experience an almost seamless flow of music without even bothering to move, as each stage alternates its musical acts one directly after the other.

Nabihah Iqbal picks up the sonic baton early evening and runs with it. Beneath the bright pop surface her guitar music spumes with a far deeper intent, something that resonates during a majestic rendition of The Cure’s ‘A Forest’. Brighton’s The Go! Team are the perfect festival band, all uninhibited energy, a wild collision of vibrancy and soulful pop where ‘Everyone’s A VIP To Someone’ and ‘All The Way Live’ (from their 2004 debut and latest albums, respectively) cheerfully co-exist alongside each other.

It may well now be nearly 45 years since the English singer-songwriter Nick Drake was found dead by his parents at their home, Far Leys, in Tanworth-in-Arden – he is buried nearby under the beech tree in the village churchyard – but his undeniable spirit is omnipresent at Lunar Festival. Over the course of the weekend a number of artists pay homage to Drake through cover versions of his songs – the best of which may well be Particle Kid’s inspired reading of ‘One of These Things First’ on Saturday night – but here in the Moonshine Barn this Friday evening the Northumbrian folk family The Unthanks interpret his mother Molly Drake’s songs. Her work does share much of her son’s melancholic essence, but in The Unthanks’ subtle grasp the finer emotional nuances of her words can also be found. 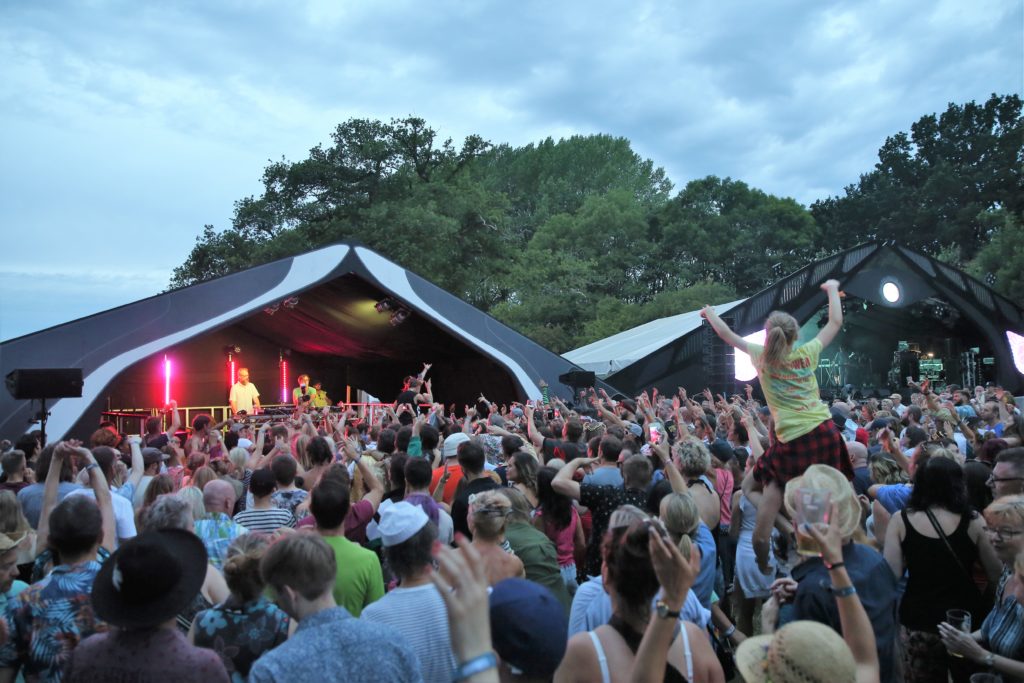 It is quite uncanny that two chaps who are fast approaching middle age and are armed only with a USB stick and an unerring ability to twiddle knobs and push buttons can suddenly get an entire field of people up on its feet. But this is what Basement Jaxx achieve courtesy of a marvellous mixtape of electro, house, funk and old school dance tunes that seems to operate in its very own time zone and yet still has enough room for snatches of Donna Summer’s ‘I Feel Love’ and ‘Somewhere Over The Rainbow’ from the 1939 film, The Wizard of Oz, before ending up with a tumultuous ‘Where’s Your Head At?’

The Malian husband and wife duo of Mariam Doumbia and Amadou Bagayoko have to be one of the African continent’s greatest cultural exports and for them to close out Friday night at Lunar Festival says just as much about the event’s standing as it does its diverse musical reach. With each passing year, far greater Western influences do seem to further eradicate Amadou & Mariam‘s more traditional sound but listening to their sparkling take on Afro-pop is still a consummate joy.

A fire-eater breathing flames into the night air in front of the main stage adds to the spectacle and the only disappointment in an otherwise superb evening’s entertainment is the fact that the longest total lunar eclipse of the 21st century is totally obscured by clouds.

Saturday awakens to sullen skies but before the heavens can well and truly open Coventry’s Candid put in a bright, effervescent performance on the New Breed Stage with a dual-guitar, Thin Lizzy-inspired set of melodic, heartfelt songs.  When the rains do come they prove to be no impediment to The Heliocentrics. Their hypnotic sprawl of psychedelia, futuristic jazz and funk – in which Barbora Patkova’s elliptical voice is a mesmerising focal point – is genuinely thrilling. 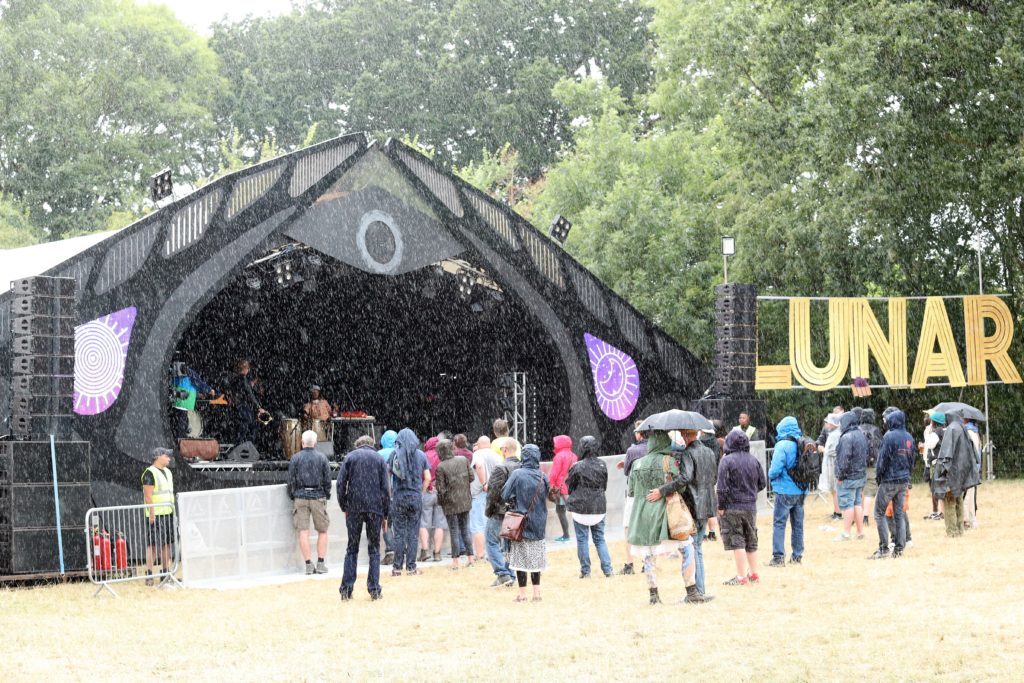 On Boxing Day 2015 in Leeds the River Aire burst its banks and almost destroyed Hookworms‘ recording studio and rehearsal space, the floods taking with them much of the band’s back catalogue and their then new recordings. Out of this adversity emerged Microshift, Hookworms’ wonderful third album which was released earlier on this year.  It is evident from this that no little downpour is going to stand in MB, MJ, JN, SS, and JW’s collective way. And so it proves to be as the five men break through the elements with a dynamic, thunderous torrent of noise that somehow crystallises swirling psychedelia with melodic intensity.

Just as Basement Jaxx had done the previous night in the main festival arena, with their live show Crazy P also create a right royal party atmosphere, albeit one that is inflated by the oxygen of a far more mainstream dance/disco history.  BLACKASH are a different beast altogether. A very loose “collective of (local) creatives”, these Midlands’ men of mystery do not rely on introductions; they merely unleash one thrilling riff after another. They open with ‘Meditation No. 3’ (from their only release, the 2016 EP Black Witch) and proceed to submerge us under wave upon wave of unflinching space-rock of the type probably not much heard of in these parts since Hawkwind created their live masterpiece Space Ritual. 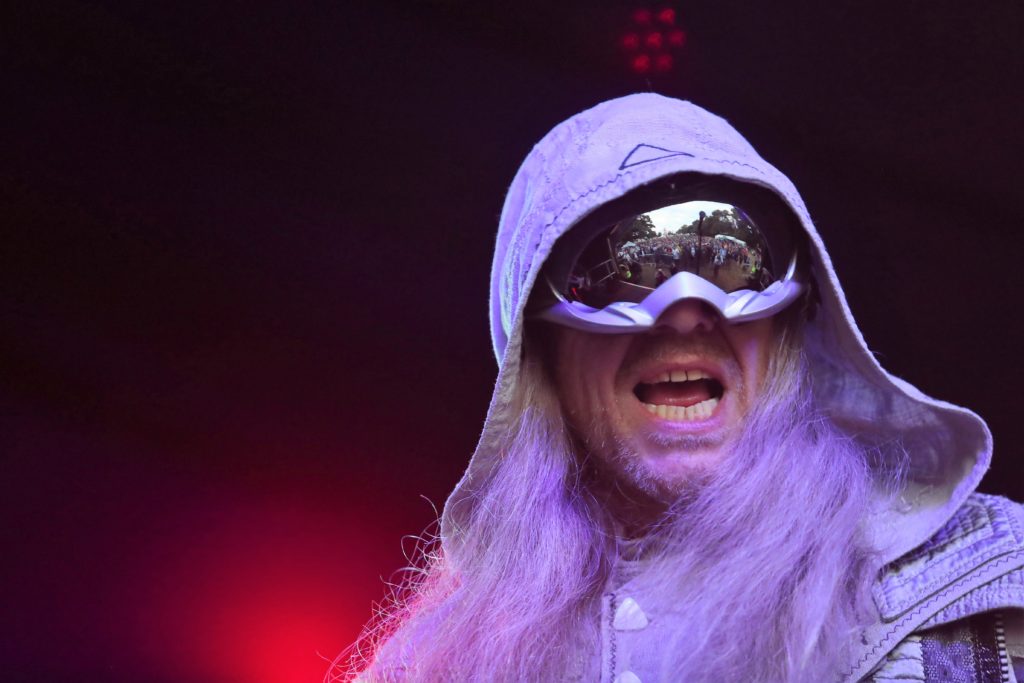 A week ago, Goldfrapp performed their first ever festival headline appearance at Deer Shed Festival in North Yorkshire. They follow it up here with their second and whilst they play exactly the same set, song for song, the Lunar show somehow feels even more adventurous, even more alive. Alison Goldfrapp – perhaps not someone who is best known for their levity – is in a playful mood, apologising for appearing here dressed as a carrot. The friendly vibe that Lunar Festival exudes is clearly catching. And it translates itself into what is an electrifying synthpop triumph. “I get high on a buzz. Then a rush when I’m plugged in you”, concludes Alison Goldfrapp, sentiments with which we all heartily agree.

The return of more adverse weather on Sunday puts paid to many people’s Lunar experience for this year, with huge gaps starting to appear in both the campsite and surrounding car parks.  All of which is a real shame because, apart from anything else, those who have left early miss what is undoubtedly the performance of the entire weekend from Jane Weaver. Since last appearing here three years ago and much like Lunar itself, Jane Weaver has gone from strength to strength. She arrives at Tanworth-in-Arden having spent the first part of the day at Stonehenge. And as she quite rightly points out, she has brought the cosmic vibes with her because her performance has an almost otherworldly quality to it. It just seems to shimmer through the raindrops, hanging there in some suspended state of disbelief at just how good this sound has become. ‘The Architect’ is positively spectral and the concluding coupling of ‘Don’t Take My Soul’ and ‘I Need A Connection’ creates a powerful statement of lysergic, mind-bending intent. 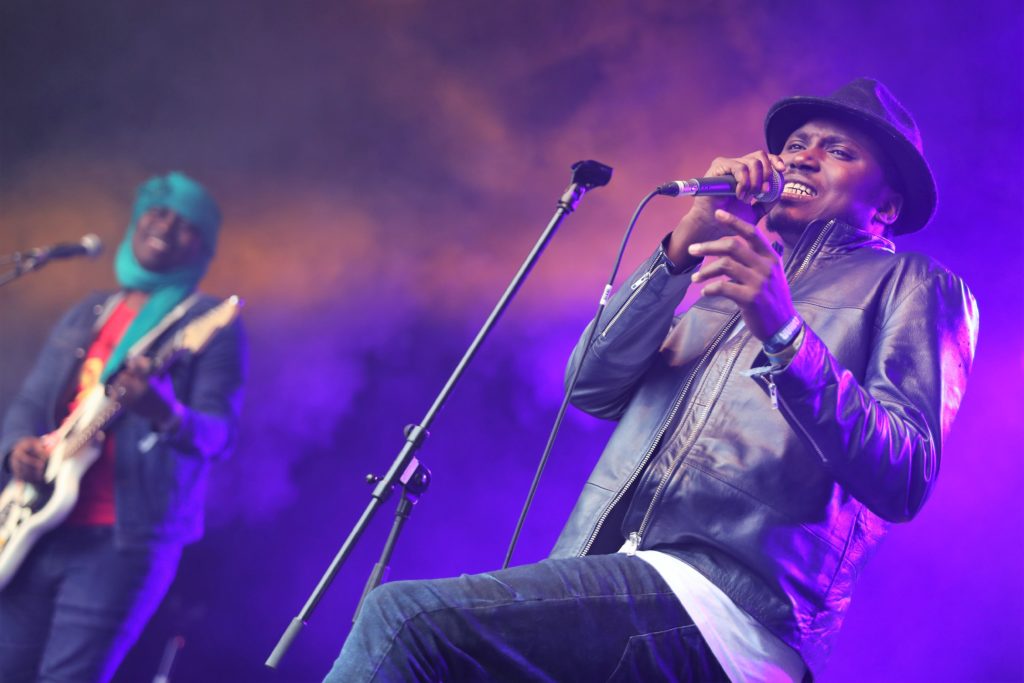 Fellow countrymen of Amadou & Mariam, Songhoy Blues effortlessly transport their Malian desert blues to other worlds. You can find subtle shades of Jimi Hendrix, BB King and John Lee Hooker in the more traditional elements of their transformative guitar anthems and they are a perfect fit for Lunar Festival, an event that also seeks to cross cultural borders and boldly enlighten experience.

‘Let’s Make It Happen’ sing Park Hotel and that is exactly what they proceed to do. Built around the duo of Tim Abbey and Rebecca Marcos-Rosa, the London-based band are an unexpected revelation, fusing prime-time Talking Heads and Chic in a quirky, off-kilter amalgam of post-punk stabbing guitars, furious funk and penetrable disco. They are just as esoteric as they are danceable.

And before those venerable punk veterans The Stranglers bring Lunar Festival 2018 to a triumphant close, there is the spectacular sight of the traditional procession with the marching brass band blasting out the incessant refrain of Arthur Brown’s ‘Fire’ as they lead a snaking conga line of flamboyant dancers, placard-waving revolutionaries dressed in white crime scene suits and a selection of strange furry animals around the main arena before the symbolic lighting of the Lunar fire.  It all makes for a grand finale to what has been a most wonderful weekend’s entertainment, one that was successfully achieved in spite of the vagaries of the weather.

Lunar Festival was held at Umberslade Farm Park, Tanworth-in-Arden, England between the 27th and 29th July 2018.

More photos from Lunar Festival 2018 can be found HERE