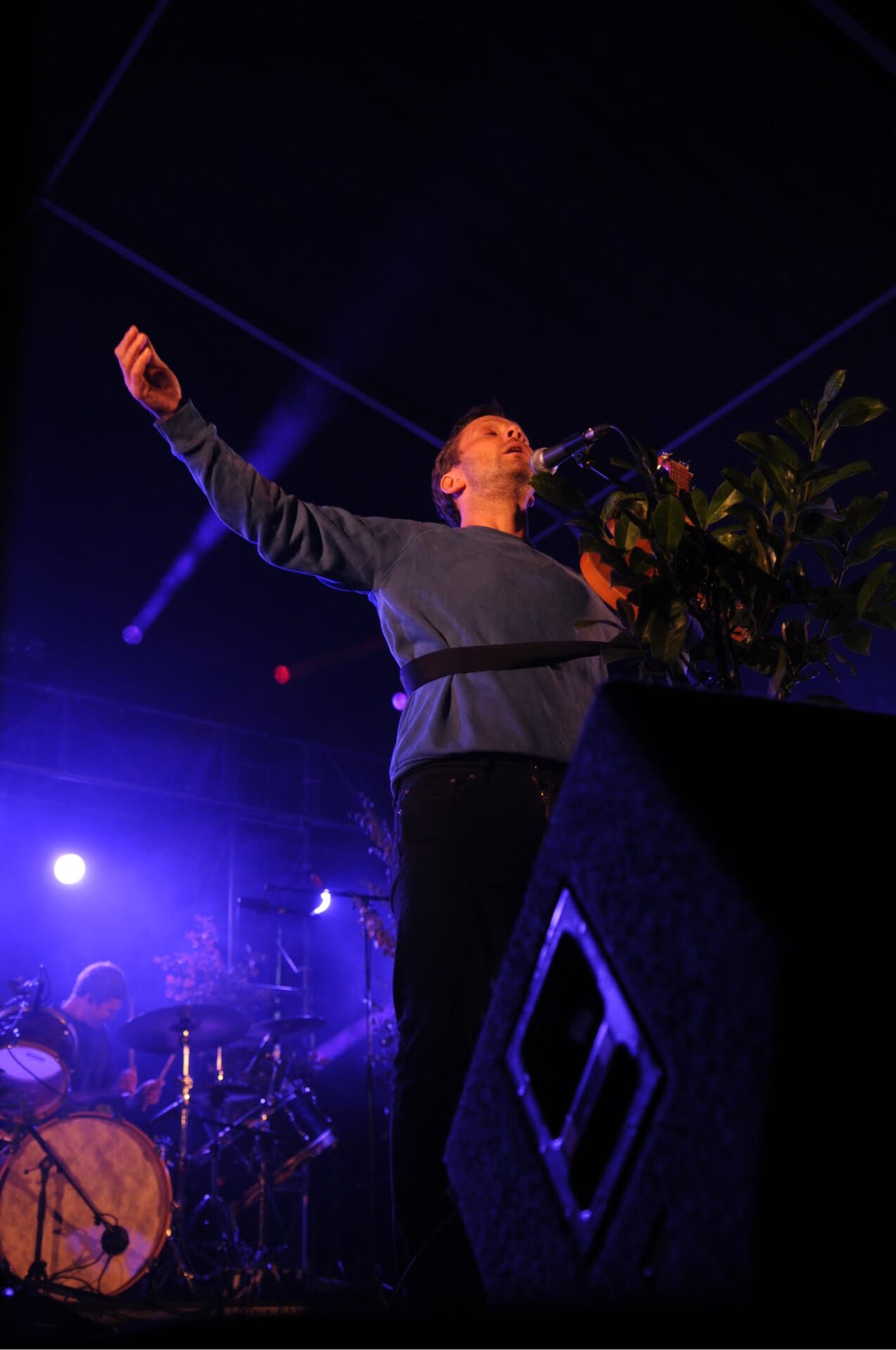 An idyllic patch of the Derbyshire countryside has become the spiritual home for indiepop, with Indietracks festival becoming the Mecca for fans of jangly, twee guitar pop the world over.

A reassuring combination of heritage trains, friendly community, a village fete feel and exceptional line-ups has made this festival one of Britain’s best-kept festival secrets. For those in the know, there no other like it. 2018’s edition saw the organisers challenge the indiepop stereotypes, broadening the parameters of that genre to concoct their strongest line-up to date with a run of bands that reads like a who’s who of must-see indie bands.

God Is In The TV sent two reporters to peer through the train steam to see what musical wonders Indietracks had to reveal this year.

Bolstered by an additional bassist, duo Rachel Aggs and Eilidh Rodgers have added extra power and texture to their smile-inducing, funk-laden indie. Few bands have a penchant for simple yet danceable rhythms as Sacred Paws, who have more in common with ESG as they do any indie-pop band. On the last, completely dry, day before the rains descend their tight and energetic live performance is the perfect start to the weekend. (James Thornhill)

You might only get to see a ‘blood moon’ once in a hundred years. And as Lovely Eggs frontwoman Holly Ross points out while introducing ‘Fuck It’, their pragmatic anthem to disappointment – it’s “fucking cloudy”. What a strange beast this band are. Their punchy, quickfire early songs – all belligerent whimsy and caustic philosophy – go down a treat, but when they attempt a ten-minute garage-psych wig-out, much of the crowd reach for their drinks. Sometimes shorter sets are the best, but from the freshly-bought Eggs t-shirts we see all weekend, it seems love overlooks such trifles. (Gordon Anderson)

Packing out the Indoor Stage, it’s easy to see why London lot Happy Accidents are pulling a crowd. A vibrant blend of power punk riffs, twee and knowing humour, their set is relentlessly upbeat and boundless in its enthusiasm. With catchy pop songs that drill into the emotional heart of youth, the three-piece is everything you want from live pop punk. (JT)

The most delightful discovery of the weekend has to be Tugboat Captain, who start their Church Stage set with an almost infuriating level of politeness. “This song is about a conversation with my mother,” being the most twee pop intro we’ve ever heard, they turn out to be the perfect uptempo Indietracks band; a smidge of Smittens (whose set, incidentally, we miss), a hint of Allo Darlin‘ and with ‘The Distance’, a truly great singalong moment in their locker. Odd charm. Polite euphoria. A bassoon solo. Curiously wonderful. (GA) 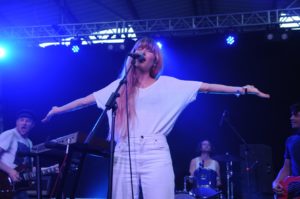 Night Flowers’ evolution has lead to this point and the creation of something special. Here are a band currently playing inch-perfect dream-pop with all the potential to be massive. ‘Cruel Wind’ is an effortless, emotional pop song perfect for film soundtracks and chart-crossover. As guitarist Greg Ullyart thrashes like he is playing completely different music, and singer Sophia Pettit’s lush vocals and seductive stage presence combine, this juxtaposition creates a dynamic performance. Night Flowers are destined to be headliners of this festival and many others. (JT)

Darren Hayman is performing the Hefner album Breaking God’s Heart in full. Just him and a guitar, singing lots of songs about a man in his twenties who wants a girlfriend, while nostalgic thirtysomething couples sway happily in the rain to ‘Love Will Destroy Us In the End’. Hayman admits frankly that the album is “hugely front-loaded”, and as this starts to be proved correct, we drift away to somewhere a little less wet. Hayman, who stays around all weekend, nevertheless remains the festival’s spirit animal and general bespectacled hero. (GA)

They might not have top billing but it’s hard to disagree that Dream Wife own the first full day of the festival with their rousing feminist, power-pop statements. Live, their polished tracks lose the veneer and become moments of blasted punk rock. Singer Rakel Mjöll owns every inch of the stage, her Icelandic diction of English words adding an enthralling uniqueness to proceedings. But it’s not just the songs that rock, this is a band with something to say. Poised at the edge of the stage stating “I am not my body, I’m Somebody” during ‘Somebody’ it is apparent how important this band is. (JT) 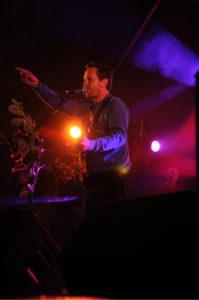 Saturday headliners British Sea Power take to a foliage-enhanced stage half an hour late due to technical problems but soon find their wings. An intense, propulsive version of ‘Pelican’ heats things up as Yan’s thousand-yard stare appears, guitars are swung high and a stuffed owl is booted enthusiastically into the crowd. As per BSP tradition, two marauding bears roam the crowd, hugging and high-fiving as the terrace-chant refrain of “Easy! Easy!” greets old favourite ‘No Lucifer’. They finish with the soaring, elegiac ‘The Great Skua’, the crowd roaring home a wordless hymn to a barrel-chested seabird like an anthem to a country long since dissolved, or perhaps yet to exist. Under the very last glimmers of a fading azure sky, it’s truly a little bit special. (GA)

The second ‘dream’ band of the weekend, self-proclaimed ‘feminist punk witches’ Dream Nails are turning smashing the patriarchy into a punk party. Shambolic punk with just a hint of soul, they are a band that don’t take themselves too seriously but are 100% serious about their message. ‘DIY’ is the mantra we all need, and the perfect Indietracks anthem, while ‘Deep Heat’ with the hilarious refrain “Nobody cares if your dick is on fire” is the greatest swipe at Donald Trump yet. Pure feminist punk fun. What more could anybody want? (JT)

The Sunday rain stops perfectly for Haiku Salut, whose restorative properties to the damp and hungover crowd are equally remarkable. The three-piece remain an entirely unique proposition, swapping between synths, accordion, brass, percussion and more in a wordless, gorgeous mixture of electronica, folk and something indefinably theirs alone. There is kindness and strength here; something intelligent and complex, yet humane and deeply felt. Hearts not parts. (GA)

On the indoor stage, Gwenno’s superb Cornish language psych-pop LP Le Kov sounds full of life and wonder, with a tour-sharpened band also filling out tracks from debut Y Dydd Olaf with subtle guitar textures and a pulsing backbone. ‘Eus Keus’ (‘Is there cheese?’) offers the most idiosyncratic crowd singalong of the day, above which Gwenno stands poised, eyes wide, ready to go almost anywhere. (GA)

Gwenno’s Heavenly labelmate Anna Burch fares somewhat less well, the lightly country-tinged indie of LP Quit The Curse feeling static and overly polite, while the touring band, featuring two of Girl Ray, seem on a leash that stops the songs truly loosening up or building momentum. Neither intimate nor passionate enough to move either hearts or feet, it’s a missed opportunity. (GA)

Honeyblood close down the main stage with a typically energetic set, the two-piece joshing with each other and inviting a ten-year-old boy onstage to dance, which he does with moderate enthusiasm. Their slightly two-dimensional grunge-pop means not every song is a winner, but when it strikes it does so hard, with ‘Ready For The Magic’ and album title track ‘Babes Never Die’ rounding off the festival with plenty of dancing and energetic pogoing at the front. (GA)

Of course, to only speak of the live music on offer would downplay the spirit of Indietracks. It’s the dancing to the best indie DJ sets around, it’s the craft workshops, it’s the steam train rides, and most of all it’s the sense of community and overall supportive vibe of the crowd. 2018 retained everything that makes Indietracks so great while also pointing to a bright future as it stretches its musical remit further and further.