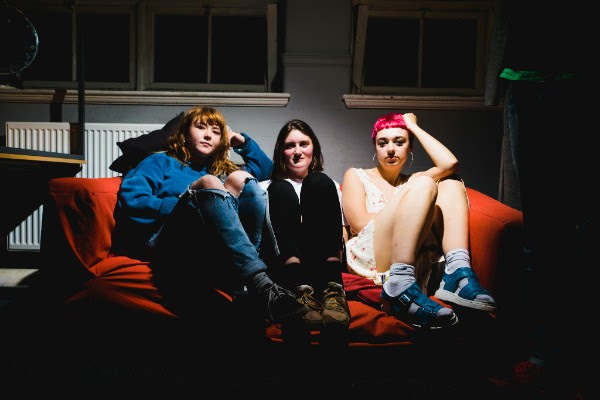 Welsh trio Adwaith are on the cusp of crossing over, one of the most constantly evolving and exciting emerging groups from Wales of the last few years. This trio of artistic young women craft brilliant bilingual songwriting that is constantly growing and shifting, crammed full of down to earth personality and a heart on their sleeve spirit that’s both challenging and beguiling. Catching up with them before their set at the launch of their of their new single ‘Garteref‘ at Clwb ifor Bach, they were modest, witty and lovely company, clearly tight-knit they are here with an open approach to our conversation they literally finish each other’s sentences at times and laughter punctuates our chat.

Hailing from Carmarthen their friendship goes back to their childhood; singer and songwriter Hollie Singer and bassist Gwenllian Anthony have been friends since they were three years old. “We met Heledd (Owen) at our first gig, when we didn’t have a drummer and the rest is history!” they say. Fostered by the fine West Wales imprint Libertino Records they have put out a series of excellent singles, alongside some great shows up and down the country over the past few years, their swift ascent has been assured. In the past twelve months, they have been in session for Huw Stephens at Maida Vale; performed at Festival No. 6,  The Future is Female festival, started their own FEMME nights as a safe place for other female musicians as diverse as Ani Glass, Chroma, Serol Serol, Gwenno and the legendary Patricia Morgan from Datblygu and starred at Focus Wales.

Their new single ‘Gartref’ distils an atmosphere with chiming guitars and clipped percussion. It is woven with Hollie’s haunting vocals and captures the yearning of homesickness and going away and returning; it’s the kind of superlative songwriting shifts we’ve come to expect from them. “We wrote it in the car on the way back from Italy” says bassist and keyboardist Gwenllian “We were feeling really overwhelmed and emotional, it’s about home, and going back home from there, because I really didn’t want to, really.’ Singer Hollie adds “the song is about a longing and not having a home, and not having a safe space.’

Adwaith’s sound is constantly refreshing, evolving and infinitely beguiling. Their wide palette of sounds is both empowering and universal, taking Welsh language songwriting into uncharted territories. The band say that their influences “are very varied, and change all the time. We take inspiration from bands such as Fleet Foxes, The Slits.…”. In their tour van they are currently listening to an eclectic playlist of ‘Gorillaz, Goat Girl, Big Thief and Kamasi Washington.’

Adwaith possesses a songwriting maturity and self-awareness that belies their relatively short lifespan as a group. From their debut single ‘Pwysau’ at the tail end of 2016 to the bright infectious folk-pop of its follow-up ‘Haul’; from the simmering post-punk grooves of ‘Lipstick Coch’ and the feminist indie-pop anthem ‘Femme’, Adwaith have released a run of intoxicating singles that are as diverse thematically as they are musically. I was struck by the difference in their sound from witnessing them on stages at festivals like Wales Goes Pop, Future is Female, and Focus Wales, from atmospheric acoustic numbers, to fizzing guitar pop to filthy post-punk basslines, where some bands perfect one sound and stay there, there doesn’t seem to be any limit to Adwaith’s adventurous musical ambition. ‘We take a lot of inspiration from different kinds of music and different styles of music, if you put yourself in a box then you can get stuck there,’ points out Gwenllian. “So we try to make all of our songs quite different and explore different things,’ with Hollie adding “We have a free attitude to writing music and what we do, and we don’t like to put ourselves in a box.’

Plugged in and socially conscious their previous single ‘Femme‘ mocks sexism to a great tune and witty lyrics, while the fuzzy buzz of ‘Newid’ which means ‘change’ in English is an explicitly political song “Its an angry song about Tories and Donald Trump’ explains Hollie, before telling us about her reaction to Trump’s UK visit. “We were just watching it on TV, and we were like what is this? I don’t understand how he is the President really! Even before he even became President it was proved he sexually assaulted women, he shouldn’t even be allowed!”

The widescreen sonics and moving refrains of their previous single ‘Fel i Fod’, dealt with the uncertainty and fear of life at the threshold of a new beginning and has been streamed over 100,000 times on Spotify and selected as a soundtrack for a recent trailer for the Welsh FA’s Women’s team.

They reveal their forthcoming debut album will be called ‘Melyn‘, which means ‘Yellow’ in Welsh and will see the light of day this October, recorded in Giant wafer studios in Powys and in Music Box in Cardiff, it’s produced by Steff Pringle and given the material they’ve released so far it’s bound to be a wonderful long player. “There are songs on the album that we’ve been working on since we started the band, we used old songs that maybe we didn’t like anymore too and completely changed them’ explains Gwenllian. Hollie adding ‘all of our songs are very personal, quite nostalgic, that’s the theme of the album’ before Gwenllian continues “It’s about growing up, it’s like a documentary on us since we started in this band because we used all the songs since we started the band three years ago, on this album.”

“When we wrote the album we went there without a full album and we wrote some of the songs in the studio.” She continues “It was in a secluded place in the middle of nowhere and we could just create there; when we jam we don’t really have a way of recording things, just on our phone. But when you are recording you can mess around and be really creative and be really free.”

But why is the album called Melyn?  “We were thinking of an album name for ages’  Hollie explains “Helledd came up with it she just said one day what about Melyn? And we were like yeah it’s a nice word.”
“It was going to be a sentence but we couldn’t think of one” offers Heledd. “We got there in the end!” laughs Hollie.

Gruff Wyn Owen head of West Wales’s Libertino records took the band under his wing from the second time he saw the young group, spotting and nurturing their talent more or less straight away. “He came to one of our first gigs and we can’t believe how lucky we are and he’s helped us with everything it has just been insane since then’ Hollie remembers. “The second time I saw them, it was actually a song they don’t play anymore. It was like ‘Oh my god I’ve just heard The Slits and the Velvet Underground!’ and they’re three girls from here!” Recalls Gruff enthusiastically “It was just the quality of the songs, and its natural with them, I think the problem would come if they started to over think it. That’s the problem with bands usually they have to learn their craft, but it just flows out of them.”

With an SWN festival appearance booked alongside Gwenno with a support tour to follow, an appearance at Green Man festival next weekend and a debut album forthcoming that we can’t wait to hear, Adwaith are carving themselves a place in our hearts as one of the brightest rising stars in the constellation of Wales’s music scene.