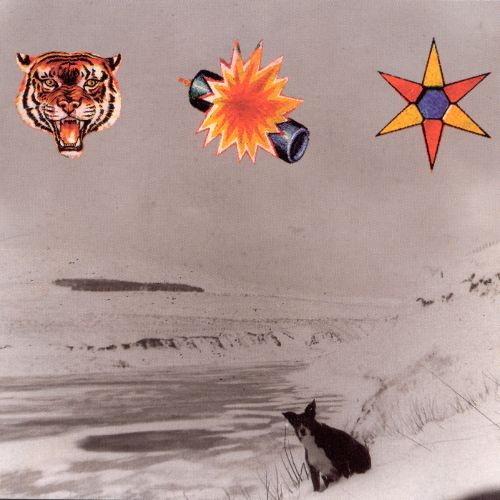 Welcome to the wonderful world of The Beta Band. If this is your first stay, I should explain that this is a strange and enchanting place, where every fairytale you have ever heard comes to life in glorious Fuzzycolor, Technicolor’s bigger brother, even more colourful, but with soft edges and where each sound can be heard crying from rooftops you weren’t even aware of. Alright, I shall return to this world for a moment, The Beta Band were a group formed around 3 close friends originating from Edinburgh. Vocalist Steve Mason, drummer Robin Jones and DJ/Sampler John McClean, who were to produce music that really wasn’t like that of anyone else, but whose influence has gone on to inspire many of today’s artists, so will today, deceptively I’m sure, sound nothing out of the ordinary. Describing this band might be somewhat like someone first watching an episode of Patrick McGoohan’s The Prisoner back in 1967. This band were niche, where only a few select ears would even dare to fully appreciate what it was these guys were producing. Their ‘cross’, if you may, is a band that truly were ahead of their time.

The Three EP’s, as its title would suggest, is a compilation of the band’s first 3, 4-track releases, from 1997 through ’98, remastered & reissued on the occasion of its 20th anniversary. ‘Dry The Rain‘ was the first track to be taken from the first of these, Champion Versions EP in July of ’97. A fascinating song, which when you read the lyric is far deeper than the gentle rhythm would suggest. Its dark undercurrent begging the listener to explore – or failing that become lost in – its beats/breaks and cutting guitar riff, that like a bandsaw serve to cut the pieces for the frame of a truly remarkable song. But as this number finishes, the listener can rest assured that a further 3 tunes await, just as solid as the first. ‘I Know‘ serves to rest the eager listener’s mind, its easy loop and gentle vocal proclaiming “I know, I can’t find you”. But enough of that as the minor chord breaks the uneasy wait, on ‘B+A‘, in a vocal free, beat-heavy tune that would wake even the soundest sleeper, just in time for their easy folktronica or psyche-folk to slip from this band’s squeeze-box & harmonica, in the form of ‘Dogs Got A Bone‘, 8 notes that will sit firmly in the listeners mind, as this song plays out.

And so to 1998, and March saw the release of The Patty Patty Sound EP, in what is yet another sure-fire Beta Beta Band hit. ‘Inner Meet Me‘ uses techniques first worked on, on the band’s debut EP, only this time beefed-up and sent into space, as the bleeps, bops and squiggles play alongside an eager guitar riff. A pitch change takes place as this number draws to a close, tempo increasing and ‘The House Song‘ makes our acquaintance. Not quite the banging club number that the title might suggest, but still ‘banging’ in the club that The Beta Band might frequent – in my mind this is somewhere deep inside Alice’s Wonderland, The Hatter in the DJ booth, playing to pressure from The Mock Turtle & Gryphon’s murderous demands. ‘Monolith‘ is up next and as the title might suggest, a solid slab of sound, beats and funereal chords are offered up. More breaks and beats as the listener becomes lost, in 15 minutes of chill-out. It is clear that Jones took the upper hand in the studio the day this was recorded; beers were certainly on him that night! ‘She’s The One‘ brings this originally 2 disc EP to a close, in a very monumental Beta Band number. Lyrics that are so tightly packed they ensure nothing is lost, and it’s most certainly not.

Los Amigos del Beta Bandidos is the EP that rounds off this set of early releases. 4 tracks that first met the ears of listeners in July of 1998 and the sombre ‘Push It Out‘, a song that bears 4 lines, that in contrast to their earlier numbers, is stripped down, both vocally and musically, and is strangely the longest of the 4 numbers here. ‘It’s Over‘ might almost be considered a swan song, had it not been that their career was only just beginning, and so we move on to ‘Dr. Baker‘, which soon pronounces itself as more than Beta Brilliance with an air that early solo Stuart Copeland might pronounce itself from Rumble Fish on. From just the short number of notes on offer here and the downcast setting, this really set their stall out. To close this release ‘Needles In My Eyes‘, from what I can only assume is another darker corner of Steve Mason’s early musical mind, as the chorus proclaims that “Needles in my eyes won’t cripple me tonight, alright. Twisting up my mind please pull me through the light, alright”. Dark? Sad? Or even hopeful, as from here the band were to release a further 3 albums and whilst never achieving quite the adulation they truly deserved, they were both loved and critically acclaimed by both fellow artiste and public alike. Surely there is no better epitaph.

The Three EP’s is re-issued on September 14th through Because Music.