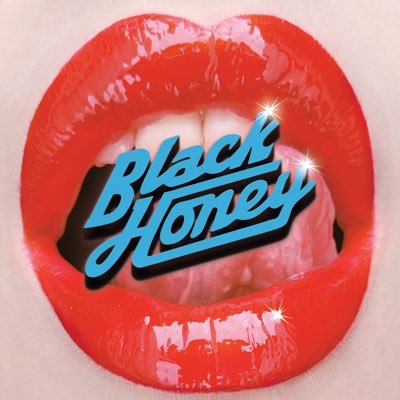 “In a bad world, for dreamers. Night-time. Lolita.” Brighton-based songwriter, vocalist and guitarist Izzy B. Phillips can’t cope with living in the real world. So at every opportunity she sticks on her headphones and observes the minute details in her everyday life from an escapist cinematic perspective, such as staring out at a rain drenched window of a bus with theatrical sentimentality. Phillips is the lead dreamer of indie rock band Black Honey (joined by Chris Ostler on guitar, Tommy Taylor on bass and Tom Dewhurst on drums) and their stylistic music videos have given them well-earned blog buzz and an idiosyncratic personality.

Obviously inspired by the cinema of Quentin Tarantino, the Shaun James Grant-directed promos feature many guns, motels, cowboy Western environments and revenge plots. All very American, all very dramatic. However, the question is can Black Honey really translate this captivating filmic experience onto their long-awaited debut self-titled record and can it be enjoyed just as much without the assistance of the colourful visuals?

There isn’t a full blown Sergio Leone string orchestra on the record but the Americana blues vibrato that can be heard in the majority of Black Honey‘s tracks keeps the British band’s music redolent of American Western films and give the tracks a common thread as their rock music goes through various genre fusions. On an album format the decision to diversify the rock genre always keep things interesting and not stale.

On the radio-friendly ‘Bad Friends’ the Americana is mixed with church bells and the sticky hit-hats of trap music and on the Royal Blood co-written ‘Into The Nightmare’ it’s blended majestically with the marching stomps of Muse‘s ‘Psycho’, the chord progression of Blondie‘s ‘Call Me’, the harmonies of glam rock and the mystique of Lana Del Rey.

Furthermore, the Tarantino setting is given a disco vibe in the music video and track content on the memorable ‘Midnight’. Vocalist Izzy B. Phillips’s tone on this track and many others can sometimes be megaphonic and sometimes fuzzy in its filtered effect and this as well as their journeys into dance-punk make them comparable to Yeah Yeah Yeahs.

Their Americana is in its most purest form on the motivational ‘Dig’, the revengeful ‘I Only Hurt The Ones I Love’, the mid-paced ‘Baby’ and the Dandy Warhols-flavoured ‘Hello Today’, while final track ‘Wasting Time’ (stomping emotional voice-holding ballad) and ‘Blue Romance’ (fluttery Lorde-type pop production) sound more like they’d soundtrack a young adult dystopian adventure series such as The Hunger Games than a Mexican standoff.

Black Honey’s lyrics also display their mindset. Lyrics such as “Front row seats to a car crash. What I’d do to get you back” (‘Into The Nightmare’), “Golden bullet through my brain. Midnight diving, dinner cracks. When you see velvet I see black” (‘Dig’) and “Give me Elvis singing/Stick and poke James Dean” (‘Blue Romance’) imagine cinema.

While the protagonist is played out as a tough, self-confident and revengeful character. Shown by words such as: “Cross your heart and hope to die. I’ll break you just like you broke mine.” ‘(I Only Hurt The Ones I Love’) “I want your midnight honey. I’ll take it for free. Only for me.” (‘Midnight’) and “Hello today, cause I got heaven in my veins. Tomorrow’s new, God and Buddha love me too.” (‘Hello Today’). Izzy B. Phillips has noted in interviews she uses music to develop a persona that she can’t be in real life.

With Wolf Alice picking up the Mercury Prize award this week, could Black Honey be the next British indie rock sensation to be recognised on a large scale? It’s hard to tell yet. Their music is too imitative of other familiar acts but if they can bring a more original vision to their style they could have the potential for big accolades.