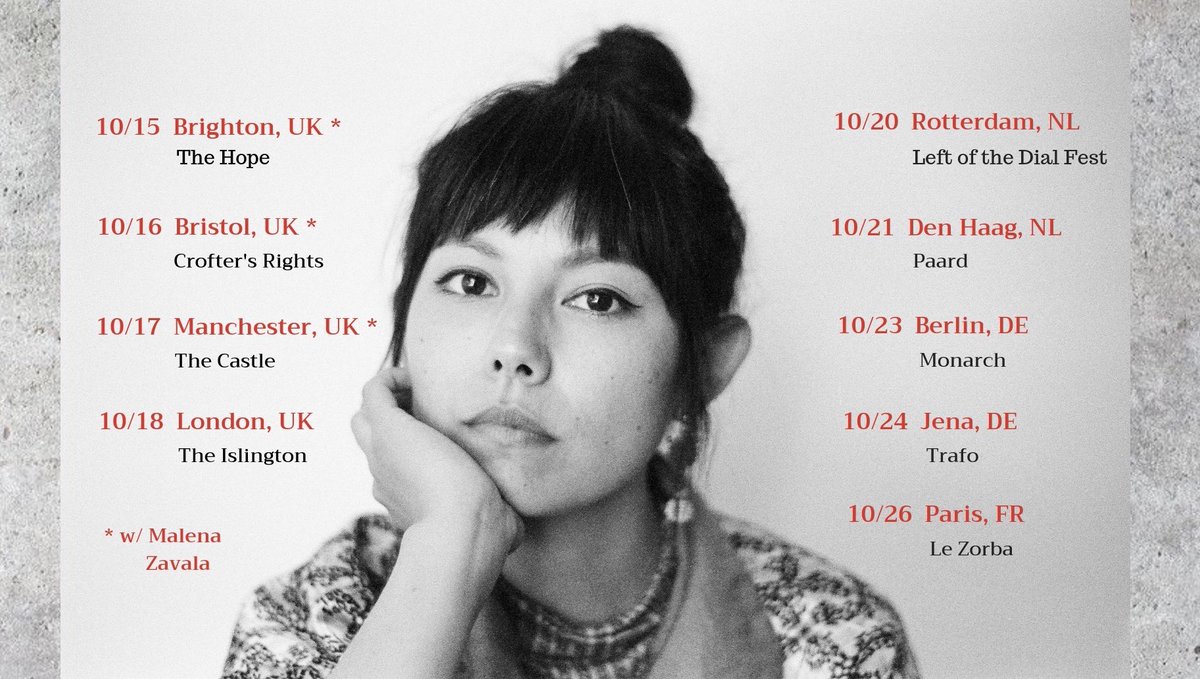 With a name like Dre Babinski, she could be a Bond girl. “Ah, Doctor Babinski, how nice to see you again. And with your friend, Meester Bond. Jaws…keel them.” It has an air of mystery about it.

So quite why she chose the artist name Steady Holiday confuses me. And that’s true of some of her songs.

Even before going to see her on a rare visit to Europe mainly to promote her second album, Nobody’s Watching, I was in awe of a woman who has played with The Elected, which includes Blake Sennett and Jason Boesel from Rilo Kiley. Sennett is amongst the leading guitarists in the business in my view, while Rilo Kiley epitomised the best California has offered the musical world. But then she’s part of the trendy, Bohemian, Silver Lake scene in Los Angeles, that city’s answer to New York’s Williamsburg, and which has produced or allowed to flourish many of the U.S.’s top indie and alternative artists.

Physically, she is petite, demure, with an understated yet enigmatic aura about her. While her speaking voice is firm and confident the singing one is so feather light and mellow that it rarely rises above a whisper. Many of her songs are almost lullabies. But within that murmur she conveys the full range of emotions admirably.

‘Steady Holiday’ suggests, like Cliff’s 1960’s Summer Holiday, I suppose, a film soundtrack and many of her – mainly sad – songs convey the sensation of emanating from a movie or a play. She has worked in TV and film roles and I discovered her as a suggestion for ‘Tracks of the Week’ a couple of months ago. In that song/video, the somewhat confusing ‘Mothers’ which ended tonight’s set and in which she attempts to differentiate between “compassion and the slippery slope of altruism”, her latent acting abilities are evident. On the night she showed she doesn’t need a formal stage or TV set act out her creations and live on stage her voice has that eerie quality of being able to convey simultaneously both gentleness and threat. She doesn’t need to raise it. As my schoolmasters used to advise me, “Gently, Bentley.”

It is rather difficult to compare her accurately with other artists. Portishead often crops up, and in the opening song ‘Who’s Gonna Stop Us?’ particularly she might have been one-time fellow Silver Lake-r Jenny Lewis while her own influences include Burt Bacharach – you can hear that in the melodies – and Leonard Cohen. Which prompted me to think that she would probably deliver a wonderful ‘Suzanne’ or ‘Hallelujah’; probably the only difference would be in the vocal range.

We were offered a cover on the night, though it was of Paul McCartney/Wings’ ‘Arrow Through Me’; a version quite unlike the original.

What I wasn’t aware of prior to this show was her prowess on the violin. While she knows her way around a guitar fret board I suspect the violin may even have been her first instrument. It made its first appearance in ‘Flying Colors’ and sporadically thereafter, including in the penultimate song, ‘Terror’, one with a complex arrangement and which winds like a soap opera. The performance was as good as this terrific video suggests.

While Steady Holiday could probably deliver these songs solo she brought along one of her band, Derek (Howa) and his fascinating set of miniature Yamaha keyboards and drum machines, out of which he conjures up virtually an orchestral sound. His contribution also prompts me to highlight her great sense of humour. She looks like she’s enjoying herself on stage (so many don’t) and introduced Derek with a tongue-in-cheek “this is how I found him”, possibly referring to his Skid Row-like appearance.

Later when I spoke briefly with her she was amused that I’d guessed her locale in Los Angeles. (“I suppose I’m sort of typecast”, she sighed).

But that’s the Bond girl. Unassuming, intelligent, funny musically and lyrically proficient with a natural stage presence; and with a great set of songs compiled over the last three years or so since she arrived as a complete unknown that deserves far greater exposure. On that subject it was sad that a small audience of only 20 or so witnessed her show, quite a contrast to her performances on home ground at Coachella for example. I really hope it doesn’t stop her coming back here again.

Steady Holiday’s UK tour has now concluded and she has moved on to mainland Europe before returning to the U.S. for an extensive tour through November.