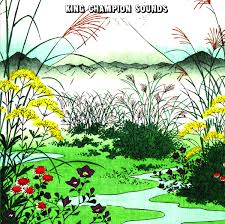 Well, this is great. If your happy place is Beta Band meets Swans then by the time you reach ‘This, Mate’, standout track on an album of standouts, you will already know you are listening to one of the best records of 2018. It’s underpinned with industrial drones, a tense Jello Biafra-style spoken word anti-drama about being educated and poor, and haunting off-kilter xylophone and bells juxtaposed with a Blondie-ish melodic chorus that comes out of nowhere at the four-minute mark, before being lost again to a pack of dogs barking down the lane, only recurring later as an indecipherable incantation as the track takes a full two minutes to fade out. Glorious stuff.

Even from the opening alarm bell on ‘Clouds of Money’ the band’s fourth album For A Lark (taken from a poem by Ivor Cutler) is an often merry romp through the finer detail of a myriad of styles from psychedelic krautrock, dub, free jazz, free folk, and electronica. A supergroup of sorts, the Anglo/Dutch band features main songwriter Ajay Saggar (The Common Cold, Deutsche Ashram), lyrics and vocals by GW Sok (ex-The Ex) along with Teesside multi-instrumentalist Oli Heffernan (Ivan The Tolerable, Ack! Ack! Ack! Records) and an all-star band of brass and rhythm. There are also some high-profile guests featured but, of any record released this year, For A Lark speaks for itself through its incredible compositions. Clearly built on an encyclopaedic knowledge of music and a huge compendium of audio references, to the layman it might be slightly ill-positioned between Morricone and Sun Ra, to the cut-and-paste aficionado no post-punk stone has been left unturned, no obscure jazz rock left unmoved in its quest to be genuinely unclassifiable. Like the Merry Pranksters this is a record that goes ‘furthur’.

From the aforementioned opener to ‘The Wordsaword’ (flute, upbeat, Beck at his most ‘Two Turntables…’) and first real jazz/funk barnstormer ‘Om Bhur Bhuvah Svah’ (Ananda Shankar meets League of Gentleman. Free jazz instrumental vaguely of the ilk of the most out-there Blue Note releases) it only took me three songs to be completely enthralled by For A Lark’s brazen experimenting and arguable brilliance.

Like The Go! Team without all the annoyances and gimmicks they bring or Bongwater without the overbearing seriousness, the backing vocals over the wah-wah and flute on vice-squad soundtrack ‘What Amanda Meant’ point to an avant French pop influence that perhaps adds a welcome mooring on occasion throughout this record, as all around is a melee of seemingly spontaneous design (the South American pop of ‘Low Hanging Fruit’). So, we have slow-pitched darkly psychedelic interludes one minute (‘Memory Is Imagined’) before electronic punk with the full brass section the next (‘Big Red Button’).

If there can be one criticism it is that the instrumental segments sometimes have more impact away from the often rhyming nonsense of the lyrics (see “big red button / big dead mutton” or “who is this turd / it’s quite absurd”) so the comedown-like outro of ‘Mirror The Soul’ is a welcome respite from the unrelenting mash-ups of content and like a clever plot twist at the end of a movie that would seemingly have no obvious ending. The airy drone of feedback and radio squiggle is like sunset or fireflies and the complete antithesis of that mind-boggling opener ‘Clouds of Money’ that now seems so long ago. Terrific record.

For A Lark is released on 9th November through Excelsior Records.