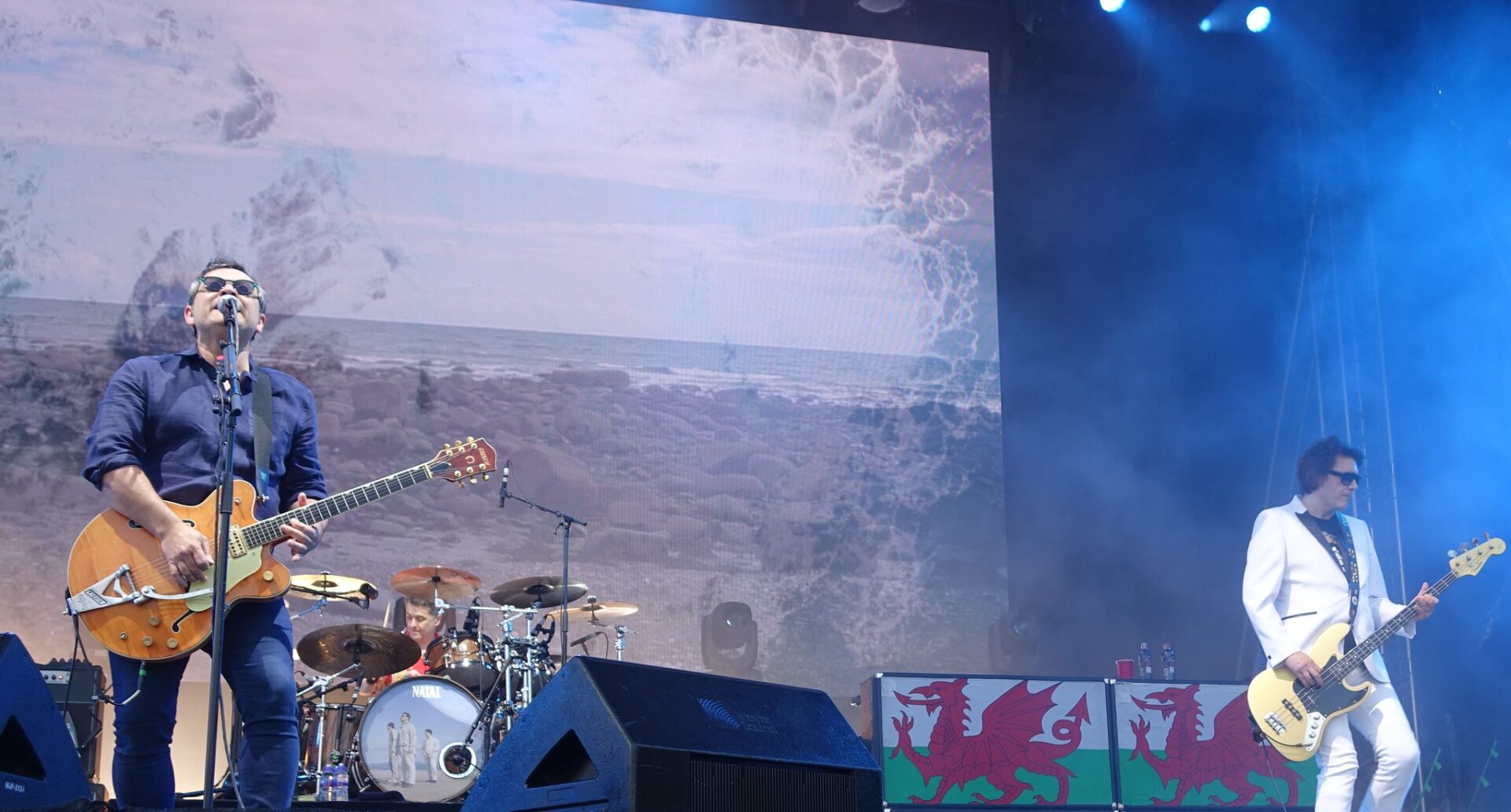 “I was miserable twenty years ago, now I’m fifty, I’m even more miserable!” sneers Manic Street Preachers‘ Nicky Wire a third of the way through a slightly rejigged setlist of their ‘This is my Truth, Tell Me Yours’, album at a sweltering Cardiff Castle, to celebrate its twentieth anniversary.

Hearing tracks like the sombre ‘I’m not working‘, the brittle ‘Born a Girl’ or the doomy ‘SYMM’, one ponders on just how much of a ‘existential breakdown’ Wire was having at the time?

Still, I have affection for the album. Marking perhaps the height of my fandom, on the original tour I saw them in Cardiff at the CIA and Manchester Arena. They I capped it all with an unforgettable evening witnessing them at the Manic millennium on the New Year’s Eve of 1999.

Following in the wake of the disappearance of much missed founding member Richey Edwards in 1995 and their commercial peak of 1996’s Everything Must Go, arriving in 1998 This is my Truth.. was an album that reflected Wire’s wistful melancholia, a shrugged sense of defeat steeped in the Welsh heartlands and the love/hate conflict at the heart of our identity.

Perhaps overly long and a bit MOR for some tastes, yet lush and at times beautiful, it reflected the pre-millenial after the party feel of many post Britpop records of that year, it spoke to me in the way that the admittedly magnificent yet nihilistic Holy Bible didn’t. 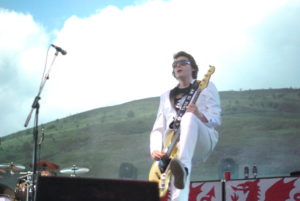 For the album playback, in an attempt to translate it live, the Manics have tampered with the tracklist. Plus ‘Nobody Loved You’ has been inexplicably banished, replaced by baggy b-side ‘Prologue to History’. The Manics always did have a slightly strange view of their own material.

Which makes it initially disorienting as they launch into ‘Ready for Drowning’ earlier than expected. Bradfield dubs it ‘just as relevant today as it was then’ and it’s still an elegiac tour de force draped in tumbling drum rolls and magisterial organs. Inspired by the work of poet R.S. Thomas the lesser known of the Thomas poets, the keyline “consign it to its future / deny its history” that shivers down shooting guitars, makes reference to the destruction village of Treweryn; flooded in the 1960s in order to create a man-made reservoir to supply water to the English city of Liverpool, this acts as a rippling metaphor for the suppression of Welsh cultural identity.

While the Nirvana Unplugged -esque introspective scratch of ‘My Little Empire’ also makes an appearance higher in the list. Inspired by the silent twins, ‘Tsnumani’ is still a barnstorming and infectious moment, with its punctuated ‘inbetween/ inbetween/ inbetween’ pre-chorus is still an electric thrill. While the wonderful ‘You’re Tender and You’re Tired’ stomps and lilts, the combination of stately pianos ‘memory has become pain’ sings James in a graceful tone that urges you to cling on for dear life. 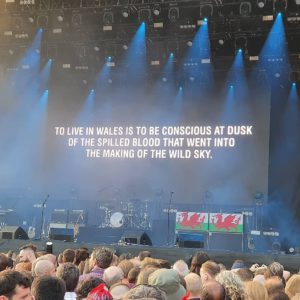 Closing the album set, with the positively funerial ‘SYMM‘, a worthy song about the Hillsborough tragedy and those responsible, whilst it tries everything in its power not to mention the actual subject at hand, it has always been a curious and clunky beast.

There’s a juxtaposition with This Is My Truth as it was one of their most successful albums, featuring some huge hit singles, and yet at its heart, it was very dark. Whilst the Manics do their best to translate it live, perhaps the best way to truly experience it is on record.

Possibly the most unlikely named number one this country has ever seen ‘If you Tolerate this your children will be next’ is greeted with streamers and singalongs as the crowd are thrust back to a time when Welsh volunteers helped fight the fascists during The Spanish civil war. Elsewhere tonight is a largely back to basics set from the Manics on home turf. In the bosom of thousands of fellow Welshmen and women, half of whom appear to be here for the bar or a selfie. In 1993 the Manics were greeted by peltings of bottles of beer in Swansea, it’s an extortionate five pounds a pint here, so its fair to say none of it will be being chucked at the band tonight. 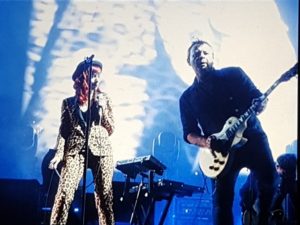 Even as a fan, I freely admit The Manics back catalogue is patchy; they’ve produced moments of gold alongside some fodder. But they’ve always reflected where they are at.

Tonight they deliver a cracking second set that takes us through a potted history of some of their more rockin’ moments. There used to be a in-joke between band and fans about ‘Sleepflower’, the fans would always bay for the awesome cult opener from their Gold Against the Soul album, and the band would refuse to play it. So when they kick off their second set with it tonight, it’s an electric thrill.

For ‘Little Baby Nothing’ they are joined by The Anchoress, and all these years later it still sounds splendid, counter weighting its sloganeering lyrics about the exploitation of women with a jaunty tune. There’s the obligatory outing for ‘Motorcycle Emptiness‘, which is still in my top three of Manics songs.

‘International Blue’ sends shockwave through our hearts, a brightly burning emotive anthem fuelled by soaring drive time guitars, the sun is gone now and the clouds have brought cooler air.

The pure fun of their cover of Guns and Roses ‘Sweet Child ‘O Mine’ ushers in a humongous sing along, James Dean Bradfield’s voice sounds fantastic tonight, which hasn’t always been the case in recent years, still when you get to fifty your voice changes. Here he shows he can still reach the upper registers with ease though, boomerangs around the castle walls, lifting aloft the stinging arpeggios of the hollered ‘where do we go now?!” outro. 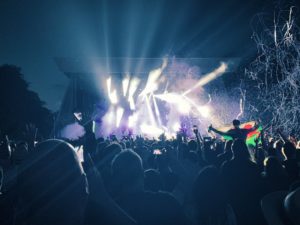 Then a trio to finish. First, a nostalgic version of ‘No Surface All Feeling’ replete with its drum rolls and stately arpeggios has me singing along to every word, tapping into my emotional connection with the band. Then a fiery ‘You Love Us’ that focusses on how band and fans feed off a mutual love for each other with the original video as a backdrop, and finally the traditional anthemic closer ‘A Design for Life’ before we are engulfed in streamers.

As tonight’s thousands are sent home singing along to every word, some of them may have only wanted to get drunk, but the rest of us are in this for life.

All images the property of Richard Rose.