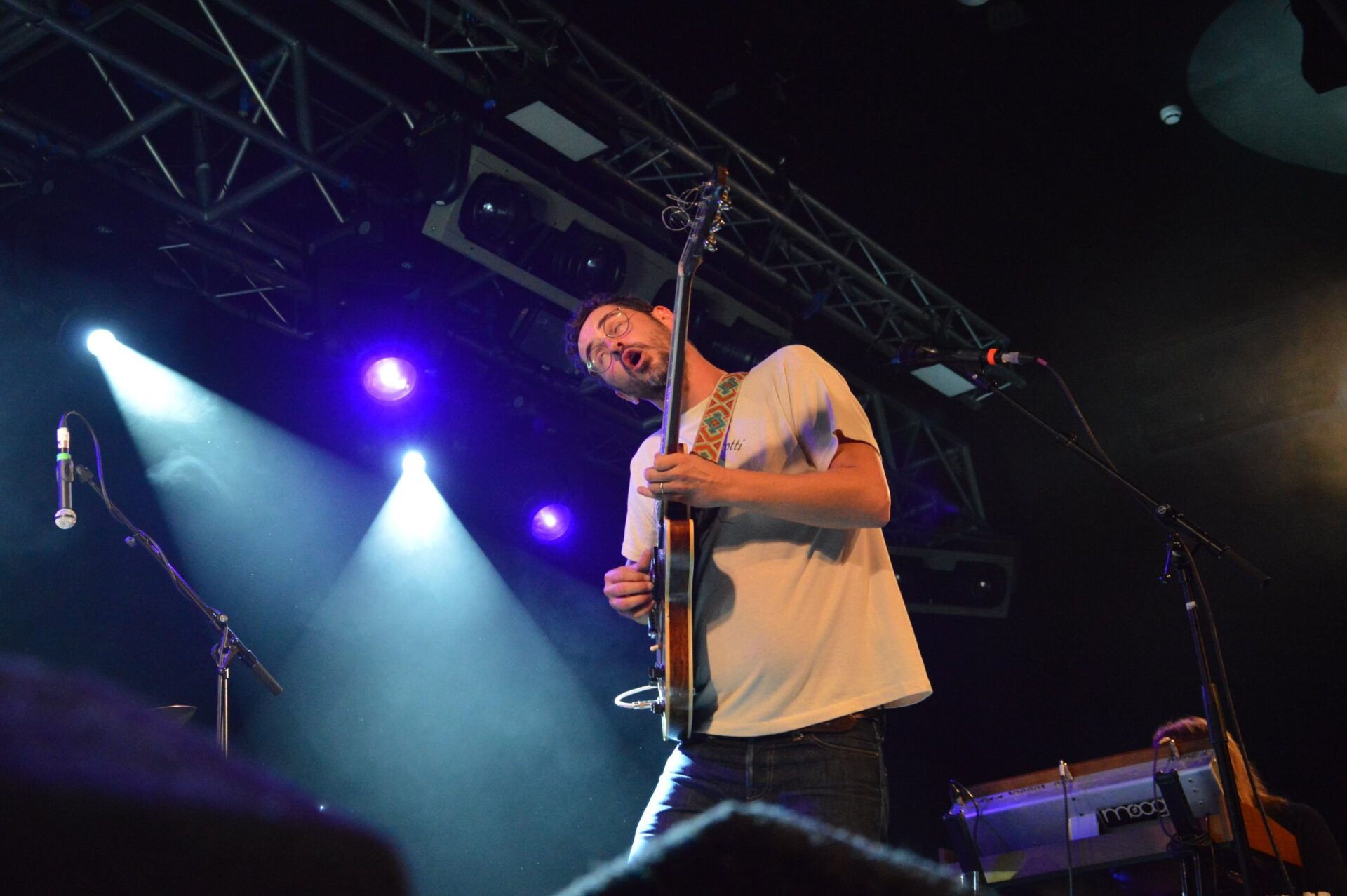 Picture a completed jigsaw puzzle laid out before you. It depicts a landscape of music. A river of rock and roll meanders its course between lush forests of funk and soul, while tiny hamlets of Dylanesque folk stylings welcome the weary traveller en route to the distant cities of post-punk and prog-jazz. Far away, snow-capped peaks of disco and dub reggae mark the horizon, beneath a technicolour, psychedelic sunset. Now imagine that four guys from Austin, Texas come along and sweep the whole thing onto the floor and then put it back together by jamming unrelated pieces together and jumping up and down on the bits as fast as they can.

Fanciful stuff, you might say, but that’s assuming you’ve never seen White Denim in full spate. Oh my goodness, what a batshit mad accretion of detail and incident – dissonant, mathy chord changes, weird time signatures, fret-melting solos and fast-talking vocals. One song runs into another making it next to impossible to keep up. It’s not until about an hour in that they pause long enough for a rapturous and well-deserved round of applause.

It’s White Denim’s first-ever gig in Cardiff and between them and their support, the hotly tipped locals Boy Azooga, the Tramshed is packed tonight. The queue to get in had been snaking down to the Taff Embankment and by the time Boy Azooga strike up their first number the place is bursting at the seams. They spend the first half of their set looking a bit surprised at the sheer morass of humanity who’ve turned up early to check them out, which is quite charming and endearing but doesn’t make for a very exciting show and it’s not until they hit ‘Face Behind Her Cigarette’ that they flip up a gear and start looking and sounding like the kind of band everyone came to see. They need to start hitting the stage with that kind of energy, because from that point on they’re quite formidable.

White Denim aren’t nearly so coy. Songs like ‘Hallelujah Strike Gold’ bristle with a kind of frustrated hyperactivity, and more than once, for instance on the rolling funk of ‘Double Death’, they sound like Battles’ long-lost and unexpectedly louche collaboration with Stevie Wonder. The rather sublime ‘NY Money’ runs that funk headfirst into Jaki Liebezeit and Mick Fleetwood wrestling nude in front of a fireplace. As a fairly recent convert I confess I still find it hard to pick out one song from another – in fact it would be less remarkable to learn that they’re just making it all up as they go along, because, well, surely no one can actually hold all that stuff in their brain at once, and even if they could it would be impossible to deliver it all at such a breathlessly Loony Tunes pace. Yet here we all are, awash with the stuff.

‘Magazin’ mooches past all sleazy, as guitarist and singer James Petrelli, a blur of teeth and glasses, knocks out a solo of such cold, predatory deliberation you half expect to see it remerge from halfway back through the audience with a fish in its mouth. Later in the set the rollicking, proggy instrumental ‘Reverse Mirror’, with its further shades of Fleetwood Mac, segues into the looser, trippier ‘Say What You Want’, and things start to feel a bit song-y for a moment or two before we’re off somewhere else again.

It’s an exhausting ride. The sense of attack never lets up, and the levels of fret-wankery can even, at times, be forbidding. But it’s intellectual and primal in equal measure, the kind of music Frank Zappa might have made if he’d actually liked rock and roll. More than Peaches en Regalia though, the work of American art White Denim most remind me of is Moby Dick, and not just because it’s Melville’s 200th birthday. Both White Denim and the white whale are singularly enigmatic: instantly familiar and deliriously impenetrable – a convulsive, single action and an endless, compulsive digression – simultaneously the dead central still-point of their respective canons, and a relentless probing of those canons’ wildest, most infamous frontiers.

By the time they get to an encore, they get Davey, the boy from Boy Azooga, on-stage to join them for a clutch of songs starting with ‘Small Talk (Feeling Control)’. There’s a rather touching tale of how the two bands met at SXSW and instantly bonded over the existence of Super Furry Animals. ‘Everybody’s favourite furry is a Super Furry, right?’ asks Petralli as Davey gets his tuning right. There’s not an audience in town that wouldn’t get behind that sentiment.