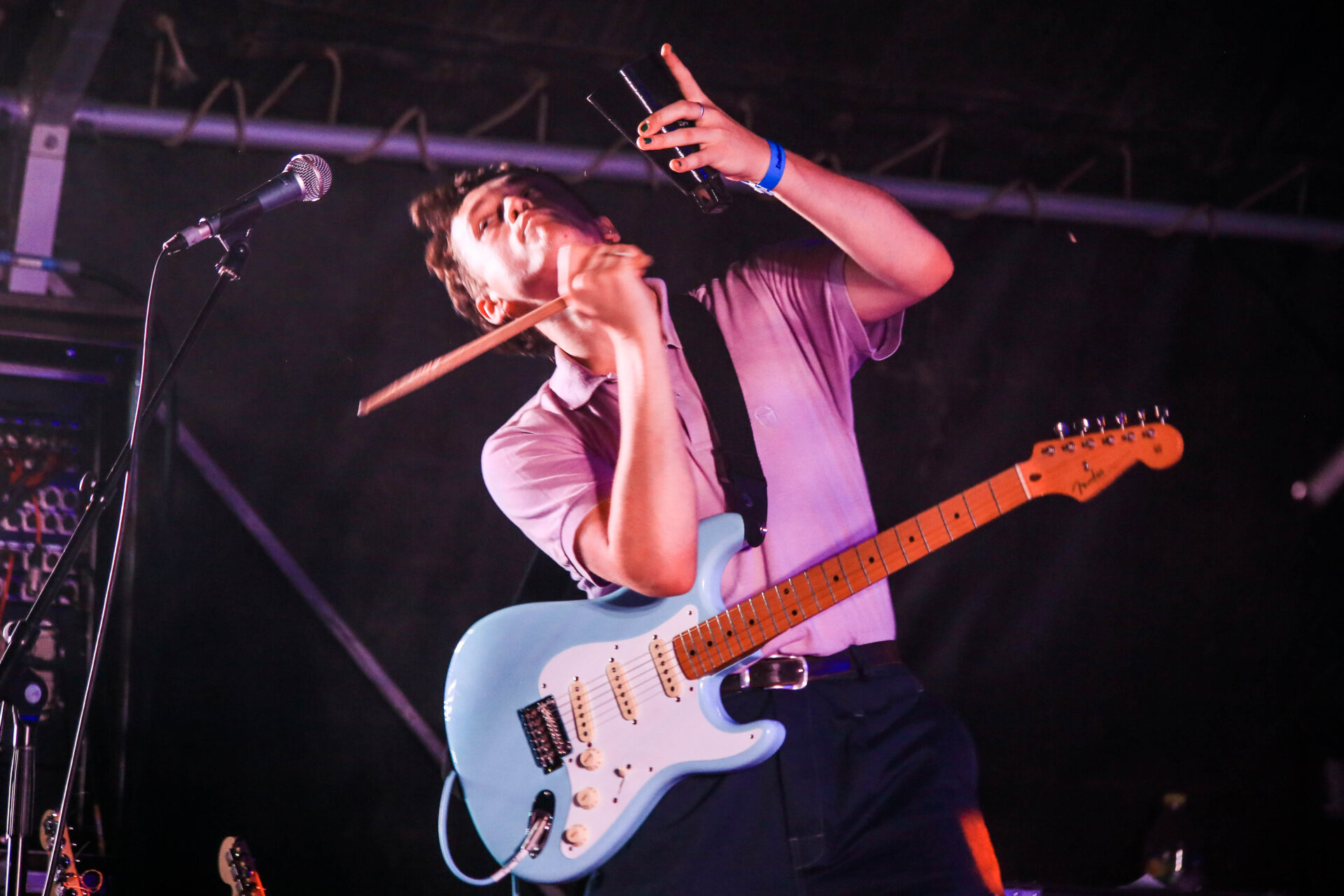 Indietracks is something special. In just over a decade the grounds of the quaint Midland Railway Museum, nestled on the rolling Derbyshire hills, have become a beacon to indie-pop fans. A welcome antidote to the world, one built on community and a shared love of music, it embodies what music festivals should be about. Passion not profit.

Run by volunteers, all the proceeds go to fund the upkeep of its home. It doesn’t revel in “big” acts to bring in the cash but focuses on the most interesting classic indie-pop acts and exposing the underground.

Where the festival’s first era has an exclusively C86, twee indie-pop vibe, recent years have seen the remit of “indie” and “pop” widen to embrace electronic-pop, punk and shoegaze all without losing any of the original charm.

2019’s line-up features several “un-Indietracks” acts, as the festival continues to reposition itself and make its appeal wider in scope and secure a future of solid line-ups.

As always, the three-act run of the festival’s opening Friday night is incredibly strong, always a highlight. Our vintage train ride into the site, leaves us missing the usually brilliant Peaness, leaving electro-indie-punk outsiders Bis to open proceedings.

Recently revitalised, the material from this year’s Slight Disconnects record sounds every bit as vital as the 90s bangers. Opener ‘Sound of My HeartBreak’ positions the set as a journey through a blinding career of never fitting in from slight-smash-hit ‘Kandy Pop’ (which of course goes down the best) and the kinetic floor filler ‘Eurodisco’.

Providing the perfect indie-disco-party for a Friday night with big riffs, disco beats and fun, sometimes verging on stupid lyrics, the Glaswegians, have won everyone over by the brilliant ‘Kill Yr Boyfriend’. They seem genuinely humbled by the response, but Bis is still here and still a band that divides opinion between those with taste and those who might just be dead inside.

While Bis represents the past, Halifax hype band, The Orielles, are the future. They seem perfect for Indietracks. As a young band, they have side-stepped Britpop as the go-to indie reference point opting instead for a mesh of the jangly pop sound of Orange Juice, early 80s punk funk, and C86. Live, they perform this with precision.

Henry Carlyle Wade is a natural performer, his Yorkshire swagger and wit shining through between songs. Tunes like ‘Sugar Tastes Like Salt’ stand up with the best that current indie has to offer, and this performance suggests that the young band have so much further to go yet. Let’s just hope it continues to include cowbell – lots of cowbell.

Saturday starts with Jetstream Pony suffering sound issues at the Indoor Stage, before Porridge Radio prove themselves to be one of the most interesting new bands in indie-pop.

The Brighton band channel a quirky, uneasy energy with their performance constantly teetering on the edge of collapse. Tight post-punk rhythms and jangle guitars add some element of loveliness to the crushing angst of their words. Amidst the band’s off-kilter vocal harmonies, singer Dana Margolin descents into yelps and quivers in her voice, seemingly overcome by pure emotion. ‘Give/Take’ is a perfect indie tune and it’s hard not to be drawn in as Margolin repeats, “I want, want, want, want. I need you.”

Mammoth Penguins are a bit of an Indietracks institution. Emma Kupa, whilst being a pillar of the indie-pop scene, is also one of the festival’s organisers. The usual three-piece has grown with a gang of musical mates and this beefed-up sound provides a brilliant set taking largely from this year’s There’s No Fight We Can’t Both Win album. There’s something reassuringly nostalgic in this indie sound, it’s pure Indietracks and pure joy.

Back on the mainstage, the best punk pop band in the country is spreading happiness far and wide. Few bands capture the human condition like Durham’s Martha, and when they do it with big punk riffs and boundless humour it becomes truly special. Their songs always capture those big feelings from small moments, like being struck with love/lust in a supermarket or endless summers.

Now on their fourth Indietracks set, they are clear heroes at Butterley, the number of t-shirts seen around the site is a testament to this, and they don’t disappoint. A real word of mouth, DIY success story it is songs like the sheer brilliance of ‘Ice Cream and Sunscreen’ that show exactly why.

Proclaiming “shit is fucked” as they introduce new track ‘The Void’ they show that in the happy melodies there is a deep understanding that makes their tracks speak for themselves – which they largely allow throughout the set.

Before closer ‘Gretna Green’, bassist Naomi Griffin unveils an inflatable duck dingy, announcing she needs to make it to the indoor stage sharpish to catch Fortuna Pop label mates The Spook School’s final ever Indietracks show. As the feedback from the tune peters out, Griffin floats above a sea of hands and off into the distance. Martha, again, are exceptional.

If anything is going to follow them, the last show at the festival from The Spook School stands a chance. Famed for their inclusive, party gigs, the Glasgow DIY darlings have stopped off here as the first show of their farewell tour.

Emerging in full mime make-up the quartet play into the energy of a crowd there to pay homage to one of the best recent bands on the scene. The sheer emotion of the situation made for a slightly rocky start, but they soon hit full stride and by the time they blast out ‘Binary’ they are unstoppable.

Towering drummer Niall McCamley cracks jokes as always, and the band make this an Indietracks occasion of note with a lyrically changed, and festival themed, cover of The Just Joans ‘What Do We Do Now?’ and then being joined on stage by Martha for a rousing blast of ‘Move to Durham and Never Leave’. The Spook School always had a heartfelt and emotional message of inclusion and love to their music and this is felt tenfold tonight. As balloons drop from the ceiling, an emotional farewell was said to one of the bands who gave outsiders a voice.

The persistent rain leaves noticeably diminished numbers on Sunday, giving the site a slightly surreal feel. Falmouth’s The BV’s echo this vibe with their take on 80s indie, when the genre was bathed in reverb and echoed vocals. They certainly wouldn’t have sounded out of place on Sarah records, or supporting the House of Love. On stage, the energy comes from the swathes of guitar noise and pop melodies fighting for space, while it never descends into being a mess. Lush stuff.

This waves-of-sound motif is continued as visiting Hong Kong shoegaze heroes Thud also lay waste to the Indoor Stage. As Indietracks embraces this noisier end of the indie-spectrum more and more it is bands like Thud that will win over the jangle-pop diehards who only want the twee.

The five-piece delivers an intricate cacophony of sound, where each element is slotted into another, and it is every bit as good as on record, but with additional bite. If Slowdive had been the cultural zeitgeist band in the UK rather than Oasis, Thud would have been the result. Each part of the set is delivered perfectly, and ‘Ado’ is one of the best moments of the whole festival.

In the Church, London’s Solution Hours is delivering ‘Kneading’ – a spoken word lament over a rolling Slint-like guitar line and simple beat. The two-piece revel in simplicity, built on drums and guitar ambience, permeated with sampled bird song between songs. The spaciousness of the music allows the words of love, anxiety and longing to fill the gaps and it is utterly mesmerising. ‘Tricotomy’ has an almost rock riff, but slowed down, like riot grrl on ketamine. Solution Hours provides a sermon you need to listen to, whether you’re watching them in a church or not.

It’s hard to think that the pinnacle set of the weekend hasn’t yet occurred, but that wouldn’t be banking on Stealing Sheep. The three-piece is next level in every way. Coming on stage with a bizarre choreographed ritual, they go on to deliver everything you could want from a live show.

Just their gold glitter capes and weird glasses, combined with between-song, pre-recorded interludes and dance moves would take the “show” to a level not often seen at Indietracks, but as musicians they deliver the goods as well. They all sing in perfect harmony, and riff off different styles throughout the set.

‘Jokin’ Me’ is one of 2019’s best pop tunes and sounds incredible, but Stealing Sheep don’t simply deliver their songs as is, they find a groove and lock into it for a continuous disco party. This show is part Devo-does-disco, part performance art and part pop party, and no one is left without a smile.

At one point during an extended jam they slot Indeep’s ‘Last Night A DJ Saved My Life’ into the mix, and to end leave their instruments behind to perform like a pop girl band, just mics and dance moves proving they have it in them to own mainstream pop, if they want.

If there is any justice in the world, we won’t see Stealing Sheep on a festival stage this size again, they should be every measure be a huge act, headlining the biggest stages any minute now.

And that was it, another Indietracks a festival that evolves each year whilst maintaining its charm, its community and its inclusivity. Despite the rain, 2019’s event was anything but a washout with a line-up that proves Indietracks to be one of the best events around.