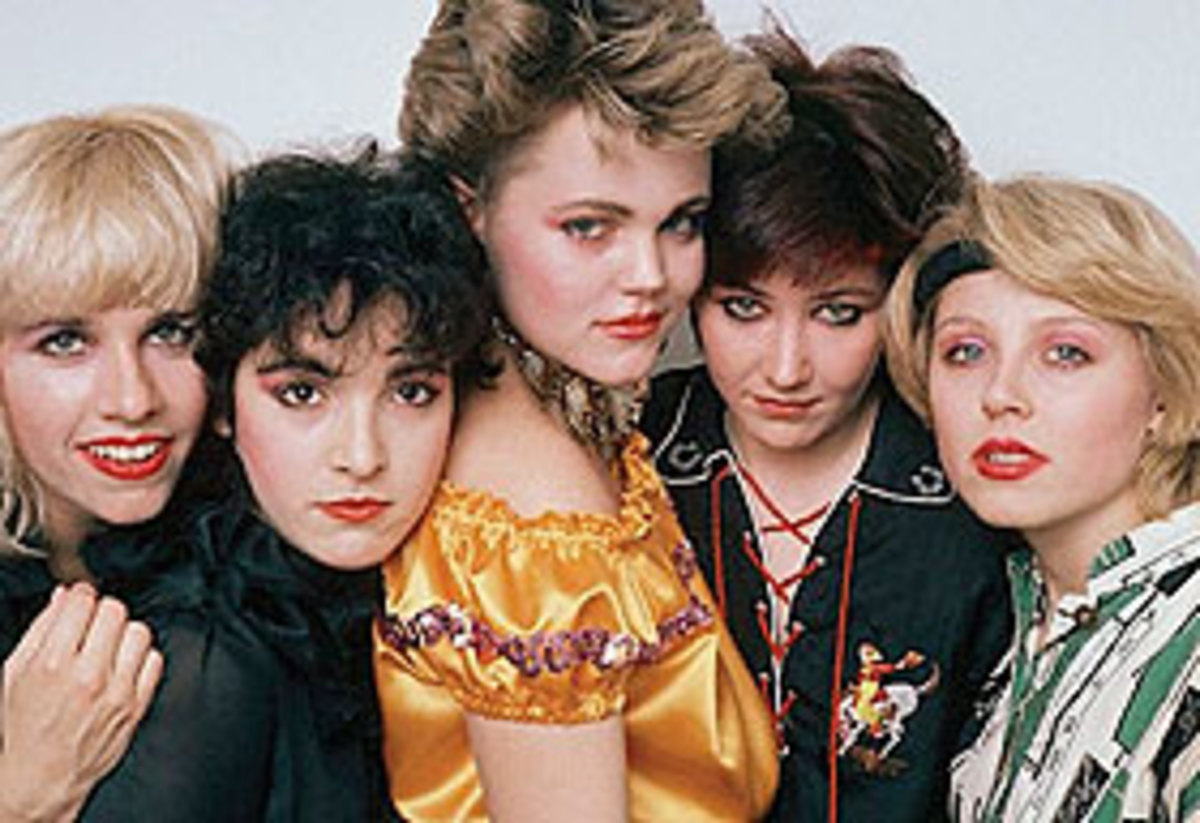 In case you blinked and missed them, The Go-Go’s (their apostrophe, not mine) are the sex-crazed, drug and booze-addled punks who turned into fresh-faced mom-and-apple-pie girls from next door and in a career that lasted just half a decade in the late 1970s and early 1980s made history as the first all-female band that wrote their own songs and played their own instruments (though not very well at first) to top the US Billboard album charts.  Moreover, that album, ‘Beauty and the Beat’, went triple platinum and is one of the most successful debut albums ever.

The Go-Go’s formed out of a chance meeting between a Hollywood run-away, Belinda Carlisle, and a wholesome German/Swiss-Lebanese-American girl originally from Milwaukee, Jane Wiedlin, (or Jane Drano as she then styled herself) who had moved to Los Angeles aged six when her surgeon father took a job there.

Both were living in the San Fernando Valley (the home of the ‘Valley Girl’), partying in Hollywood and were punk fans (especially of Iggy Pop) when they met. They formed the band on a whim in May 1978 “to meet boys.” Joined by Margot Olavarria, another punk who was ultimately fired from the band for sticking to her angst-fuelled roots when the others embraced pop, they set out to be stars without knowing how to play a note. They sold themselves purely on attitude. Their first review said “The Go-Go’s are to music what botulism is to tuna.” Subsequently they recruited guitarist Charlotte Caffey, who at least understood a little about playing an instrument.

Living in a ramshackle apartment just off Hollywood Boulevard that they named ‘Disgraceland’ they turned it into a bordello, endlessly collecting ‘booty’ when they weren’t being booed off stage. They were going nowhere until they recruited a very driven drummer, Gina Schock, to replace the original one, Elissa Bello. A professional percussionist, Schock got them rehearsing five times a week instead of a couple of times a month. They also added a manager, their friend Ginger Canzoneri. The final line-up change came in 1980 when Kathy Valentine – who had a perfect name for the bordello – replaced Olavarria on bass, bringing along too some genuine accomplishment at song writing.

By then they had gone through their rite of passage, supporting Madness for three months in Britain, being bottled and spat at every night by members of largely skinhead audiences who universally hated them.  But that trip also bought them their first stroke of luck. They made a single, released through UK label Stiff Records, called ‘We Got the Beat’; more of a pop than punk song and it was popular on the L.A dance scene.

They still couldn’t get a record deal but then they had their second break when they were spotted by executives from a fledgling record company, IRS Records (meaning International Record Syndicate, but also wordplay on Internal Revenue Service, the US equivalent of HMRC). They were attracted by the girls’ energy, their drive to succeed and the huge pop hooks they were now writing into their songs. But the quid-pro-quo was that they had to become cute and bubbly – not difficult for most of them – and which is what they did while they recorded ‘Beauty and the Beat’ on a shoestring.

Even so, it was Wiedlin’s brief L.A. affair with Terry Hall of The Specials, which was their third and seminal stroke of luck. They kept in touch for a short while after he returned to England and in one letter Hall sent Wiedlin some lyrics that were prompted by their relationship and which she turned into a song. That song was ‘Our Lips are Sealed.’

Hall has co-writer credits on it and his next band, Funboy Three, recorded their own version of ‘Our Lips are Sealed’. It is the one familiar to most Britons and Europeans while being far less so in the U.S. where The Go-Go’s version prevails.

It wasn’t long before The Go-Go’s were supporting The Police on an arena tour. IRS Records was headed up by Miles Copeland, brother of The Police’s drummer Stewart Copeland. Shortly after that ‘Beauty and the Beat’ became #1 album in the U.S., for six weeks, subsequently gaining a Grammy nomination. From out of nowhere they became the most recognised band in America; the essence of girl power while the Spice Girls were still at infant school and the country’s sweethearts to boot.

But that is when their luck ran out. The pressure of sudden fame and fortune broke them as it has with so many others. They drifted back into debauched behaviour and in one infamous post-show video they were filmed cavorting with a groupie and a roadie in an Atlanta hotel. There was no You Tube then of course but it spread through the press and TV like wildfire anyway. Parents across the country quickly concluded that The Go-Go’s were not going to be their daughters’ role models.

Meanwhile, Caffey lapsed back into heroin abuse, unnoticed by other band members. She described herself as being “in the grip of the Devil.” At the same time Carlisle developed her own three hundred dollar a day drug habit while all the band members adopted their own circle of friends. They rushed back into the studio to record their second album, called ‘Vacation’, when it would have been better to have taken one. Then Manager Canzoneri, tired of being ignored, walked out on them. ‘Vacation’ didn’t sell very well either.

Their second tour was characterised, as Wiedlin said, by their falling out of love with their fans, who reciprocated accordingly. They were only concerned with getting offstage as quickly as possible to get drunk, stoned and laid, in no particular order. Carlisle and Wiedlin fell out over who should take the lead voice on a song Wiedlin, who had become the main songwriter, had written. Then there was an unholy row over the distribution of royalties.

Wiedlin was the first to quit. It least it had the effect of pushing Caffey and Carlisle into rehab and both came out clean. But the band was fatally damaged and the members went their separate ways.

Carlisle became even more mainstream, and has had a string of hit albums ever since, starting with ‘Heaven on Earth’. She is still performing. She has sold as many albums as a solo artist as The Go-Go’s did.

The impossibly cute Wiedlin (green dress in the car in the video, white top on stage), a sort of American Kylie, was a teenage crush for more boys than there are dollars in the U.S. deficit. Post Go-Go’s she made four albums, out of which the single ‘Rush Hour’ was a big seller from the second one, ‘Fur’, before trying her hand at acting, appearing inter alia in ‘Star Trek IV’ and ‘Bill and Ted’s Excellent Adventure’ in which she played Joan of Arc. Latterly she reinvented herself again as ‘Lady Robotika,’ the star of a comic book series and then (seriously) as The Reverend Sister Go-Go, who officiates at weddings on behalf of the Universal Life Church. She’s still marrying folk to this day.

The Go-Go’s have re-formed several times, mainly as a four-piece, and with a fairly settled and dried-out line up featuring the members from the height of their fame, and the last tour was a short U.S. one in 2018 by which time Kathy Valentine, who was forced out in 2013, had returned. At least as a touring member. Even in this occasional manifestation they are one of very few New Wave bands still left from that era.

In 2011 The Go-Go’s got their own star on the Hollywood Walk of Fame right outside what had been The Masque, the punk club which hosted their first ever gig.

The song itself is playful, joyful and very danceable and it includes, as always with the Go-Go’s, a terrific bass line. The video makes you yearn for the 80s, which must be as popular today musically as that decade has ever been. Note no tattoos and not a single cell phone in sight (of course there weren’t any then). Just five girls; out having a good time.

For petrol heads, the car is a Buick convertible.