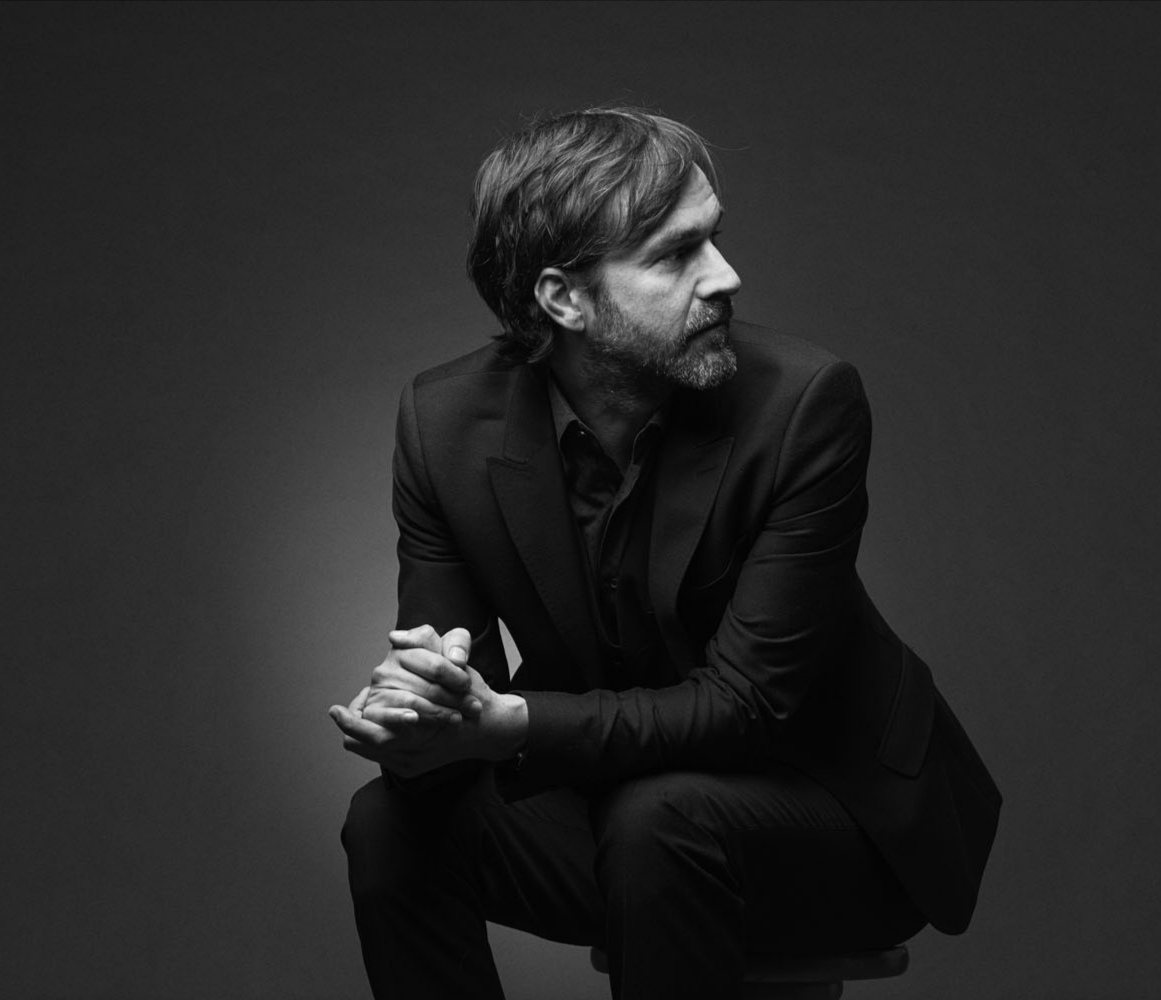 This Friday sees  The Bluetones frontman Mark Morriss release his 4th solo record “Look Up” and we at God Is In The TV have been given this exclusive track by track by Mark and stream of the LP from his label, Reckless, Yes, in advance of the albums release on 20th September.

Here Mark describes the writing and recording process of the record and the influences behind it.

“I had a very specific idea about this song, very early on before I had the lyrics I knew how I wanted this song to sound melodically. I had this chord progression which was very simple but which repeats in different styles.

“I knew I wanted this song to be the album opener – you write songs knowing where they’re going to be in the order. Lyrically it was written just after the Brexit vote and I was so surprised and shaken by the result. It made me question a lot of things – I just did not see it coming.

“The Brexit result made me question my place in the country that I call home, and how I’d always perceived this place that I live in – philosophically more than anything else – and how wide of the mark I seemingly was. A few of the songs are about that feeling of being culturally displaced; the shell-shock, the impact. It’s been three years now but these songs were written around the time of that impact, and things have changed – we’re still headed over a cliff but it’s not that immediate shock. It’s like a broken heart – you get used to a broken heart and that’s the danger.”

“This is a song which was added right at the end, everything else was recorded. I went in to the studio on a Sunday to record some backing vocals. I’d been away with Matt Berry’s band and I was exhausted and really hoarse, and I wasn’t really in the right energy to record the high falsetto stuff I’d been meaning to. I didn’t want to be at the studio and do nothing though, and I’d been messing around in soundcheck when out with Matt Berry’s band with this song Roll Away.

“I’d heard it on the radio one night driving back from a Bluetones’ rehearsal and it was sung by a Scottish singer, but is written by Anais Mitchell and Martin Green. He’d curated an album about migration and she’d contributed a song, I heard it and it really haunted me. I found it online and learnt it, was playing it in soundcheck as it’s such a lovely melody and such a nice feeling. I got a great deal of pleasure out of singing the song. So that Sunday afternoon I decided to record it, not to go on the album but maybe to use it for something.

All the Wrong People

“This was a song which I wrote where again the lyrics took a long time coming and with this it was the whole Trump thing. The song is about Donald Trump – it seems obvious to me but people have asked me, ‘who’s that about?’. The ‘big blonde hippopotamus’ gives it away, the clues are there.

“It was written as a song in three parts and I wanted it to feel as if it had three bridges and you’re not sure which is your favourite part. My idea was to write as many hooks as I could in a song – from the bass riff, the keyboard riff, right through everything. It’s the most deliberately catchy and hook-filled ode to Donald Trump which has ever been written.”

Holiday of a Lifetime

“This one was good fun. I wrote this sat round a bonfire about a mile away from Stonehenge while on a camping holiday with my kids. You weren’t allowed to play amplified music, but acoustic instruments were alright. So, I thought, ‘ok then, I’ll get the guitar out if I have to’.

“We were just sat around the campfire messing around and the chords just dropped into my hands. It was the last day of the holiday and a lovely evening, the hook came immediately and I coloured in later with the story of someone who probably isn’t all that comfortable with the place their life is at that moment and is hanging on to the idea of that one week holiday and getting away from the arseholes.

Poor Me, Poor Me

“This started life as a very simple little Blues song I was walking around the house playing on the guitar. The melody came really quickly – they did on all of them although the words took ages even though it’s all quite simple. You say it took months and months for a song to come and people go ‘what, but it sounds like a nursery rhyme!’ and you go ‘yeah, that’s the hard bit’.

“I wanted it to have a sort of sci-fi element to it which I think comes through the whole of the record, sort of Country with a Sci-fi twist. It starts off Country, then goes into sort of Sci-fi pop, and that twist threads through the record deliberately. Those are the sounds I like so why not stick them together. I’m not trying to be clever, I love those ‘70s Sci-fi soundtracks, and pop music of that time, and Country – Americana-Country-Blues.

“The lyrics are inspired by a quote from George Galloway when he was in Celebrity Big Brother. When he was talking to Pete Burns, and he was opening up and talking about some of his problems, and Galloway was like ‘poor me, poor me, pour me a drink’. And I thought that was a good line.

“I always do these little interludes, it’s another one of those soundtrack moments. They are musical ideas which I know aren’t going anywhere, aren’t going to and shouldn’t last longer than a minute but have their place. It’s an extension of the stuff I do for the David Walliams audio books.

“This is my favourite song on the record for no reason other than I like the tune. Again, the lyrics took fucking ages”.

“Once the lyric was done and it all came together it was great. I knew where I wanted it to be and knew I couldn’t do it all myself. I needed a couple of other cats to come and play, people like Mike Wilton who does the solo on there and the interesting electric guitar.

“It was me trying that Space Folk again, Rimini is really a folk song in structure and style but the garnish is all Sci-fi, a bit Heavy Metal Lite. I like to think the second half is my stab at War of the Worlds, that it could go on about side of five of War of the Worlds.”

All You Talk About

“This is another cover, a brilliant song by a songwriter called Paul Cook when he was in a band called Brinkman. I remember very distinctly the first time I heard this song, they opened their set with it at a gig at Metro – not there anymore, it was on Oxford Street – and I thought it was a cover version. I thought I knew it. Ads was standing next to me and I asked him why I knew it, what it was from and he was saying he didn’t know.

“After the gig I was asking them about it and they were saying it was a new one. That song is incredible, it was my favourite song of theirs straight away. I like a lot of their songs but that one especially got me. It stuck with me all these years – it was around 2003 when I heard it at that gig – I’ve always loved it but they never released it. I felt like I had a duty to this song whatever that might be.

“The music was written a long time ago. You have a picture in your head of what you want a song to be and you aim for it, and hope it doesn’t sound too much like it but sounds better. I was aiming for something that sounded like XTC and Elvis Costello, as if they were rehearsing in adjoining rooms with paper thin walls. In terms of the arrangement and the instrumentation and the sound of record, certainly that was the aim.

“Lyrically it is about being on the wrong end of an abusive relationship. Abusive relationships can be many things, not just physical abuse, although that can be a factor. It’s about how you can’t help fancying someone no matter how many times they are bad to you.”

“This is another Brexit song. These songs aren’t overtly political, they are more of a feeling, more philosophical about where it puts you in your country. Most people couldn’t give a fuck about the EU before and now there is this sense of displacement.

“I read ‘A Man Without A Country’ by Kurt Vonnegut talking about how at odds his philosophy was with the philosophy of the country around him. That’s my nearest reference point to make sense of what was happening to me at the time of the referendum. I read that book as a younger man but I could understand his viewpoint, sadly, when everything went down with the referendum.

“I felt displaced, like I don’t know anybody. It’s not mistrust, it’s disappointment that people had harboured feelings that they were so easily conned into acting on.