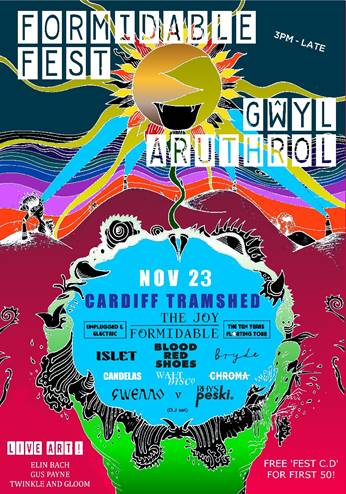 The Joy Formidable have announced the full line-up for Formidable Fest / Gŵyl Aruthrol at The Tramshed in Cardiff on Saturday 23rd November 2019.

The mini- festival has been organised by the band as a celebration of some of the best in Welsh music and art, while bringing some of their favourite artists into Wales.

Written and recorded in a bedroom over a decade ago by lead singer and guitarist Ritzy Bryan, and bass player and vocalist Rhydian Davies in North Wales, A Balloon Called Moaning was an instant hit. It was the first of the band’s releases to feature their ace single Whirring – a track that was named amongst Pitchfork’s Top 100 Tracks of The Year and described as “the song of the year” by Foo Fighters’ Dave Grohl.

Fresh from a US tour, the show will see The Joy Formidable back in Wales performing an unplugged and electric set showcasing hits from across their career on an eclectic bill that includes Islet, a psychedelic pop band from Mid Wales, Bryde, a singer-songwriter from Pembrokeshire, and Welsh language favourites Chroma and Candelas. Artists from outside of Wales performing are Blood Red Shoes, an alternative rock duo from Brighton, and Walt Disco, a five-piece new wave band from Glasgow.  Gwenno and Rhys Peski will be playing D.J. sets.

Lead singer and guitarist Ritzy Bryan said: “We see Formidable Fest as a lovely opportunity for us to invite some bands to play in Wales, in front of an audience that otherwise might not get to see them. That, and having a bill that promotes Welsh language acts and bands from Wales – just a really inclusive night of great music. We’ll be doing two shows that night, one short acoustic Welsh set and the other full electric.”

Formidable Fest will also have three Welsh artists create live art to be auctioned with the proceeds going to charities, one being the ‘North Wales Wildlife Trust’ who devote their time to protect wildlife and nature. These artists are Elinbach, Twinkle as well as Gloom and Gus Payne.