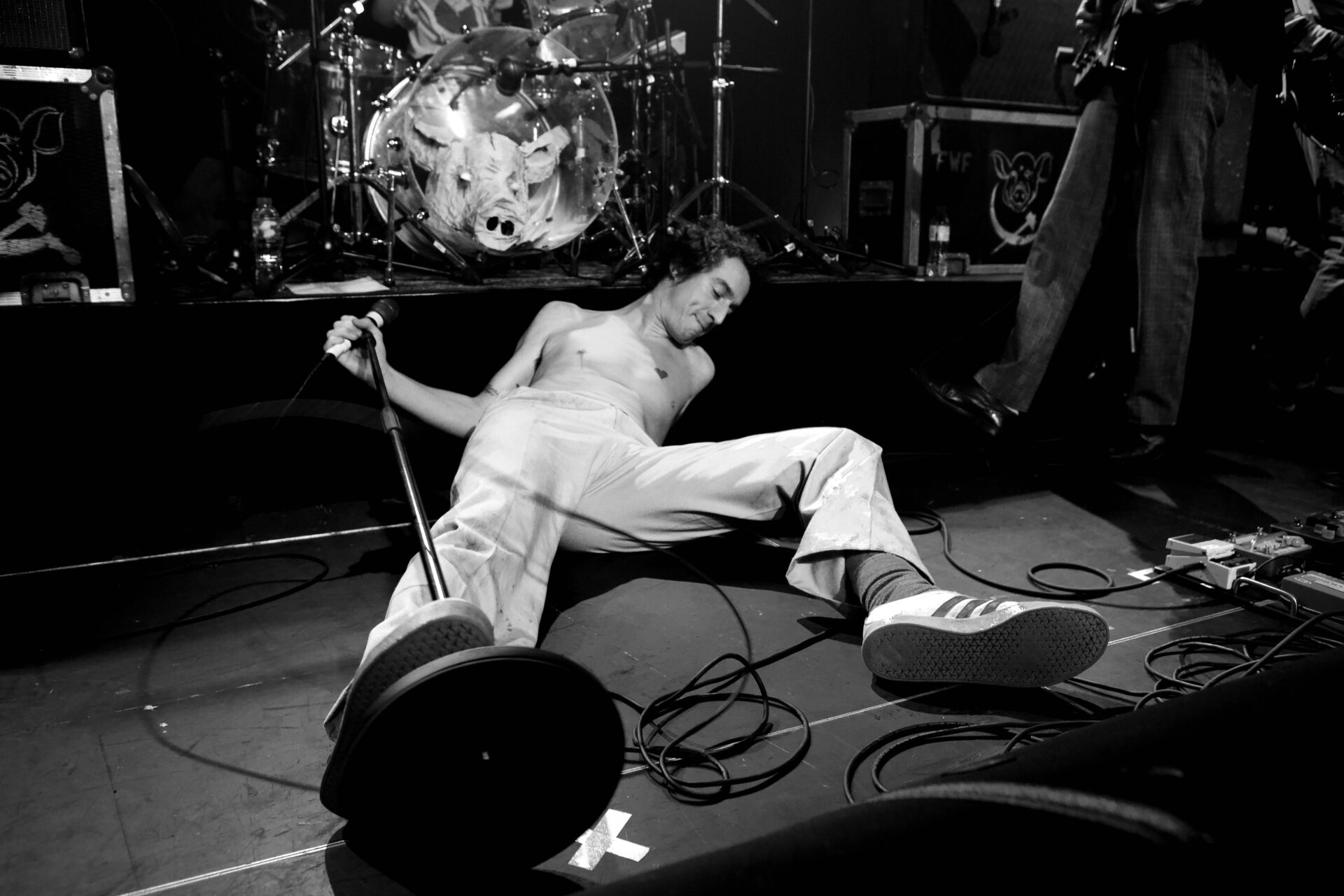 There is something very, very boring about Fat White Family. It’s not just the monotonous vocals, the lack of any obvious musicianship, the failure to do anything interesting with non-musicianship, their contrived efforts to try and look like they’re about to follow Paul McGann into a toilet in Camden, the mullets and moustaches, and the attention-seeking Nathan Barley-ish attempts to get some kind of reaction. There’s something more, something ineffably and transcendentally tedious about their company tonight.

Fat White Family are now three albums into their career, are clean and drug-free, have left London behind them for Sheffield, and their recent plaudit-winning LP, Serfs Up!, is a certain fixture on every other Best-of-2019 list. And fair play to them. Leaving London and its attendant cascade of recreational narcotics is a great idea. Did it myself years ago. But where Serfs Up! saw them expand their horizons and write a couple of songs that you couldn’t quite dismiss (see below), tonight’s set more often than not sounds like Mud. Lumpen, turgid glam-rock posturing which would make you queasy if it wasn’t so reassuringly dead and lifeless. Oasis without the tune.

A couple of songs in, lead singer Lias Saoudi is already in the front row of the audience with his shirt off, spraying beer over everyone, crowd surfing, and strutting about like a plucked and slightly resigned looking chicken. Compared with the Fat White Family of a few years ago they don’t look like they’re having so much fun, and the garage-psych of their earlier songs comes across as by-the-numbers. Attempts to appropriate disco and dub get swamped under a miasma of pounding guitars. I emphasise the word appropriate – they don’t ever sound like a band who understand or have any feeling for the genres of music they tackle. It’s more like box-ticking. I’d go as far as to say that it’s an example of the kind of colonial mindset that they supposedly critique.

And then there’s ‘Hits Hits Hits’.

‘Hits Hits Hits’ is a song about an abusive marriage sung from the POV of the abuser. More specifically it’s a song about Ike Turner, a kind of a parody of a tender ballad as he attempts to excuse or justify his behaviour. The predatory, misogynistic verses, sung by Lias, are punctuated by the sardonic chant, “Hits, hits, hits”. Very funny lads. See what you did there. Reading between the lines of the song it’s entirely possible that we’re meant to read this as preparation for a rape. It sounds a bit like ‘Oh! Sweet Nuthin’ by the Velvet Underground, coincidentally written by another man who was not above using his fists on women (or on anyone else he disagreed with).

When they get to the most rapey bit, the music goes down low, so you can really hear every word. It’s one of the few moments in the show when the lyrical content is clearly audible, and it goes like this: “Sister Tina don’t be shy / patience is starting to bruise / better spread / what have you got to prove.” Since this is a band who’ve complained before about bloggers taking them out of context, I’ve got me some context I’m going to park right here: according to the Office of National Statistics one in four women experiences domestic violence in their lifetime and two women every week are killed by their partners or ex-partners. They include friends of mine and I have to look them in the eye sometimes.

I think the Fat White Family need to have a good hard think about whether or not singing this song night after night is a very fulfilling way to go through life, and perhaps to grow the fuck up.

And so, on to the holocaust.

The rest of the band file offstage, and for a brief glorious moment, I think they might have actually split up in front of me, having finally tired of guitarist Saul Adamczewski once and for all. Sadly, however, he’s about to regale us with their other tender ballad, the sentimental, cyanide fuelled country and western weepy ‘Goodbye Goebbels’. As it goes I quite enjoyed ‘Goodbye Goebbels’ and would consider it one of the high points of tonight’s set. Some reservations though. At one point, the line “So here’s to the Fourth Reich”, is greeted with whoops and cheers from the guy next to me, and somewhere down the front, I see the unmistakable silhouette of a Nazi salute. It’s weird. Then I remember that no one but me cares about the lyrics and that cheering and putting your hands in the air are just things that happen at rock concerts. Disbelief breaks upon me like the light of an Aryan dawn – we’re not really doing Hitler-was-the-first-rock-star are we? I haven’t heard that one in years. It was a luke-warm take when Bowie made it. But for two or three minutes the point sticks. They could be up there unambiguously calling for genocide and this audience wouldn’t care. They can only see the form, not the content.

To be clear, I don’t have any evidence that they’re bad guys. From what I hear their left-wing credentials are impeccable. But what, as they say, the actual fuck? Is this a critique from a leftist perspective? Well maybe, but if you ask me, the form of fascism that they’re interested in was already successfully critiqued from a left-wing perspective at the battle of fucking Stalingrad. The right doesn’t wear paramilitary gear and boots any more. They wear Dickies and ill-fitting tartan suits and go on the BBC. Keep up, fellas. Stop sniggering up your own arses and look around you and you might be able to do some good.

Back to my original point then: this is boring. I’m not cross, I’m not offended, I’m not feeling any emotion at all. I wish I was. I’m reminded of the line from Nathan Barley: ‘Stupid people think it’s cool and clever people think it’s funny. Also cool.’ I just had a look on their website and the only sold-out show coming up is in Brighton, which should tell you everything you need to know. Is this the kind of shite they’re listening to in Brighton? Glam rock, the last refuge of the scoundrel. I remember reading interviews where they’ve spoken of their experiences in the playground, and I wonder if they’re aren’t still there – victims of bullying and humiliation who grow into manipulative, wounded monsters, using their little bit of cleverness for the exertion of power over others.

I had planned to conclude by exploring the idea that Fat White Family are a band who have listened to Throbbing Gristle and drawn all the wrong conclusions – for instance, Throbbing Gristle’s songwriting chops are not high up in anyone’s list of things to like about Throbbing Gristle, nor is their singer much respected as the band’s presiding genius and creative force. The visionary stuff, the art, was the music. TG created their own genre and built their own instruments to do it. Say what you like about them, they didn’t ironically copy anyone or anything. Here and now though, that assessment seems generous. Fat White Family sound instead like a band who have listened to Pink Floyd and drawn all the wrong conclusions. Pompous, bombastic, messianic, too sure of their brilliance, and ultimately shallow, empty and narcissistic.

In the interests of balance, the show does pick up towards the end. ‘When I leave’ and ‘Feet’ are both decent songs, which point to a band who are not totally beyond redemption. And it would also be factually correct to emphasise that I’m definitely the skeleton at the feast tonight. There is dancing and merriment here, which is always pleasant to witness. I should also add that I’m only here at all because the photographer Emma Lou Lewis wanted to see this band and take their photographs, so she went behind my back and told our editor I was up for writing a review. Sorry about that, Fat White Family. I didn’t come seeking out beef, but I figure that a band that goes onstage every night dishing out puerile bullshit about Nazis and domestic violence ought to be able to take it. Anyway, Emma thinks it was the best gig she’s seen this year and asked me to mention that it’s revitalised her faith in rock and roll and I hope her photos tell the story she wants. When I work with her I always wind up feeling, and in the best possible way, like I’m just filling up the empty space around her pictures.

So there you go. Takes all sorts, don’t it? Comments, as they say, are open. I’m off to get back to my book about dolphins.