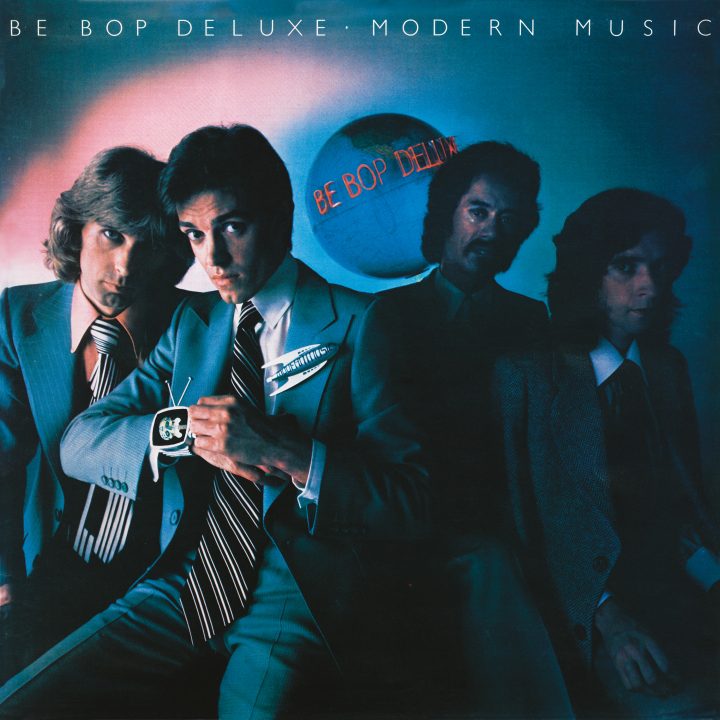 I remember 1976, the hottest summer until recently, and the words from my mother coming in the form of, “Put a shirt on…” as I strode meaningfully across the Dorset sands. And I certainly rued not taking that advice, as later that evening I lay front down, on the holiday chalet’s bottom bunk, sick from sun-stroke. A lesson cruelly learned, but one I certainly haven’t forgotten. Recorded during the months of my living hell, Be Bop Deluxe were laying down their fourth studio album, Modern Music, from a band who produced one of the greatest albums of their day and one that still stands tall today.

Bill Nelson, founding member and chief songwriter, lead vocalist, lead guitarist, keyboard player and ever-present since the band’s inception in 1972, also co-produced this masterpiece. This was along with famed producer John Leckie, who was not only responsible for work by Magazine and XTC, but also more recently arguably the greatest album of the late 1980s, The Stone Roses eponymous debut album. It’s strange, that some of music’s greatest musical moments were produced by the same man, but it’s this classic rock album we’re here to discuss and ‘classic’ it certainly is. The album speaks of its genre & time and here we find it not only with expanded content, but also sitting alongside a newly mixed version, which itself is expanded yet further, on the second disc.

This reinvigorated version of the album possesses a clearer sound with a fuller bottom-end; in contrast, the only way to describe the original mix is woolly in comparison. To say it would be the difference between eating chalk and cheese wouldn’t be far off the mark. The new mix has added a speed to the tracks and as a result, listening through headphones is a far more pleasurable experience. Disc three of this presentation features a set taken from a 1976 BBC Radio One In Concert performance from the Hammersmith Odeon. As you might expect from a show recorded by the BBC, this has been executed extremely well and wrings all that it can from a concert that was 42 years ago, but in audio could very well be just last week.

Disc Four is what is described as an “Official Bootleg”, live at The Riviera Theatre in Chicago on the 21st of March 1976. Along with the usual set, it also features a rare jam, entitled Bill’s Blues. On the whole, the quality of this recording is not a patch on that of the BBC recording, but as recordings go is a “first-person report” of this show some 42 years ago, so I can forgive it. The final fifth disc of this set is visual content from a session of BBC TV’s Old Grey Whistle Test, again recorded in 1976, this time in November. Along with these CDs and DVD, the set also includes a lavishly illustrated 68-page booklet, with many unseen photographs and an essay of recollections by Nelson himself.

As a set for fans, this will no doubt be a certain Christmas present idea, but it is also perfect for newer fans, or those just interested in learning more about this band. This will hopefully inspire those to explore their back catalogue, as there is plenty to explore.

Modern Music is reissued on 29th November through Esoteric.