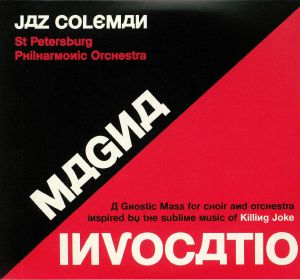 No, really. This is no opportunistic orchestra for hire play the hits of Killing Joke (something for which we should all be thankful). Rather these are thirteen tracks that take on musical themes within Killing Joke’s music. The result is ninety minutes of sublime music that stands as one of the best albums to be released this year.

It’s not the first time that Coleman, Killing Joke’s leader since 1978, has worked within classical music. As a child he studied piano and violin and was a chorister in several cathedral choirs. Even forty years ago, as Killing Joke formed and took off he was studying classical music. An expert in that field, Conductor Klaus Tennstedt, described him as a “new Mahler.” His first classical release, Songs From The New City, a collaboration with Anne Dudley, was released as long ago as 1990.

A Gnostic mass, in case you’re wondering, is a ritualised celebration of the mysteries of existence. Over the course of this album there’s plenty to ponder, so that the rock vs. classical debate hopefully gets left behind very soon. It’s just music, kids, and all the better for it. The orchestra, the St. Petersburg Philharmonic Orchestra is Russia’s oldest.
The promotional track doing the rounds ‘The Raven King’ (see below) is a great example of why this album works so well. It takes the 2010 Killing Joke track ‘The Raven King‘ – a tribute to the former Killing Joke bassist, Paul Raven, who died in 2007, and takes the melody someplace entirely else, while remaining close to the spirit of the original. Those familiar with the music of Killing Joke (hopefully most of you) may expect that translating the music into this new form that it contains the paranoia and rage that characterises much of their music. The surprise is that a) it doesn’t and b) it still works perfectly well. The reworking of 1986 single ‘Adorations’ is another highlight.

As someone who’s long enjoyed classical music, and indeed the work of Killing Joke, this album works well on several levels. Yes, there’s the majesty (I don’t use that word lightly, you understand) and power that you expect from Killing Joke, and the passion from classical music. Indeed, you don’t need to be particularly in either camp to appreciate this album. One that I intend to pass onto both my classical loving parents and rock fans. Nor does it at any point invoke that dreaded spectre to ‘rock-classical crossover.’

In the press relase, Coleman states “The end goal was always to bring magic into the listener’s life in some meaningful way”.

1 thought on “Jaz Coleman – with the St. Petersburg Philharmonic Orchestra -‘ ‘Magna Invocatio – a Gnostic mass for choir and orchestra inspired by the sublime music of Killing Joke’ (Spinefarm Records)”