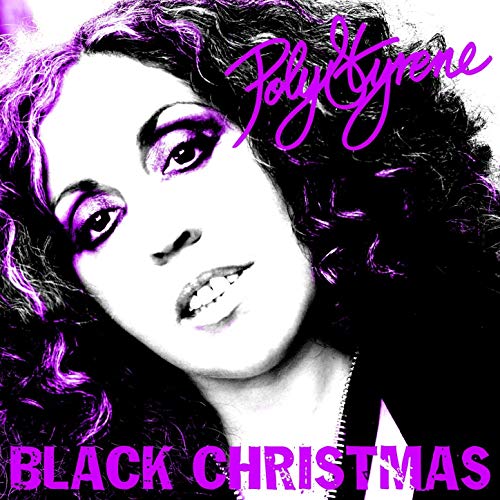 James Turrell’s list of alternative Christmas songs was a cracker but I’ve always rated this one most highly.

For many, Greg Lake’s ‘I believe in Father Christmas’ is alternative enough but there are plenty of others out there. The NME lists 60, Virgin about the same (from the same basic source it seems) and there were 50 on Wow 24/7. You’ll be surprised who’s made one: Sufjan Stevens, Death Cab for Cutie, Sonic Youth, Beck, Modwai, Arcade Fire, They Might Be Giants, The Fall, Cocteau Twins, The Killers, Goldie Lookin’ Chain (‘Dubstep Christmas,’ can you believe it)… I’ll stop there.

This is easily my favourite, especially for its poignancy. Not everyone reading this will recall X-Ray Spex, the 1970s punk band from London that was fronted by Poly Styrene, aka Marianne Joan Elliot-Said, but she was certainly one of the most memorable characters of that era. Quite apart from her stage appearance – she wore large braces on her teeth – you tend to get noticed when the opening line of you first single is “Some people think little girls should be seen and not heard but I think, Oh Bondage, Up Yours!”

Marianne, described as the first ‘joyfully angry punk activist’ was lured into the punk scene like all those latter day celebs at the Lesser Free Trade Hall in 1976 by going to a Sex Pistols concert. On this occasion it was in an empty hall on Hastings Pier. I can’t think of anywhere more depressing. Her band included characters called Lora Logic and Jak Airport.

X-Ray Spex did quite well at first, supporting bands such as The Buzzcocks and playing a two week residency at CBGBs in New York and they have even been credited as leading lights in a British pre-riot grrrl movement.

But Poly left, exhausted, in 1979 and the band soon split up. Her health had always been indeterminate. Born to a Somali aristocrat father (the Said bit) and a Scottish mother, she became a hippie at 15, living between music festivals and getting septicaemia along the way. Later she was sectioned with schizophrenia for a while and later still diagnosed with bipolar disorder.

But she was trained in opera and a talented lyricist and she persevered with a solo career, releasing a couple of solo albums and an EP over the course of 14 years, during which she changed styles, initially to jazz thence to New Wave.

In October 2010 it was announced she would release a solo album in March 2011 called ‘Generation Indigo’ and this track, ‘Black Christmas’, was a free download from it, released in November 2010. At first glance it looks like a ‘zeitgeist’ video with its dystopian images of environmental mayhem, riots and even crucifixion, as it came out just as the economic crisis was reaching a crescendo. She sings “a child was born on Christmas Day but they crucified him anyway,” while the refrain is “Oh no, I’m not merry, no.” But actually the song was based on a killing spree in California by a man dressed as Santa Claus and that image does appear often throughout the video.

It’s in a reggae style and that shouldn’t be a surprise. Before X-Ray Spex she had released a reggae single as ‘Mari Elliot’ that included a hint of the popular ska style as well.

You have to wonder what Poly would have been doing now. ‘Generation Indigo’ was released on the 28th March 2011 to considerable commercial acclaim and some 10/10 scores. Even the Daily Telegraph gave it 8/10.  The work, which managed to blend reggae with electronic synths, was fittingly described by Rolling Stone as “a life force of an album” on which “her searing voice had mellowed but her passion burns bright…”

‘Fittingly’ because Marianne died on 25th April 2011 aged 53 from a fast spreading cancer that moved from her breast to spine and lungs. The album was released in the U.S. just one day before her death. The saddest thing is that on this video made only six months earlier she looks so well.

But her legacy lives in the form of her daughter, Celeste Bell-Dos Santos, who appears in the Black Christmas video and who is front woman for the gypsy surf punk band Celeste Dos Santos and the Tabloid Queens, based in Madrid. She is also co-ordinating, right now a Patreon crowd funding project to “finish Poly Styrene”, offering exclusive access to unseen material and invitations to special events.