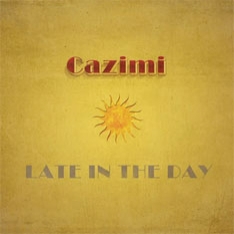 Coming at the end of the year you might consider that this album is rather late in the day, instead of just its title, and with a name like Cazimi, other than a band, you might be expecting a sequel to The Sopranos or at least a suggestion that someone is going to get whacked!! The way arguments used to get settled in the old country, or perhaps it’s me, with too many hours of The Godfather and Goodfellas under my belt?

“Cazimi” is, in fact, an astrological term, a Cazimi Moon being something which can only happen at the time of a New Moon. A term that is used to suggest one of the highest forms of good luck, and good to use if you want something to succeed. Well, it is here that undoubtedly Cazimi sees their future blossoming, but with that aside they are a band who cast a familiar shadow, of Killing Joke or early Escape Club, but be it these faces, or maybe something far more expressive, this band are of another age. Some might say having missed the last train to their destination, although rather than having missed that train, this band is carving their path and producing music of exceedingly good calibre, albeit having settled and made themselves comfortable in the 70s/80s. But having spent my formative years growing up at this time, I am finding their music cuts like a knife through butter and spread on an ample slab of fresh bread. For me, this band is like the very source to life, filling and easy to digest.

With production fitting their sound, big and expansive, like the shoulder pads worn back in the day. And with use of synthesizers, atmospherics and heavy bass, coupled with cutting guitar, this band can certainly strike a pose with their music. And rather than the Italian cities of Lecco, or Bergamo being at their industrial heart, this 4 piece hail from Sunderland in the North East of England. It has been said that they blend their ideas of psychedelia, splashes of 70’s rock and new-age of new-age, to create their brand of solid rock and if you’re thinking Black Sabbath or Led Zeppelin, then think again. I’m loving the Arabian flavours provided in ‘Ghost In The Machine‘, which incidentally I do remember a certain other son of the North-East providing on their 4th album, but this is no fuzz, more likely a band flirting with the sounds of the art-punk of Wire or the post-punk of Magazine.

Cazimi may not be top of many lists – to be that they might’ve called themselves ABC – but that wouldn’t come close to what these guys are producing. No, similar era, different sound, but what they are producing is something I consider is close to their heart and very true. Very, very true. Might I suggest that if I have even given you the slightest taste of what these four Northern Souls are playing, then check out ‘Lost & Found‘ on Youtube and the 5th track here, you won’t be disappointed. Oh and then go and grab yourself a thin crust pizza and bottle of Peroni and resign yourself to how arguments are settled in this new(ish) country.