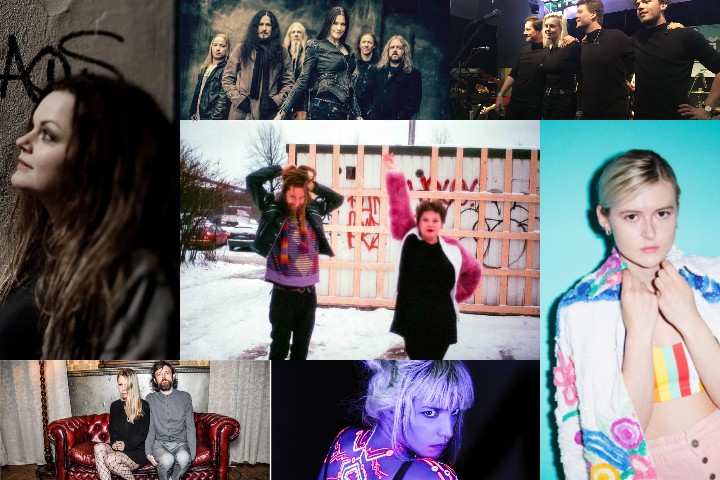 Here is a selection of bands/artists from the Nordic countries who will release albums or EPs in 2020 and who I think will merit attention when they do. Some are established but with a story to tell anyway, others new, with one reinventing herself as a solo artist.

A couple of single releases in 2019, and an appearance at the forthcoming showcase By: Larm festival in Oslo at the end of February, suggest that Das Body will release their debut album in 2020 and indeed that is the case. It is scheduled for March. Since their last By: Larm showing in 2018 the East Oslo band has released an EP, played SXSW and toured the U.S. They also attracted my attention in Nordic Music Scene with the impressive ‘Graceland’ which was on the EP. In Ellie Linden they’ve got a singer who has a ridiculously seductive voice for her age.

But they can be frustrating, too. Not every song has quite the quality of ‘Graceland’ and the album will be their first real test of longevity in what is becoming a very crowded field in Norway. This is the most recent single (November 2019), ‘Against the Glass’, which will probably be on the album.

Speaking of seductive voices, I’m hard-pressed to think of anyone in popular music that can match Color Dolor’s Stina Koistinen. Since Color Dolor’s last (third) album, the award-winning ‘Love’ (2018), which regarded the universal theme of love from different angles, Koistinen has been releasing work in Finnish, including an album, as Stinako, as well as collaborating with fellow Finn Astrid Swan on an EP which explored their medical circumstances and their reaction to them.

Color Dolor’s fourth album is expected in 2020. This art-pop band, currently a duo (the other half is  Nicolas Rein) were once described as ‘future megastars’ in the Finnish press when they were opening for the likes of St Vincent and Susanne Sundfør but haven’t quite got there yet mainly because of Koistinen’s illness, which set them back a couple of years.

‘The Angel’ from their debut album ‘Cuckoo in a clock’ is one of my favourites.

When I heard her single ‘On the bus’ early in 2019 I couldn’t have imagined how much better Ellen Krauss’ follow-up single, ‘Criminal to Love’ would be.

Picking up the award ‘Rookie Artist of the Year’ at the Denniz Pop Awards before she’d released anything, the now 18-year-old seems to have matured instantly with a song in which her powerful Americana-tinged vocals are the centre of attention. Moreover, and this is either a coincidence or a masterstroke, the song plays out to pretty much the same bass riff as Fiona Apple used in her seminal 1996 ‘Criminal’ song and video.

Ellen Krauss’ debut EP ‘First Take’ has just been released and her first album follows in 2020.

Actually Iceland/Luxembourg as only Thorunn Egilsdottir is Icelandic, Mike Koster being the Luxembourger. I know one or two critics find them a little too sugary but Thorunn’s vocals are perfect for conveying heartfelt emotions. They famously shy away from ‘over-production’ and keep it simple. When their drummer left they resorted to using samples instead. New album ‘Esprit de Corps’ will be released early in 2020 and was recorded in Thorunn’s apartment with just a wooden floor and two chairs for company.

They make excellent videos too, partly down to Thorunn’s art director sister, Runa. Every single one is worth watching. ‘123 Magic’ below is from debut album ‘Glow’ (2017).

I’ve written so much about Lydmor (Jenny Rossander) recently that I’ll keep this as short as I can. The most exciting new solo artist I’ve come across in years. She generates the same reaction as when I first saw Anna Calvi, Aurora and Highasakite. Except Lydmor isn’t new, having really only become an international artist after spending time in Shanghai, finding inspiration for her 2018 album ‘I told you I’d tell them our story’. They could probably make a movie out of it.

Or rather she could, having aspirations towards film direction.

The so-far untitled follow-up album, her fourth, will be released early in 2020, probably by March.

For me the engaging factor is her ability to write and perform in contrasting styles with ease, switching from one to another. A single – ‘Guilty (Kill me)’ – has just been released from the new album, an electro-pop piece that introduces R&B elements but I’m not offering that here (it is in January’s Nordic Music Scene anyway).

Rather, this is one of her gentle piano ballads, which I wish she’d write more of, and you’d never know it was the same artist.  I’ve seen her play it live and it was spellbinding. This is ‘Lamppost Light’ from 2014. If this was by, say, Cyndi Lauper, it would go straight onto the BBC playlists.

The champions of the symphonic metal sub-genre, Nightwish will release their ninth studio album in April, followed by a World tour which ends in the UK in December (only London and Cardiff dates so far). It is only their second album with (third) front woman Floor Jansen who has revitalised them with her belting style of vocal delivery since joining in 2013, helping make Nightwish probably the most-followed band of its kind by those who do not necessarily attach themselves generically to metal music.

Which raises the question ‘are they really a metal band’? While the standard metal riffs are definitely there I’ve always viewed them as a sort of metal/prog fusion (chief writer Tuomas Holopainen was influenced by progressive rock bands like Genesis).

Holopainen is on record as saying that the orchestration on the new album will take on a different form without going into detail. For sure, fans will be hoping that he can come up with another of his awe-inspiring concept opuses like ‘Ghost Love Score’, ‘The Poet and the Pendulum’ and ‘The Greatest Show on Earth’.

Video: ‘Shudder before the beautiful’ from eighth studio album ‘Endless forms most beautiful’

When I interviewed Marianne Sveen last August she had restarted work on her debut album, which had been delayed for two years by a family illness. As with her former Katzenjammer band mates Sol Heilo who released her debut solo album in August 2017 and Anne Marit Bergheim who is working on hers (apart from playing in two bands) the intrigue with Marianne lies in which direction she is likely to take.  Recording commenced in November and the album is called ‘Next of Kin’.

One track I listened to while talking with her was a lovely piano ballad. The subject matter of the album will be wide-ranging but likely to include bullying and mental health, subjects close to her heart, and possibly the experience of raising a sick child undergoing distressing treatment.

There is no formal recording of her yet that I can feature here so instead here is a Katzenjammer song that she wrote, ‘Lady Grey’, based on her experiences as a nurse dealing with dementia patients (a role that she actually returned to after leaving Katzenjammer in 2016). (MS in green dress). Expect ‘Next of Kin’ to be quite different.