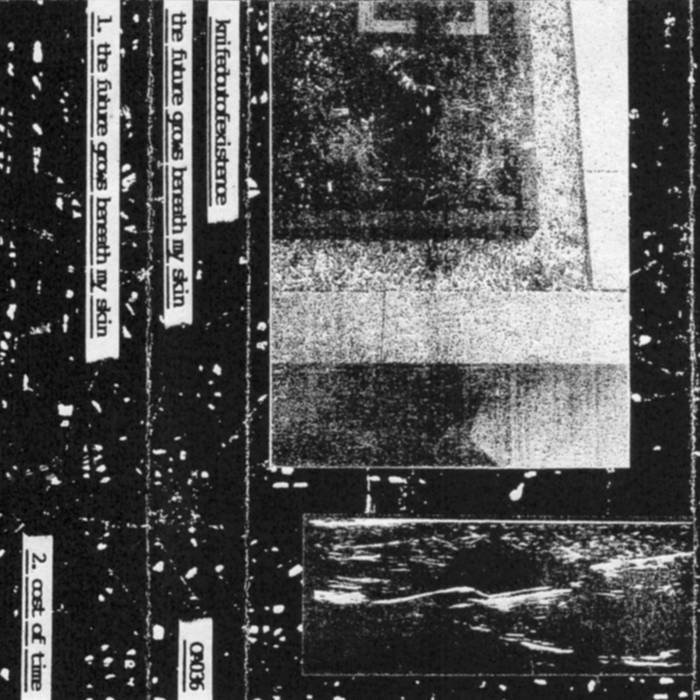 No-Fi label Outsider Art had a bumper 2019, not just because they put out over 10 releases, but because those cassettes were filled with forward thinking noise, drone and downright brutal sonic assaults. The music matched the times, but unlike the inexorable feeling of doom and gloom that permeated the year, Outsider Art releases had a glimmer of hope to them. And this feeling is carried on with their first release of 2020.

Label honcho Knifedoutofexistence recorded an album in the tailspin of the old year that on the surface, the resulting album The Future Grows Beneath My Skin, initially feels like a little more than a live experimentation with distorted electronics. Just turning things on, twiddling bits and taking it from there. However, this is false as the released is filled with fear and loathing for what has passed, but a tender optimism for what is to come. The title track displays this from the way it slowly builds up textures of noise and electronics until it reaches a peak, then like the Himalaya mountain range continually being formed out of tectonic plates, it just keeps rising until we are at a place, sonically at least, that is far from where we started. Brutal drones’ counterpoint airy electronics. These motifs fall into two camps. Some appear momentary and vanish instantly, whereas others gently fade out and reappear later, but in its absence their presence is always felt.

If the opener was a slow burn, ‘Cost of Time’ feels like it surges out of the tracks. Immediately there is a feeling of abrasive aggression to the drones. Static underpins almost every part of the song and we are never given anything like the airy hooks from the opener. Here Knifedoutofexistence is just constantly turning the screw to see how much more we can take.

The Future Grows Beneath My Skin is a timely reminder that there is beauty even in the harshest, distorted and most downright brutal things. After a first listen the album feels like an impregnable cacophony, and yes, at times it is, but once you can scrape away some of that surface noise, you are left with something delicate underneath. Yes, there is an unrelenting air of melancholy that exudes from the music, but it is peppered with feelings of redemption. It is an album that once you get under its skin, it will, in turn, get under yours.

The Future Grows Beneath My Skin is out now on Outside Art.