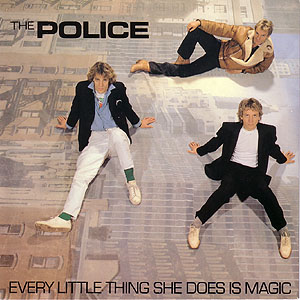 “You consider me the young apprentice, caught between the Scylla and Charibdes.”

Er, no Sting, the thought had never crossed my mind, if I’m brutally honest. But just two years before these lyrics made their way into the 1983 top ten hit ‘Wrapped Around Your Finger‘, the erstwhile Mr Sumner had yet to be swallowed by the pulpit of pretension (yes I am aware how pretentious that sounds in itself) that would infiltrate some of his later works, and The Police were still writing gloriously infectious upbeat pop songs like ‘Every Little Thing She Does Is Magic‘, although it should be acknowledged that its predecessor was the delightfully dark ‘Invisible Sun‘, which marked arguably the greatest period in the group’s short recorded history.

The astonishing thing about ‘Every Little Thing She Does Is Magic‘, though – a number one smash in November 1981 – is that almost half the song is made up entirely of ad-libbing – or at least appears to be, but the track is ultimately so effective that it wasn’t until I received their recently released box set of their 5 studio albums for Christmas, that I noticed it myself, despite having played all these records to death back in the day!

It’s a simple story of a man who is too afraid to tell a girl of his affection for her, but despite the insanely catchy chorus, the part where the song really achieves its greatest slam-dunk is in the deceptively intricate verses. That classical-cum-jazz-cum-prog intro doesn’t initially give you any inkling of the monster refrain to come just a few seconds later, and seamlessly chimes with the theme of unrequited love that permeates Sting’s somewhat tragic lyrics, which sound relatively innocent on the surface but are actually filled with longing and woe: “Every time that I come near her, I just lose my nerve as I’ve done from the start“, “It’s a big enough umbrella, but it’s always me that ends up getting wet,” and “But my silent fears have gripped me long before I reach the phone. Long before my tongue has tripped me…must I always be alone?”

It’s one of those songs that seems to be impossible to tire of, a remarkable tune that could brighten up the dullest party and make even the Grinch rethink his life’s priorities. Just a brilliant record that’s well and truly stood the test of time.

1 thought on “Pop Classics #50: The Police – Every Little Thing She Does Is Magic”