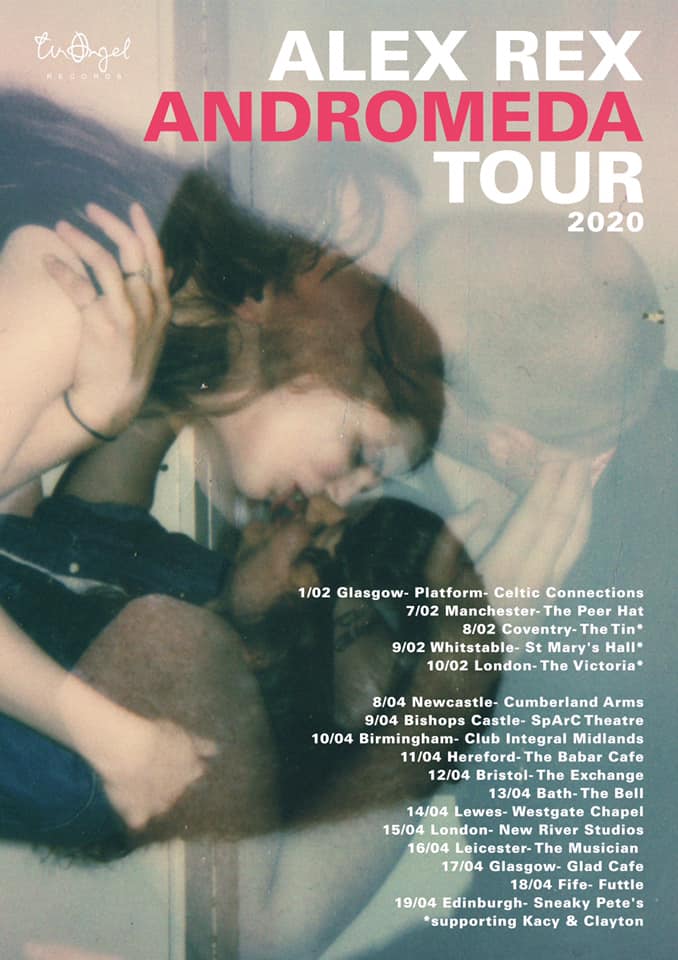 There are live bands and there are studio bands. Then there are those like Alex Rex’s which perform both roles with equal aplomb.

They were in Manchester on the second night of a short tour (more dates will follow later in the year), mainly to promote his new album, Andromeda, which was released on the same day and which was recently reviewed in GIITTV.

Let me say straight off that if you have never seen Alex Rex (the ‘nom-de-guerre’ as he puts it of Alex Neilson) in his solo mode or in a band (he’s in, or has been in many, probably the best-known of which was the now-disbanded Trembling Bells) you are doing yourself a disservice.

Over the years he has assembled a collection of top-class musicians, mainly based in Glasgow and including Rory Haye,  the Parisienne Audrey Bizouerne (Rev Magnetic) and Georgia Seddon (Mike Heron / The Incredible String Band).

Rory and Audrey swap lead and bass guitars throughout the set with complete mastery of their instruments while Georgia could be an offspring of Keith Emerson or Rick Wakeman, her hands a blur as they whip across a Nord Electro and all three of them produce outstanding harmonies.

Alex Rex himself is a contradiction, being one of the most understated drummers and yet the most flamboyant when necessity calls. And while he might not be amongst the leading vocalists technically, he certainly is emotionally.

There has been a great deal of emotion on display in both of his last two albums, Andromeda and Otterburn, on account of a family tragedy; indeed it is a story which makes both the albums. But as when I last saw him in concert, last April, again on this occasion he did not focus wholly on that tragedy – that could be oppressive for a live show – but mixed in some earlier work such as ‘The Life of a Wave’ and ‘Please God Make Me Good (But Not Yet)’ from a previous album, Vermillion and a Cat Stevens‘ cover, ‘Miles From Nowhere’, and all bookended by the rumbustious opener ‘Every Wall Is A Wailing Wall’ and acapella closer ‘What’s The Use In Getting Sober?’

Neilson has a dry humour too, as anyone who saw him play during the Trembling Bells days can testify, dedicating two songs, ‘The Latest Regret’ and ‘I Am Happy’ to two footballers who played for both Leeds United (his own city) and Manchester United, namely Eric Cantona and Gordon Strachan. “Did anyone ever look more Scottish?” came a shout from the audience about Strachan.

But there is one track I want to focus on and that is ‘Master’ from Otterburn, which he described at the time of release thus:  “Master…was written as a letter from an exiled submissive to his darling dom. The language is that of cruelty, emotional sleight-of-hand, fetishised regret and haunted accusation. It is set in the past and future simultaneously – a future that is already ruined.”

The studio version is copied below. The live version is nothing like it. There were several jams during the evening but nothing to compare with the controlled explosion of an IED which was the performance of ‘Master’. Alex Rex had introduced it by asking “Are you still enjoying yourselves? Because this might torpedo that.” What came next was the equivalent of torpedoing the Belgrano; a blistering piece of work.

There is a growing consensus amongst critics that Neilson is fast becoming one of the leading writers in the country. I note some of my peers comparing him to the likes of Dylan, Cave, Cohen and Waits. As a down-to-earth sort of bloke I’m sure he’d regard that as flattering and I prefer to choose my own analogies from a different list.

What is in no doubt in my mind is that he and his band are at the very top of their game where live shows are concerned, a tour de force simply not to be missed.

It was a long night with four artists on the bill, each of which has plenty to offer. From the fuzzed, echo-y psych of The Bear Around Your Head (local lad Nathaniel Scott) via punk-psych Lancaster rockers Pill Fangs, another highly watchable band to add to the many coming out of that small city, to a rare find, Manchester-based Tekla (Szerszynska) who has a simple, stripped to the bare bones, but beguiling guitar and voice elegance.

The Alex Rex tour continues through Whitstable (St Mary’s Hall) on 9th February and London (The Victoria, Dalston) on 10th February. Both shows are in a ‘support’ capacity, to Kacy & Clayton.

Astonishingly, in one case the ‘support’ isn’t named and in the other the venue’s website doesn’t even say there is one. This band shouldn’t be supporting anyone. Except perhaps The Beatles.

The tour resumes in early April with another 12 shows in Scotland, the Norheast, the Midlands and Southern England.