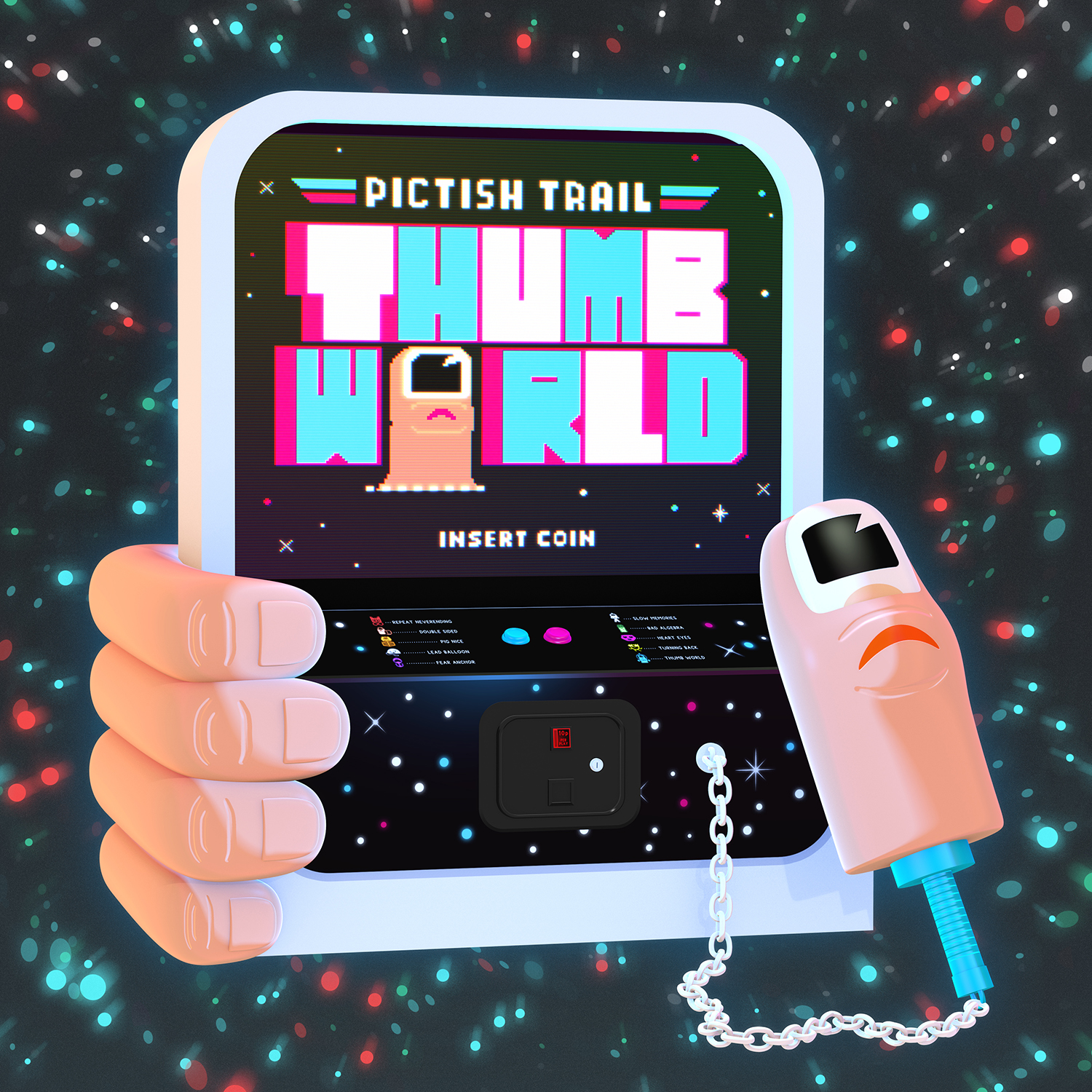 The musical project of Lost Map Records’ Johnny Lynch, Pictish Trail is now four albums and seventeen Green Man appearances old. Basing himself on the Isle of Eigg in the Inner Hebrides, a speck of land with a population of less than a hundred people, Lynch is one of our true independent spirits. His music veers from off-kilter folk to throbbing, psychedelic disco, without making itself quite at home at either end of the spectrum. And although he positions himself as a bit of a clown, there’s an all-pervading air of melancholy to Pictish Trail’s work. His stage persona currently involves boiler suits, lots of face-paint and glitter, and an enormous garland of fairy lights, and the recent promos have found him purveying animated 8-bit cartoons and surreal, Boosh-esque nightmares. Yet if you can separate the work from the colourful imagery that surrounds it, this new LP, Thumb World, is an album of sad, reflective music full of claustrophobia and a longing to escape.

It’s hard not to begin halfway through the second side of the album with the astonishing ‘Heart Eyes’, which recounts a nightmarish, fever-dream encounter with an imaginary bear with emoji heart eyes scrolling endlessly through Lynch’s brain. In his tent, the grotesque creature creeps closer and closer, over a glowering, down-tempo acid gloop. There’s no refuge in the synthetic shell of the tent, just purgatory. He’s interested in the dichotomy between our impulse to turn wild animals into these cute images, and the ultimate hollowness of these anthropomorphs. There’s something in this – the last time I saw a bear with another creature’s internal organs on its face I watching a David Attenborough film.

The bear with heart eyes also crops up on the album’s first track, ‘Repeat Neverending’, and the sense of being locked in a confined, endlessly repeating space suffuses the album’s shifting textures of reverberating bleeps and distortion. Attempts at escape rarely end in success. ‘Fear Anchor’ is an essay in anxiety, a new parent tormenting himself with hope and with tales of pirates. ‘Slow Memories’ drifts through a fantasy of alien abduction, a secret which is both shameful and validating. The chorus sees our protagonist hauled into the light, and lifted into the sky above the trees, suddenly a specimen, a transcendent representative of humanity. Or is he just predisposed and never knew it?

‘Lead Balloon’ seems like one of the most personal songs on the album, also covering a botched escape attempt, in this case, the aftermath of a big night and the resultant hangover. Described by Lynch as a daft song and a kind of an apology to his wife, it takes on a life of its own, a twisted Bossanova of frazzled regret trying to pass itself off as bright-eyed and bushy-tailed. It ends with another example of Lynch’s facility with a chorus that can make the clouds lift – “But I can see you coming out of your sadness / I can see you coming out of your madness” – suggesting a man serenading someone somehow trapped in their own world, coming to meet him somewhere they occasionally coincide. And don’t we all find that relatable?

The other great thread of the album is the endlessly scrolling prison of social media, the Thumb World of the title. It crops up in ‘Turning Back’, a banging bit of trance about a lover harking back to the moment he met his beloved, but able to relive it over and over again thanks to the way that his phone has hoovered up his life. It’s a neat musical joke – the rave scene, for all its revolutionary positivity, always had a touch of the lotus-eaters about it, of that perfect moment in a field in Somerset which promised it would last forever, but never did. “You and me trapped inside a device / controlled by each other’s thumbs and minds”, he sings, trying to hold onto the first ecstatic moments of love, aware that he risks of breaking it entirely as he does so. And what then is this corruption, this handy device that sates our desire for control and communication?

This metaphor of the Thumb World is handled so carefully and so lightly throughout the record that even if there wasn’t too much to unpack here I’d be afraid of damaging it with my big clumsy words if I did so. There’s the Trump-like ‘Pig Nice’ and the comforting existential dread of ‘Bad Algebra’. His most ambitiously electronic record to date it sounds like someone trapped in an ever-repeating, serotonin-mashing cycle of liking and clicking, punctuated by occasional moments of daylight and clarity as they look up from their device and see the sky. Is this really what we evolved these opposable thumbs for?

Thumb World is a triumphant return, and I think, like the best clowns, Johnny Lynch should be taken very seriously. He’s put together a collage that effortlessly weaves the natural and technological, the animal and the human, and which picks at what William Blake, had he been alive today, would have called our ‘mind-forged manacles’. But then today, Blake never would have written ‘London’ because he would be too busy bantering on Twitter with Thomas Paine. It’s the sound of restless anxiety consumed by a sweet, sad air – a lush, melancholy landscape you’ll want to experience again.