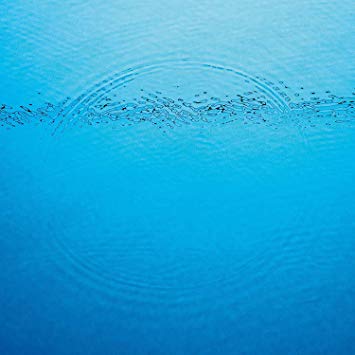 Dan Snaith is back with a new Caribou album, the first in five years. Suddenly follows 2015’s Our Love and returns to the personal perspective of that album. For me, 2010’s classic Swim is the album – the one true album – that will forever lay waste to all before it like a vengeful, if extremely blissed-out, pod of frikkin’ dolphins armed with frikkin’ lasers and I’ll say from the outset that Suddenly isn’t quite in that league. It’s still bloody good though, playful and euphoric with plenty going on, it wears its heart on its sleeve and is packed with musical twists and turns.

It opens with ‘Sister’, rather earnestly promising to mend its ways and presumably have a good hard think about its sexual politics and do better in future. I’m not sure specifically what’s on Snaith’s mind here. Take your pick. ‘Brother you’re the one that must make changes / no one else can do it if you don’t / surely you have noticed things are changing / I can’t do it all on my own’. I agree with the sentiment, but it’s a bit heavy-handed to plonk it right at the start. And unless you’re going to drill down into the detail I’m not sure that the point comes across as anything other than a bit vague and posturing.

Things quickly pick up though. ‘You and I’ kicks in with the effortless grace of Talk Talk at their poppiest before swirling off into something else. It’s a much better use of Snaith’s falsetto and starts exploring the restless collection of bleeps and vocal loops that comprises the rest of the album. ‘Sunny’s Time’ which follows it is spectacular. A sweetly rising and falling piano sample goes ever so slightly in and out of phase, like something he bought off Paul Hindemith at a car boot sale. This leads into a plaintive verse about someone’s smile, which leads slap-bang into a looped splinter of hip-hop, so clipped from whatever context it’s taken from as to be completely abstract, then returning to the tremulous piano. All in less than three minutes.

And this is my other question mark over the record. If this had gone on for ten or twelve minutes it would be heaven. Copious amounts of mind-expanding drugs in the 1990s left me with a lot of patience for this kind of thing and if Steve Reich can get a side of vinyl out ‘It’s Gonna Rain’, then I expect no less from Caribou. Perhaps this is how people consume music these days, but like a Michelin starred chef he feeds you exquisite but tiny portions that leave you wondering if there’s a chip shop open on the way home. Remixes, please.

Speaking of home, ‘Home’ is worked up around a rare soul groove from Gloria Barnes and also clocks in at less than three minutes, but it seems to pull off its relative slightness a lot better. It’s a move that could easily end up lumped in with Mark Ronson’s, or even Moby’s, questionable dabbling in this kind of stuff, but there’s something about the words Snaith puts with it, a simple longing for place, that keeps it feeling right. Perhaps because there’s something very intellectual about the way he puts everything else together, these flashes of warmth feel welcome and authentic.

It’s followed by the genuinely weird ‘Lime’, a jazzy keyboard riff that bounces away into space funk, snatches of opera and the cocktail lounge before everything drops off unexpectedly and there’s another of those tantalising fragments that a greater, or perhaps a lesser talent would have squeezed several minutes out of – a quiet, echoing desert-scape mooching past on its way to another album entirely.

‘Never Come Back’ and ‘Like I Loved you’ are the catchy party tunes, emotionally needy though they are, and at last the groove is given enough space for the listener’s poor frazzled attention span to catch up. ‘Never Come Back’ in particular is a buzz, deploying off-kilter vocal loops and clubby, ecstatic keys. ‘Like I Loved you’ presents us with another delightful portion of wonky, out of phase noodling, this time accompanied by the sweet, glutinous dumplings of an abandoned lover’s lament.

The last suite of tracks ooze with good things and redeem some of the preceding tricksy-ness. ‘Magpie’ – and was there ever a more appropriate avian reference? – is a light and spacious synth ballad and ‘Ravi’ is a good old-fashioned banger which delivers the kind of warm fuzzy dance-floor melancholy that made Avalanches such a thing, but twists it and shakes the formula just enough to make it strange. ‘Cloud Song’ is another of those intimate-moments-with-Dan-Snaith attempts at writing song lyrics. It’s even got the word song in the title as a clue. The magic is in the tune and the arrangement though. Finally, he gives a couple of simple ideas space to blossom and it ends the album with something quite affecting – that time Burt Bacharach wrote a song for Cosey Fanny Tutti.

I feel conscious that in six months I’ll feel something different about this record. You often get that feeling reviewing music – first draft of history and all that. Here it’s more acute. Suddenly is a dense, complex piece of work that’s already shifted shape in the few days I’ve spent with it. Parts flash by too punkishly fast and some of the songwriting feels a bit cliched and ham-fisted. But despite my misgivings, Snaith’s preternatural musical sense holds the entirety of it together in ways I’m not sure I understand yet and the abrupt, intuitive snaps from one register to another are the work of a true master.