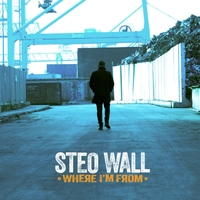 I’m listening to this through a pair of headphones and when the music kicks in, it is quite unexpected when what I assume is a double bass strikes up, deep and low, with every bit of its character presenting itself to the listener. Now Steo Wall starts his vocal, an Irishman, every bit of his identity ringing out in what he describes “is the soundtrack to my life… the trials, tribulations of my adolescence…” And this soundtrack is filled with alarming honesty, of stealing, drug use and whatever it took to get by, whilst at the same time the music is at the heart of this presentation, and all this in ‘Where I’m From‘, the opening number, this is going to a heady ride.

As a singer this musician is extremely eloquent, and as a young pretender, must surely strive to be as regarded as his contemporaries – the likes of Damien Dempsey come to mind, a supporter himself, having said that he has “No lies or gimmicks, no ulterior motives, he’s the real article, this is Irish soul music“, when at the same time someone like Van Morrison, although perhaps considered the old guard, would have to be at the genesis of recorded Irish popular music, and maybe Birmingham’s Mike Skinner and The Streets.

I don’t mean to pigeonhole this artist, as he slips effortlessly into a charming number like ‘These Words‘, a true Irish ditty, complete with penny whistle, fiddle and a gentle guitar that drives the song, “there’s no turning back now it’s a brand new day.” Then in a similar vein, we continue with ‘Sarah Doran‘ (I’m sure there’s a tale to be deciphered here?) and ‘Lost in Nature‘, bringing the content down to the very basic of factors.

No soon do these numbers play out, than the listener is urged back to urban life, as this songwriter once again slips into his city-strides, rapping this tale, but to a background of acoustic guitar, “c’mon, wake-up man“, on ‘What’s Wrong with the World Ma?‘, which is nice to hear, that the singer still considers his mother when seeking an answer to today’s questions!

A series of 3 numbers follow – ‘Best of Kin‘, ‘Unborn Words‘ & ‘Jessie’s Song‘ – that seem to be approaching fairly traditional subjects of family, home-life & love, although it may raise an eyebrow when Steo tells Jessie in the last of these: “I’ll love you ’till the day you die“. (Steo, she may ask, “so I’m going first am I?“)?

We’re approaching the end of the album now and you weren’t kidding when you told us that this was the soundtrack of your life, were you Steo? In ‘Original Bad Boy Material‘, I now know that you have a Micra and you “really like her“, “you get to 60 innit?“, but advertising the fact you “have no tax innit?“, may not be such a good idea as authorities tend to frown on this practice.

We’re running up against the posts now and ‘Pikey’s Rap‘ is a journey into what is considered a common idea of a certain type of Irishman, positioning itself somewhere between Peaky Blinders and a feral cat. “I know you like me, don’t fight me… [knock at the door] I’m selling carpets, look at your floor Mrs, it is half ripped. You want to buy my carpets, nice, if you buy I will give you half price.” I’m sure we have all been there? Be it an Irishman or otherwise, this is an extremely visual number, playing with the musical backing, slipping quite easily through the-passing-of-time, which to be perfectly honest is gone all too quickly.

Finally comes a track I suspect was a given when putting this album together, as it details the artist singing to his unborn child: “Little baby, little babe. Boy or girl, I don’t know your name, but will you be like me, be like me, will you be like me, just like me?” This is a touching number and the kind of song you want to hear at the end of this extremely personal odyssey, where the songwriter has let us peek into his journey through life. You might come away feeling somewhat the voyeur, but remember that Steo has allowed us to be here.

Where I’m From is out now on Good Deeds Music.