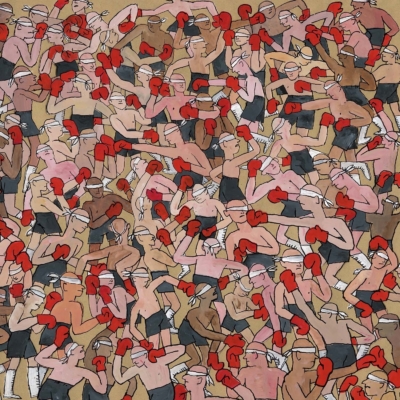 With this EP, the band have bottled up 2020’s London and unleashed its fury, full of spittle, thrashing limbs and violent disagreement with how things are right now.

Imagine John Cooper-Clarke fronting an Echo and the Bunnymen/Joy Division/Stranglers lovechild; Talk Show are taking you there. Glorious.

‘Stress’ opens the EP with a guitar sound lovingly borrowed from 1989, evocative of Will Sergeant and promising great things.

Sullivan’s positively fuming bass line wants to knock your door down and tell you what’s what. When someone far in the future makes a film about the lives of Londoners in the early 2020’s, this track will feature heavily.

Busily constructed, ‘Atomica’ leaves you feeling concussed. It’s a manic, confusing articulation of drums and bass, punctuated with searing guitars and vocals delivered with not attempt to conceal contempt.

‘Banshee’ is touchingly bleak; you feel despair within a few notes of the song starting, and Swann’s vocals grow increasingly exasperated as the track progresses. It’s this track that bring the EP together and showcases the band at their best.

Lovelorn emotions are achingly articulated and the song grips you immediately: “I know who you know but I don’t know you yet/I could be your dog, and you could call me trouble/If you thought about the future, will I be there/If I’m not the one you’re dreaming of/I had a dream we were dancing in the dark together, waltzing holding hands forever.”

The rigidity as ‘Petrolhead’ starts feels militaristic, almost suppressive. It’s an angry crash of a song that leaves you feeling like you’ve just done twelve exhausting heavyweight rounds and come out second best.

Non-nonsense quartet who bring individuality to their musicianship, but when wrapped together in the cocoon of each song, produce a togetherness that is delicately compelling.

As individual musicians they are top draw, and collectively Talk Show are onto something big. This band is taking 2020 head on.

These People is out now on Council Records.