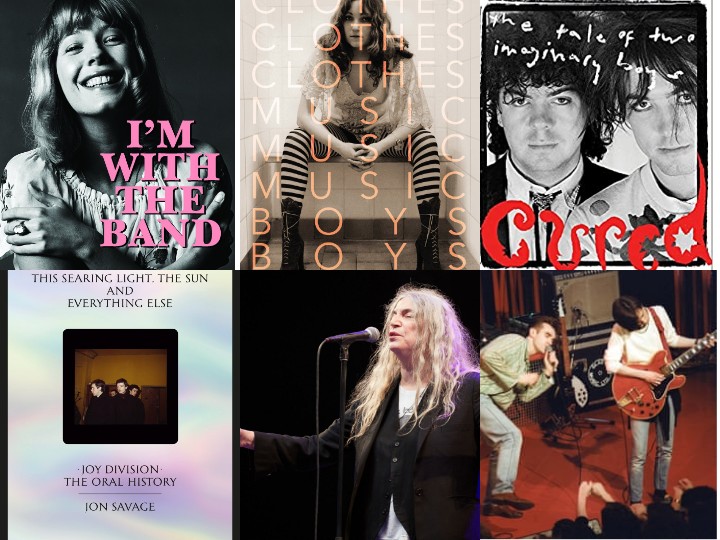 Manon Williams picks out six music books to read during this lockdown period.

The undisputed king of cool, Johnny Marr,  best known for his slick guitar moves as a member of The Smiths, released his autobiography in 2016. ‘Set the Boy Free’ documents everything from the early days of The Smiths to his work as a film scorer working alongside Hans Zimmer.

Marr recalls his childhood and rise to fame upon meeting Stephen Morrissey one early summers day in 1982. The pair naturally bonded over their shared love for Dusty
Springfield and Tamla Motown. Soon they found a drummer, Mike Joyce and bass player Andy Rourke and from there The Smiths were formed. We follow their rapid rise to stardom, performing on the pinnacle of TV shows such as Top of the Pops before embarking on trips to America.

Besides being part of one of the most well-regarded bands ever formed, Marr also recalls the hardship of growing up in working-class industrial Manchester, his everlasting relationship with his teenage sweetheart, Angie Marr and the cataclysmic demise of The Smiths, which would lead him into a string of successful collaborations with the likes of The Pretenders, The The, Modest Mouse and to form the duo Electronic with former Joy Division guitarist Bernard Sumner of New Order. Having refused a potential reformation of The Smiths since their split in 1987, ‘Set the Boy Free’ embraces the band that defined him.

What I enjoyed most about ‘Set the Boy Free’ is that with each page you get to experience what life was like for Marr pre-Smiths. He was a precociously talented guitarist as his love for music started at a young age which was encouraged by both of his musically inclined parents.

As you progress throughout the book, it builds a vivid picture of how vibrant the Manchester scene was in the 1980s, with many successful bands being formed in the city and around Factory records. The Hacienda was new and exciting, providing the ideal place for like-minded musicians or alternative clothes shops would be the place where bands would meet.

‘This Searing Light, the Sun and Everything Else’ by Jon Savage

Acclaimed music writer aficionado, Jon Savage has been recognised as one of the most prolific and respected music writers of his generation.

‘This Searing Light, the Sun and Everything Else’ is a retrospective insight into post-punk band, Joy Division. With frontman Ian Curtis tragically taking his own life. Here we have every band member, relative, writers and photographers recalling what it was like to be around Curtis, Joy Division and the infamous Manchester music scene.

Joy Division immortalised their place in music history with their seminal album, ‘Unknown Pleasures’ and their intensity and introspection still takes on a new meaning for every generation that discovers their music. Every story of a great band from the 1970s or 80s seems to tell the tale of a dreary town in England during the Thatcher era where teenagers felt the most angst. But, in this case, growing up in Manchester was more than dreary and grey. It was an industrialised city with a working-class backbone, that forged each band member. Here we read about the ruin of Ian’s marriage and his troubles with alcohol and drug abuse.

It can be hard trying to retell the story behind a group that has been documented at great length and a band who have great infamy as one of the most influential bands to come from the post-punk movement. But, having Jon Savage as a close acquaintance living this story alongside Joy Division adds tremendous value and a different perspective to the book. It dispels the urban myths and untruths that have been passed around since the band disbanded in the ’80s. With ‘This Searing Light, the Sun and Everything Else’ you get more than another retrospective of a band, you receive an intimate insight into their lives.

Cured: The Tale of Two Imaginary Boys by Lol Tolhurst

‘Cured’ shares the story of Robert (Smith) and Lol growing up in Crawley near South London, described as being ‘dull and unimaginative’ in the seventies hanging in the shadow of austerity. We follow the trials and tribulations of being a teenager faced with angst and the realisation that there might be more to life than what lies in his hometown. Lol and Robert Smith encounter several tense situations which seemed to be a running theme during the era when Punk emerged, as it set its face against the every day way of life.

Grasping on to any distraction from the violence that surrounded them and growing up in an isolated town, the pair gravitated towards music as escapism. This quickly developed into Smith taking the lead role as a singer with Lol on drums and their school friend–Michael Dempsey on bass. They released their first record under the name, ‘Easy Cure’ for Hansa Records before signing to Fiction where they would change their name to ‘The Cure’ and build a devoted fan base of disgruntled and melancholic teens with dyed black hair, and kohl smeared eyes.

Aside from the well told story of how The Cure rose to fame, Lol also addresses some of his more personal accounts, including a lifelong battle with alcohol, which resulted with him being asked to leave the band on more than one occasion. This would be the start of recovery for Lol, who openly discusses his struggle for recovery. Perhaps in an uncharacteristic fashion for any goth group, there is a positive resolution to his story, as he reconciles with his former band to play a four hour-long concert at the Sydney Opera house in 2011 with Lol firmly reinstated as the drummer.

It’s very inspiring to read how Lol dealt with his struggles with alcohol, there is a vulnerability to how openly honest he is about the extent of his addiction. It’s not only about his highs working in music, but also the lows of what the music industry can cultivate and how the pressure of being in a band can spiral into something more serious.

Viv Albertine is the notorious guitarist and brains behind seventies feminist punk band, The Slits. This defiant reflection of her life begins in 2008 as Viv has to face relearning the guitar from scratch after having not plucked up the courage to confront her musical abilities ever since the demise of The Slits in 1982.

‘Clothes, Music, Boys’ documents Viv’s life from childhood to present day remembering her foundation year at art school where she would meet Mick Jones of The Clash, frequent Vivienne Westwood and Malcolm McLaren’s perverse store, Sex, and form her first band, ‘The Flowers of Romance’ with Sid Vicious. Recalling the harrowing experience of shooting heroin (and missing a vein!) with Johnny Thunders of American punk band, New York Dolls.

There are so many elements and facets to Viv’s life that it’s exhausting trying to take it all in, from her emotional tale of failing to conceive without the aid of IVF to being diagnosed with cervical cancer and fighting to survive as a single mother living in London following a turbulent divorce.

Ever since The Slits were formed, Viv has commanded respect from everyone she’s encountered. Here she writes with wit, warmth and insight about her experiences. The Slits were notoriously volatile and uncompromising in their look and sound, they were pervasive feminists in the face of an era that demanded stay at home mums and conservative jobs. Being in a punk band was frowned upon by the establishment, but the movement provided a catalyst for a new wave of culture. The Slits being at the forefront of it.

Pamela Des Barres is perhaps a name not known to many but was once a renowned musician and actress. She found her fame as a groupie hanging out with the likes of legendary Rolling Stones frontman, Mick Jagger. ‘I’m With The Band’ is a story of rock’n’roll’s height of hedonism, self-indulgence and living up to the expectation that music exudes sex, drugs and debauchery.

Throughout the book, you’ll find thrilling encounters with Jimmy Page, Mick Jagger, Ray Davies and Dave Navarro. It reveals the unadulterated behind-the-scenes view of London’s swinging sixties. Only the favoured few were granted access to this circle of rock stars, journalists and managers. Pamela breaks down her journey as rocks famed groupie and muse for Jagger.

But, ‘I’m With The Band’ also has a light-hearted playfulness to it as Pamela recalls her coming of age story during an era that saw the first moon landing, an assassination of a US president, the Vietnam War and The Beatles.

‘Year of the Monkey’ Patti Smith

‘Year of the Monkey’ is a sheer insight into a romanticised account of Patti Smith’s life. It’s not as if she moves through the world but instead glides, recalling her dreams interspersed with snippets of her everyday life. Already regarded as one of America’s finest singersongwriters, it seems unsurprising that her latest memoir would be anything short of poetic and moving.

Following a run of New Year’s concerts at the San Franciscan Fillmore Theatre, Patti Smith finds herself ready to descend on a solitary year trailing across middle America like a frontierswoman, ready to sling a poetic quip at anyone who tries to deny her of her independence.

The book starts as she checks into a place called, ‘The Dream Motel’ where reality bends, and the line between fiction and fact are blurred. We follow Smith while travelling across America from California to the harsh landscape of the Arizona desert, idly snapping photos and meeting friends along the way, such as dying playwright Sam Shepard and music producer Sandy Pearlman. Before leading us through a further winding road of imagined places, dreamscapes and a republican America.

Her narrative is effervescent and profound, as is her music; she is unmatched in her ability. This might be a slightly biased account of Patti Smith but ‘Year of the Monkey’ is unequivocally a touching tale that would benefit anyone who finds themselves somewhat lost or feeling melancholic during these unprecedented times.

Which six music books would you recommend for lockdown reading lists?