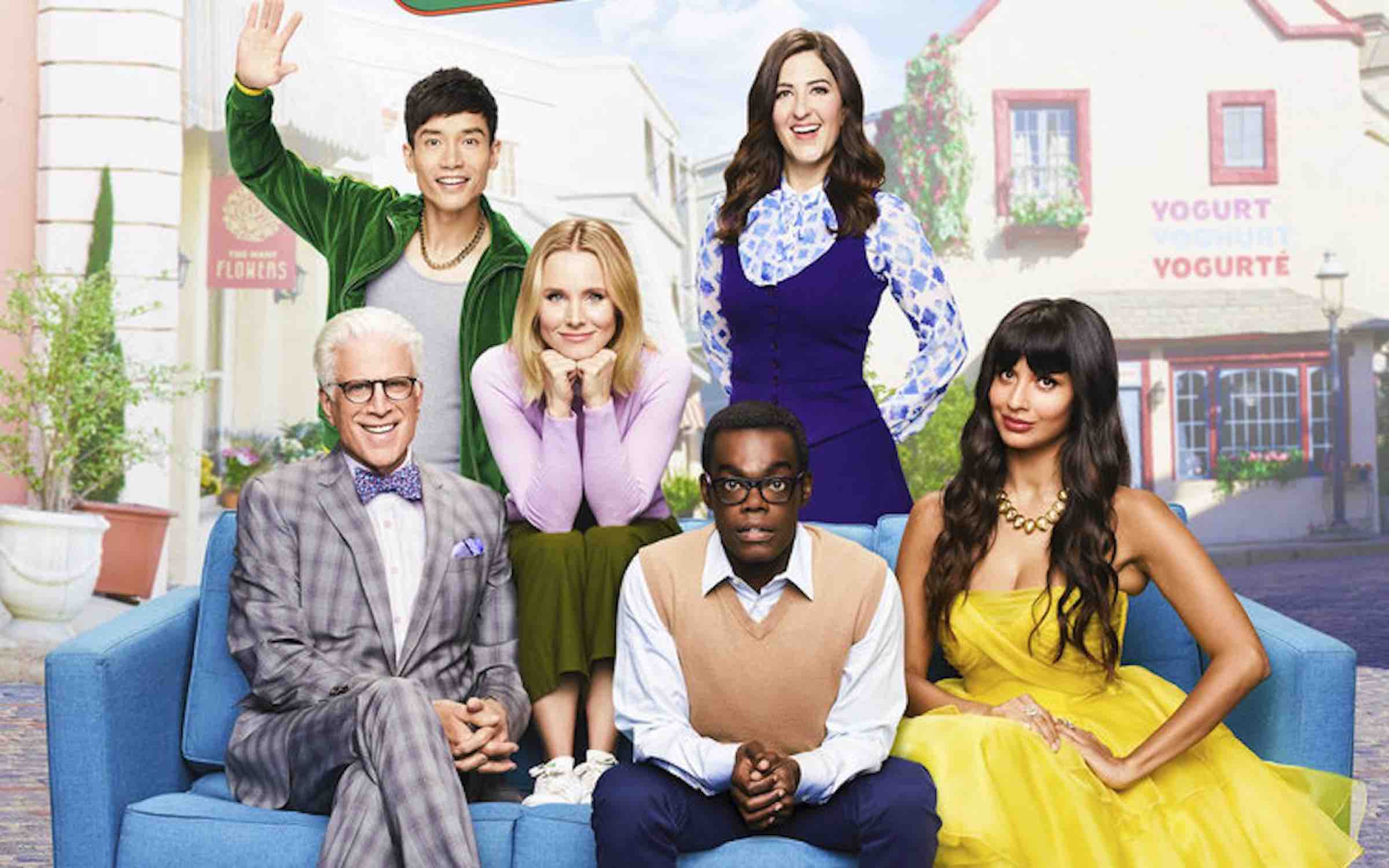 SPOILER ALERT: This article contains spoilers for all four seasons of The Good Place. If you read this article and complain in any way about spoilers, I will personally come to your house point to this paragraph and shake my head in a way that will haunt you for the rest of your life.

There have been many TV shows over the years that seem to have been sprung from the minds of the dementedly illogical, whole premises carved from a gaping canyon of absurdity, none more so than 1965’s My Mother the Car. This bewildering, 16:9 insanity stars Jeremy van Dyke as Dave Crabtree, who on purchasing a car at a used car lot, discovers that it is, in fact, the reincarnation of his mother. This Freudian Knight Rider only lasted a single season, perhaps due to the fact that viewers were made to feel slightly icky watching a man literally enter his mother. Sometimes from behind. If My Mother the Car is the craziest idea for a TV show ever, than perhaps Michael Schur’s epic The Good Place runs it a close second. A several hundred-year, multi-verse journey through the afterlife, ethical philosophy, inexhaustible fart jokes and back again is surely the most experimental studio sitcom in decades, probably ever.

Now that the swirling, magical magenta dust has settled over The Good Place’s fourth and final season, this seems a ripe time to play some fantasy football and think about where it sits in the pantheon of all-time sitcoms. The Good Place very much feels like a show split in half, that the ending of Season 2, with Team Cockroach being sent back to Earth to create a new timeline changed the show in subtle but ultimately fundamental ways.

The first two seasons of the show, while creating 802 different realities, featuring flying shrimp and a twist for seemingly every half a page of script, is actually quite contained. Season 1 is the story of a group of people attempting to become better people through book-learning and experience, while avoiding being sent to hell or The Bad Place. The end of Season 1 in which Eleanor (Kristen Bell) discovers they’ve been in The Bad Place all along, is up there with the great fictional twists of all time. Season 2, or at least two-thirds of it, is effectively the same story – except this time their previously demonic jailer Michael (Ted Danson) has joined the team. Despite the complexity of the world, the visual style and the theoretical concepts, the overarching plot is relatively straight-forward; five people and one not-a-girl-not-a-robot against the world. Season 2 in particular is an astonishing achievement; a tour-de-force of characterization, ambition, jokes and beautiful romance. What other show could make a dusty, intellectual philosophical concept like the Trolley Problem a scene of pure blood-splatter slapstick, but still actually teach you something about ethics. Driven by the relentless brilliance it’s cast; Bell, Danson, William Jackson Harper, Jameela Jamil, Manny Jacinto and the absolute breakout genius of D’Arcy Carden, you sit and gawp in awe at the end of Season 2 and think ‘how can you describe this anything but The Greatest Sitcom of All-Time?’

And then, for many people, came The Fall. Schur’s decision to plunge our heroes back onto for Earth for a brand new timeline didn’t destroy the show as some viewers and critics have claimed, but it did profoundly change its dynamics. The show now operated on a vast global canvass, rather than one, while set in the afterlife with Goliath-size Ladybugs, was essentially a group of people living in a small, digital village. The show’s way of concocting the group into living in the same place once more, as participants in Chidi’s study on near death experiences in Australia works well enough (especially if you side-step the fact there is no logical way Eleanor or Jason could afford such a trip). But from here on out, The Good Place slowly changes from a show in which the group learn about becoming better people from books and contained experience, to learning so by going to war with the demons from The Bad Place. While still informed by those ideas, it no longer becomes a show about the theories of Kant or Scanlon but a battle for the eternal survival of humanity. With loads of great fart jokes though. This itself is not necessarily an issue, one of the reasons why The Good Place should be regarded as one of the great TV shows of all time is the way in which it continually destroys its fictional world, both figuratively and literally, in a form which above all still rewards stasis.

But this change to the overarching plot exposed a problem that didn’t seem apparent during the first two seasons. The Good Place has a distinctly shorter run compared to most U.S. studio sitcoms, which in general shoot for 24 episodes a season. In stark contrast to UK sitcoms, which run an average of six episodes, this itself was subject of brilliantly niche joke on the show itself when Tahini shows Eleanor her favourite show ‘Deirdre and Margaret‘, which ‘ran for 16 years on the BBC. Almost 30 episodes.’ The Good Place, with its 13 episode season run, is by necessity somewhere in the middle. A six episode run would not be long to fully explore the ideas and create a fictional world large enough to contain them but 24 episode would have destroyed the show before it began, because in order to be on for six months a year, your show needs total elasticity to allow for the continual depletion of story. A 13-episode season allowed the show to be both ambitious and contained, short enough to speak with narrative finality but also long enough to carry off the show’s dizzying scope.

Yet, as the show became gradually more complex and morphed towards creating a blueprint for which the entirety of the humanity can be fairly judged for their moral virtues and transgressions, The Good Place felt increasingly rushed, like every episode needed an extra act. During Season 4 we are introduced to Team Cockroach 2.0, as the original gang construct a new ‘’Good Place’’ test to prove humans are not solely worthy of eternal torture and the show creates huge continuity and seismic changes to its fictional universe in the space of sometimes just a few minutes. Take penultimate episode ‘Patty’ in which the gang finally, after hundreds of years reach the real, fabled Good Place. Only to discover that it is essentially broken and needs fixing, and the problem takes five minutes to solve. It takes them five minutes to fix literal heaven. The resolution is sound, if simplistic, and offers a snapshot of the problem that dogged the end of Season 3 and the whole of Season 4. A show almost trapped by its own wonderful but relentless imagination, creating endless logic problems that must be solved but with less and less time to do so.

Which is not in any way to argue that Season 4 of The Good Place is not good. It’s a wonderful, bold, hilarious and devastatingly poignant season of TV, leaving so much of sitcom history behind in the shadows. For a prime-time studio sitcom to say so much about the human condition, ethical philosophy, progress, the nature of judgement and farting, would have been unthinkable even ten years ago. Yet it still feels flawed in a way niggles in your gut as you watch, still reeling from the extraordinary high of Season 2, the show does feel compromised – if only very very slightly.

Is The Good Place is greatest sitcom of all-time? Who can ever really say but given I’ve spent 1,300 words talking about it, I guess I should offer a conclusion. Season 2 of The Good Place is unequivocally the greatest season of sitcom of all-time (don’t @ me, as they say), there is no argument. From atop the hill at the high-point of greatness, the trajectory is unfortunately only one way. And the show doesn’t go down very far, mere millimetres – but just enough to make you think that maybe it’s on the podium but not quite clutching the gold.