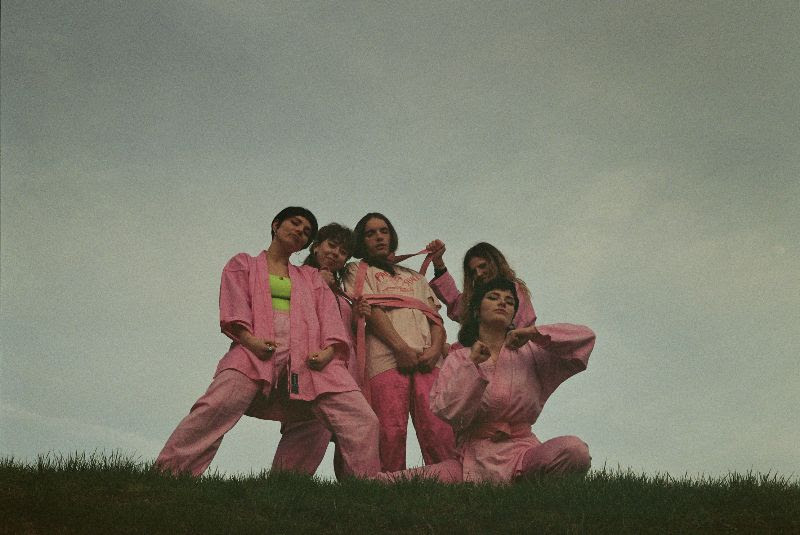 Panic Shack return today with the kick ass video for their new single ‘Jiu Jits-You’, the quintet’s second single and the follow-on to February’s debut ‘Who’s Got My Lighter?‘. Once again recorded by Tom Rees of Buzzard Buzzard Buzzard at Rat Trap Studios, ‘Jiu Jits-You‘ is a whirlwind of riot grrrl attitude that knocks back unwelcome advances and nips them in the bud.

One of the first tracks penned by the nascent Panic Shack, ‘Jiu Jits-You’ can trace its origins back to one of the band’s first nights out together. As vocalist Sarah Harvey puts it,  “on one of our first band outings to a bar, we were scribbling lyrics and ideas onto a paper plate when a group of guys kept barging into our conversation to chat us up, they were buying us cocktails we hadn’t asked for and we had to politely decline… they were interrupting our creative flow.

“Ems and Romi had been to a jiu jitsu class the week before so when we came up with jiu jits-YOU it was essentially a stroke of genius, we found it hilarious. The whole way home that evening we were freestyling lyrics based off the new found jiu jitsu theme and our uncomfortable interaction with the men from the bar… we had started something special. This is where the jiu jitsu gi’s come in (the suit 🥋). Fast forward a few weeks, we really committed to the song at this point, we ordered 4 gi’s online and dyed them pink in megs bathtub… now we looked the part.” See the press shot above for evidence of those outfits – ain’t nuthin’ but a gi thang.

‘Jiu Jits-You’ comes accompanied by a suitably DIY video, a whirlwind of comic book-esque animation – lovingly crafted by guitarist Meg Fretwell – that tells the origin story of the track with footage shot by the band from their respective lockdowns. Creative direction on the video came from Edwin Burdis and it was edited by On Par Productions.

Comprised of Sarah Harvey (vocals), Meg Fretwell (guitar/backing vocals), Romi Lawrence(guitar/backing vocals), Em Smith (bass) and David Bassey (drums), the band were officially formed in Cardiff in late 2018 as an affront to how music can feel like a ‘members-only club’ at the best of times, a phallocracy at the worst.  “We started the band because we’d spent years going to gigs supporting our indie boy bandmates,” explains Lawrence “One day we thought ‘why aren’t we doing this ourselves, surely it can’t be that hard?’. In the beginning, we just wanted to give it a go and have a bit of a laugh, but now we can hopefully show people that music doesn’t have to feel like a ‘members-only club’ or as something that is out-of-reach. If we can do it, literally anyone can!”