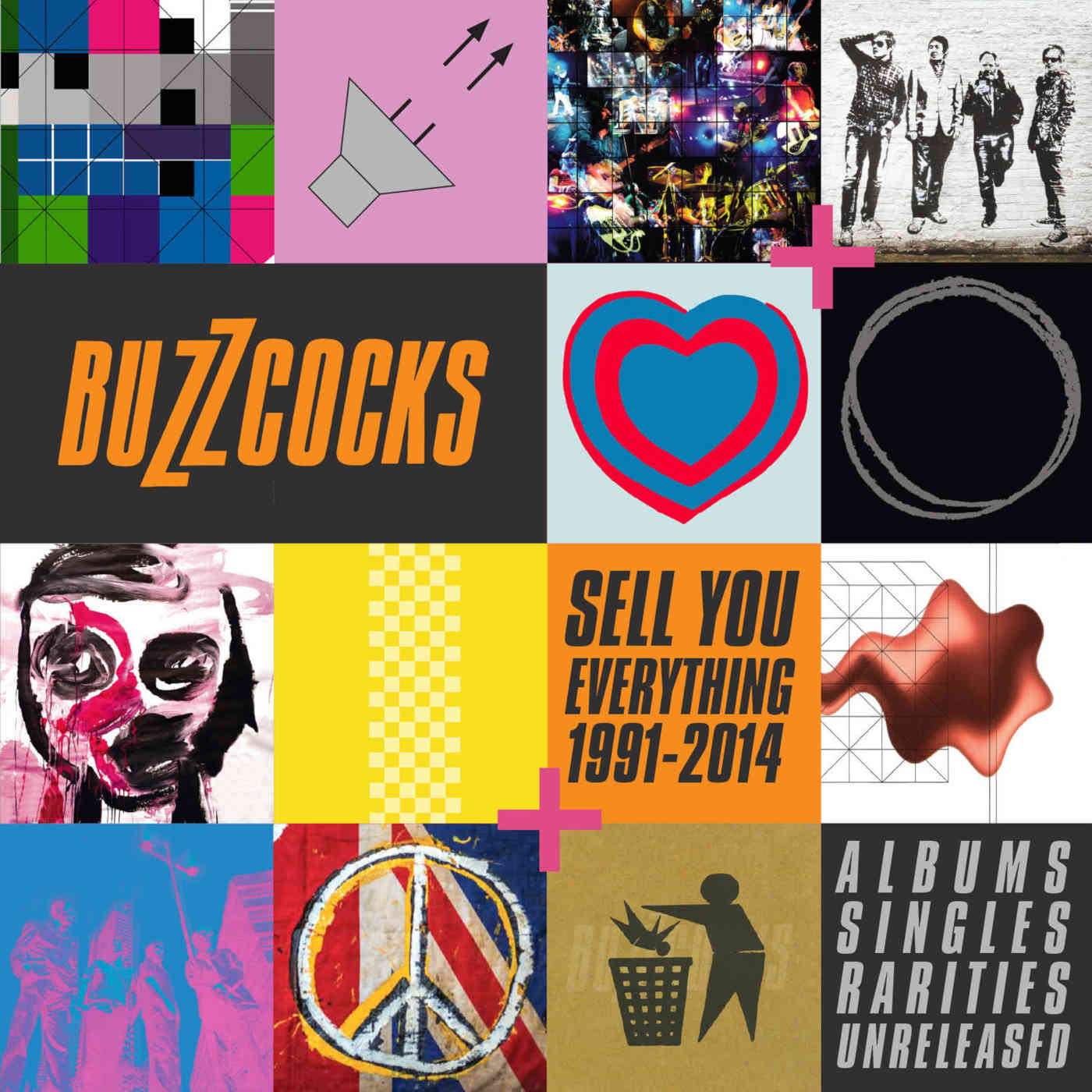 The “Buzzcocks” have become more than just a band. With the creation and broadcast of the (sadly missed) TV show Never Mind The Buzzcocks combining 2 popular punk references, they have entered the collective psyché and people who may never have heard of the band themselves, will certainly know their name. This collection looks at the second phase of the band’s career, leaving the hedonistic days of the 1970s behind them and rejoining the band from 1991. The demo album Shelley and Diggle recorded, setting out their stall for this new phase. The track that introduces this set is ‘Dreamin‘ which shows just how competent the partnership was. This number opens with Shelley’s distinct vocal, offering up another truly awesome pop moment similar to that which saw them step from just another punk band to punk gods when they released ‘Ever Fallen In Love (With Someone You Shouldn’t’ve)’ taken from the Love Bites album in 1978. Only this time “…I just can’t get you out of my mind…“, from ‘Dreamin‘ replacing the now-familiar ‘Ever Fallen in Love…‘, another tune I will be taking to my unconscious hours I am sure. This is a very good sign of what’s in store across this box set and not just The 1991 Demo Album. With vocals offered by both Shelley and Diggle, on this first of 8 albums, the “Demo” offers a 21 track content of both the original material, and demo versions of songs that would see their time come later in their career. Other highlights on this album might be considered the Daltrey tinged ‘Successful Street‘, in which modern life has a spotlight turned on it. ‘Tranquillizer‘, which, with its glorious use of wah-wah, would certainly find its place sooner, as 90s indie took off and the demo version of ‘Isolation‘, which would see its place on 1993’s Trade Test Transmissions, but hey, this is punk royalty the Buzzcocks, so it’s unlikely you will find a rotten apple here. These were recordings that saw Mike Joyce of The Smiths join the band on drums and is certainly worth investigating if not just for that. But of course there is a whole lot more.

It is Trade Test Transmissions that follows and as an aspiring critic, this was the time I first saw the band in person. Earlier, like many, we had heard their sounds on the radio and TV, but to see the band in a small venue (in this case, it was Leicester’s Princess Charlotte) and to see the pairing of Shelley and Diggle performing their songs right there in front of me, was something I shall always remember. As for the album, it wasn’t just “business as usual”, for this album had filled the space that punk had missed, and during the time spent away from the band, Shelley and Diggle had evolved their sound. Shelley’s writing of simply fantastic pop songs was still there, but musically the new back-line had brought something to the band that had inspired a laid back urgency. It was no longer a case of “we know where we are headed, now we have to get there.”, it was more a case of “let’s open up the throttle now“. TTT was an album that reminded fans, both new and old(er), that Buzzcocks was not just a point in time, that these musicians were still very much a viable force in music and whether it be Punk, Rock or New Wave, Buzzcocks still had something to say. This was not a band who were just content to rest on their laurels and certainly, one whose thirst was still unquenchable. On this disc, the 15 original tracks are joined by a further 8 demo and unreleased numbers. When you hear tunes like ‘Libertine Angel‘ and ‘Roll It Over‘, it’s easy to see just how TTT could have become a double album and far from being spent in any way, it was obvious that this band were still hungry to show more.

Next comes All Set, an album which saw the band work with musician/producer Neil King, who had previously worked with the likes of The Undertones, Nick Lowe and produced work for Elvis Costello and Menswear, to name a few. This album saw the band’s sound gain a far heavier edge, although some might suggest a more sluggish sound. This version contains an additional 4 tracks, which were previously unreleased demo versions of those featured on the album. These themselves do show the job a producer does, and for this are certainly worth hearing. Now we’re cooking! With the 4th disc and sixth on the Buzzcocks album roster, this shows just how malleable a band Buzzcocks are. Bringing synthesisers to the band’s sound, this saw them play with the concept of “Krautrock” quite brilliantly and where it might’ve been considered a step too far by some fans, again it showed just how inventive the band were. With a bonus of 2 tracks that are not featured elsewhere, the bands take on The Small Faces single ‘Here Come The Nice‘ has the feel of an 80s John Hughes soundtrack and ‘Autumn Stone – Stevie’s Buzz‘, a feel of 60s/70s East Coast rock, so perhaps wouldn’t have sat quite so easily on this album as other numbers did?

With 4 albums in the bag, bringing the band into the 21st century was the eponymous Buzzcocks and yet another sea change. This saw Buzzcocks go in-house as far as production goes, as bassist Tony Barber stepped up to the plate producing what was most certainly a “punk” album. With a 12 track content on the original release, this version sees an additional 4 tracks added of demo and live versions, as well as track ‘Don’t Come Back‘. Flat-Pack Philosophy is up next and comfortable with the in-house production by Tony Barber, this core team of Shelley/Diggle/Barber seemed well set and the production on this album certainly seems extremely well done, lively and with impact. 8 additional tracks are featured here, ending with the live version of ‘Sixteen‘; this puts Buzzcocks exactly where they are meant to be, as Shelley sings “…and I hate modern music. disco, boogie, pop. They go on and on and on, on, on, on, how I wish they would stop.”.

A Different Compilation followed in 2011 and did exactly what it said on the label, with the band assembling, playing a selected live set from the back catalogue, but this time in the studio. At this stage Tony Barber had left the band to work on the Sex Pistols World Tour, but bringing in Chris Remmington on bass, the band was complete. Dare I say it, in the unlikely event that you are new to the Buzzcocks, then this might be the perfect access point. 24 songs from the catalogue, that you can imagine being played exclusively for you. A simply brilliant set, including ‘Boredom‘, ‘Whatever Happened To?‘, ‘Noise Annoys‘, ‘What Do I Get‘, ‘Orgasm Addict‘ and of course, the song that still receives regular airplay ‘Ever Fallen In Love…‘. Completing this set is 2014’s The Way, an album the band released via Pledgemusic and sadly will be the last Buzzcocks album where Shelley/Diggle played a part. The band’s founding member and songwriter Pete Shelley passed away 4 years later in December 2018. This album shows that Shelley’s lyrical talent was a rare one, as he tackles the subjects of the moment in a very palatable musical form. The album’s title track sees him voicing his concern over terrorism and love in a post-apocalyptic setting. But with an additional 7 tracks, completing this well written and produced album, which sees punk playing an amicable partner to pop. This fine set bearing the tongue in cheek title Sell You Everything is certainly worth investigating.