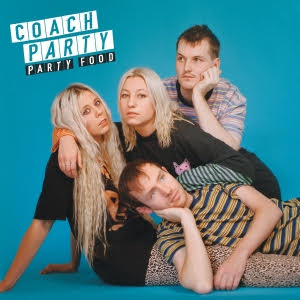 Saying this concise six-track offering by Isle of Wight four-piece Coach Party contains at least four tracks worthy of a Hollyoaks montage might lead you to think it’s a load of old rubbish. Hollyoaks is where dreams go to die after all. However, one thing that is occasionally interesting about that cesspit of mediocrity is its choice of music. Not up there with the musical selection available on Come Dine With Me on the same channel, obviously, but what is?

Party Food is the perfect mix of spikey vocals from Jessica Eastwood, Britpop-era spunky but unthreatening guitars, crescendos a go-go and is the perfect soundtrack to an enthusiastic argument when an affair is revealed followed by an angry walk in the park.

That may sound a little unkind but it really isn’t. This is a fun record if undoubtedly a touch dated. It’s defiantly British and defiantly domestic. There are soaring guitars and outward-looking ambition on crashing opener ‘Oh Lola‘ but otherwise, there is a personal and suburban atmosphere about the whole affair. Perfect to fall out with your boyfriend over. Then head to the pub.

It would be true to say there is little here to elevate Coach Party above previous incumbents of this parish – eg Echobelly, Sleeper et al. However, it’s so anachronistic, and Britpop is now such a worryingly distant memory, Party Food is very innocently enjoyable. Great rowdy hooks, fine pop sensibility, marvellously perfunctory vocals performed with commendable enunciation [itself a great trope of the genre, of course] and a breezy joie de vivre.

Not going to win any awards as the new new but Party Food is nonetheless compelling. Despite its shortcomings when viewed on an intellectual level, it’s a marvellous addictive pop record. Hard not to hop about and smile when listening to it, in fact. There’s life in the old dog yet.

Party Food is released on 12th June through Chess Club.