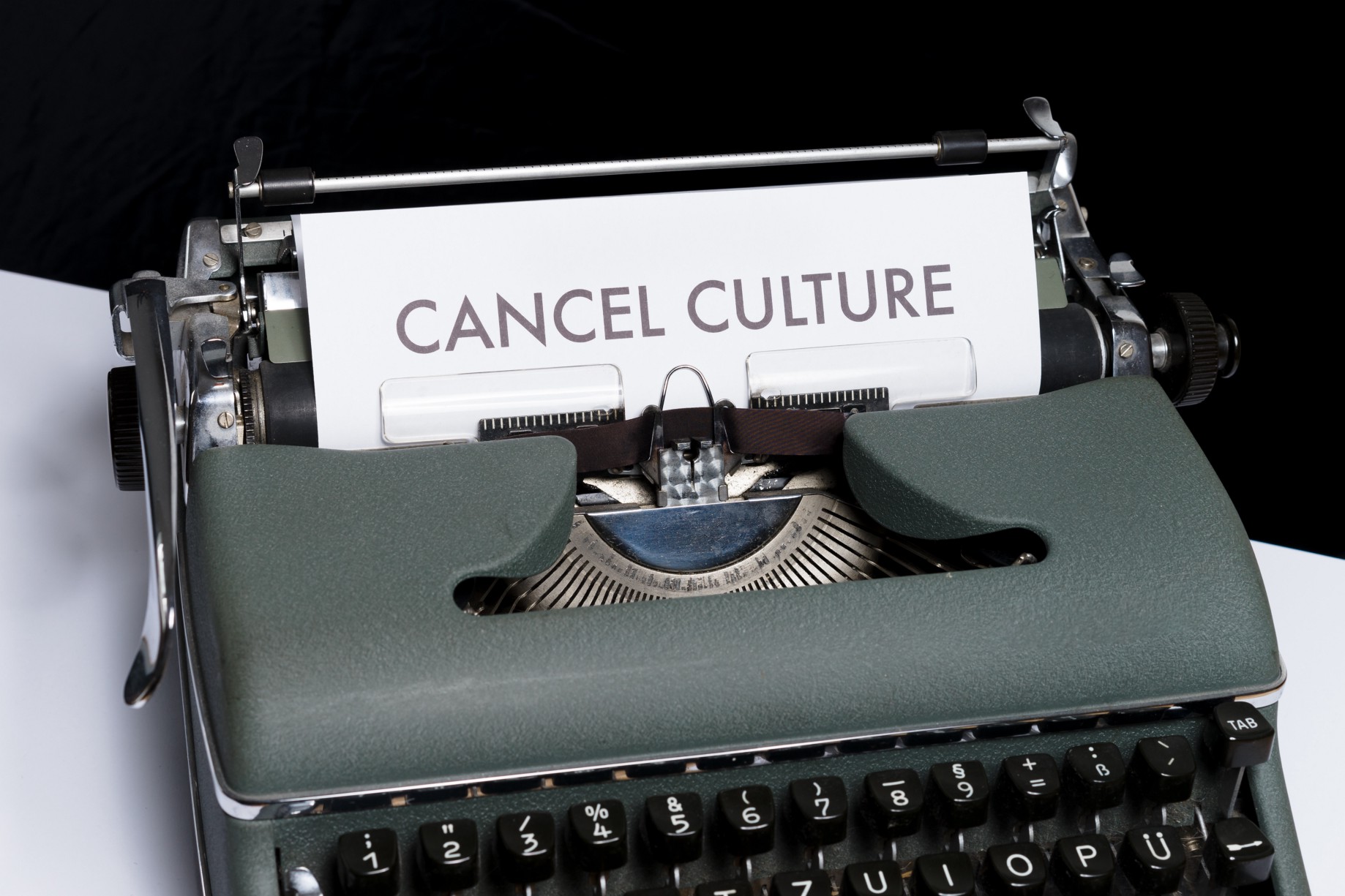 I felt quite strongly that I wanted to write something about ‘Cancel Culture’, but I also felt really worried about doing that. I knew there was going to be a possibility that if I poke the bear on either side of the debate then I might get a stream of abuse on social media. That fear galvanised within me, which is why I feel it is so important to write this. I feel that there has suddenly become a centring of this argument alongside the current ‘TERF wars’, and that way only danger lies. I also know that by nailing my colours to the mast on either side of this particular twitter-fuelled dragon I stand to lose friends or followers.

This does, of course, assume anyone actually cares about my opinion, and as a cis white woman I can perhaps be forgiven for naturally assuming people might (joke!). It is important to state that I do not have any skin in the game here, so I speak from a place of immense privilege and I will be careful to try and balance that by including some excellent voices, who deserve to be heard more than I do.

Before we go on, I do believe Trans women are women and Trans men are men. I believe de-transitioners deserve to be heard and respected. I think women have every right to express their opinions and lesbian women should not be demonised and neither should Trans people. I hope that most people reading this agree with all those points. If you disagree with any though, please keep reading and let’s see what we can agree on. If you feel deeply offended by any of those points, please do keep reading as well, but I realise we may find little common ground.

Let’s start with ‘Cancel Culture’ as a concept. Collins dictionary defines it as “a social climate in which a person, organization, etc is likely to be ostracized in response to a perceived wrongdoing”. I think we can all recall several examples of where this kind of ‘shaming’ behaviour has happened. Some of those examples may confirm our own beliefs. For example, I cannot pretend that as someone with Jewish heritage seeing a self-proclaimed Nazi lose their job isn’t immensely satisfying. It does feel like justice and it does feel ‘right’. I feel justified for taking some delight, some schadenfreude. But is it right? In this context, anyone who isn’t a white supremacist may indeed say yes. But what if we take another less clear-cut example.

Paul Chambers hit headlines in 2010 when he made a joke on Twitter. He joked about blowing up an airport in a light-hearted tweet in reference to the airport being closed when he needed to use it. This mis-tweet landed him with a criminal record and a £1000 fine until it was overturned by the High Court after a high-profile appeal, including celebrity support by comedians such as Al Murray and Stephen Fry. I think most of us would see this as a victory for free speech and defend him, even if it wasn’t a very funny joke. The two seem clearly unequal, the difference in my opinion being the intent, where one comes from a place of hatred and the other quite innocent. That is how we can draw our moral lines in the sand, when actual laws haven’t been broken.

However, as someone who values free speech, I often find myself defending the very people I dislike. I cannot stand Nigel Farage for example, I think he is dangerous, ill informed and doesn’t deserve to be heard. But, in a free society we must allow voices to be heard, even those we don’t like, because when we don’t we create the kind of culture where people who don’t fit the narrative are not allowed to speak. That is dangerous for diversity and is on the path to a totalitarian regime. If someone crosses a line and commits an actual crime though, they must feel the full force of those legal and social consequences and hate speech is a crime.

Unfortunately, perhaps, “I do not like you” is not hate speech. “I do not like you because of your race” is racist though and can be hate speech and therefore a crime. “I do not like you because of your race and others should hurt you and hate you” is incitement of violence and racial hatred and definitely a crime. But people are not legal experts and people rarely express themselves as clearly with their prejudice, so it can be hard to determine sometimes. People will oversimplify or complicate the argument, trying to delineate where that line should be. Morality is often deeply personal, and whilst you may have some basis to work from (your parents, your religion, the law) it is open to interpretation and we all change the narrative to fit our on world view at times. It does not necessarily make us bad people, on balance.

That doesn’t mean we cannot question what they say, call out the stuff that is inaccurate, racist or wrong. And social consequences, losing followers, book sales etc are consequences of sticking your head up and saying you think something. There will be plenty of people who do not agree, and if their opinion is more popular at the time then you might lose your radio show or newspaper column and frankly, you have to accept that. That is why I don’t feel sympathy for JK Rowling (Gender Critical readers, it’s okay, I defend her later too, you can keep reading). She expressed her opinion and a lot of people disagreed and a lot agreed and that is the benefit of living in a society where we can enjoy our free speech, and our freedom to debate even if we have to accept some uncomfortable reactions and inevitable consequences. Jon Ronson of course famously explored this in his book So You’ve Been Publicly Shamed which I think should be required reading for anyone using the internet. He concludes that humans are complicated, situations are often not as clear-cut as they may seem, and we might get further if we employed a little more empathy and lot less judgement.

The real area we should be focusing our energies on is where people cannot express themselves without fear of recrimination, a recrimination that is far worse than twitter debates, more like imprisonment or even death. For example, Russian activist Yulia Tsvetkova facing prison for drawings of vaginas on her social media or Israa Al-Ghomgham, a Saudi woman who faced beheading for being a human rights activist. Where the state and the powerful organisations crush all freedoms and all opinions, that is true cancel culture, often with grave consequences. This is explored in more depth and more eloquently by the brilliant Jillian C York in a recent article. It is often those in the story who are without the power who face the worst consequences.

For example, thinking about Natasha Tynes who went viral after sharing a tweet shaming a black female train company employee for eating on the train, when it is not allowed to do (which I’m sure people do a lot). If she had succeeded in getting the employee fired that would be cancel culture at work, and most of us would decry that as an unreasonable thing. Instead it went the other way and her book deal was cancelled. This is also cancel culture, but a lot of people feel that is more justified. I’m not sure both are equal, because of the power dynamic, but I’m also not sure either deserve to have their careers negatively impacted over one stupid moment on social media. Natasha is fine by the way. Her book has been published, and she has an article on cancel culture coming out in Elle magazine. This is what I mean by power. She bounced back, had that train company employee lost her job then the consequences for her may have been far worse.

I do accept that things are relative, and from a position of privilege the consequences you face may be less severe than death but no less severe for your mental health. And herein lies the rub for me. I disagree with a lot of what JK Rowling said in her lengthy essay, but I defend her right to say it if she wants. I also defend the rights of others to disagree right back at her and refute her claims, much like Katy Montgomerie did in her well researched article. But what I cannot excuse is the level of online bullying, the vile, abusive comments, the misogyny. We know that women face a huge amount of abuse online just for existing, let alone having opinions. Bile, vitriol directed at women in the most unpleasant ways, that is largely centred on sexual violence, is deeply rooted in misogyny and propagated by both men and women, cis and trans people in the comments to her and her supporters.

That is the side of cancel culture I am ashamed of. It devalues the debate and it comes from the very place many of us are fighting against. Dog piles, bullying and rape threats all have real consequences too, such as suicide or attempts. I’m thinking of Caroline Flack and the #bekind movement, which was popular for a quick moment, but soon consumed again by the rabid self-righteousness of the mob at the cost of measured, informed debate. There is a fine line between expressing your opinion and turning it into hate filled bullying or trolling. All too often it crosses from one to another, and women are disproportionately targeted with sexual violence when this happens. And that is not okay.

And this of course is just as relevant to the abuse suffered by trans people. JK and Graham Linehan wielded the power of twitter mobs and they wilfully use them at times against their dissenters. This perpetuates an environment which makes many people feel unsafe and as if their existence is not valid. That is also not okay.

I really admire anyone who states on their tweets “please don’t go after this person” and tries to use their platform responsibly. I know it’s hard, I too often react without thinking on twitter. We all need to be a bit more aware that our words have the power to impact someone, to step back and consider the rebuttals, and be willing to learn from other people’s points of view. Engaging with those you don’t agree with is a sign of a functioning, healthy society.

I keep harping on about this to the people I am friends with on both sides of this trans chasm and I often feel it might be too late. People have radicalised themselves to one side or the other. They all have the receipts and the strength of their convictions. But, marginalisation creates radicals, it gives birth to, often violent, anger. If we have learnt nothing from the Islamophobia of recent years, it should be that. A great paper by Dr Matthew Feldman examining ‘cumulative extremism’. It is important to remember that Transgender people are at real risk of violence, as are women, on a frequent basis. We should be looking out for one another, not fighting one another.