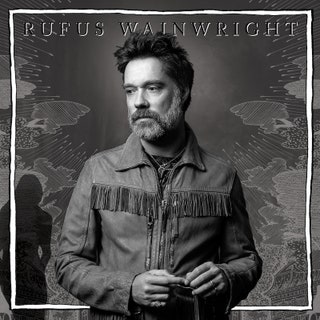 Unfollow The Rules is Rufus Wainwright’s first pop album in eight years. In the meantime he’s been settling into fatherhood, and paying tribute to the sonnets of William Shakespeare (2016’s Take All My Loves) and reviving his opera ‘Prima Donna’. His last album proper- 2012’s Out Of The Game was his most slick affair – a vehicle for Mark Ronson’s yacht-rock production and co-writes with Guy Chambers. It’s a successful exploration of Wainwright’s pop sensibilities, but was lighter on the lush, melancholy orchestration that defined his earlier work. He’s returned to the piano pop of yore, and in his own words, its an attempt at emulating “the greats of yore whose second act produced their finest work.”

Middle-age suits Wainwright. ‘Peaceful Afternoon’ and ‘My Little You’ (the latter of which addresses his parenthood fairly directly) are beautifully banal in their celebration of domestic bliss. The former is an incredibly touching waltz in which Rufus fantasises about his lover’s face being the last thing he sees before he dies. It’s a celebration of mundane ritual, the moments “between sex and death and trying to keep the kitchen clean.” ‘Peaceful Afternoon’ is one of the best songs on the record, which all draw from the musical palette of Poses and his Want albums. Experimentation doesn’t necessarily misfire – ‘This One’s For The Ladies (THAT LUNGE)’ utilises glacial synths to showcase Rufus’s wonderful voice, but it does seem to detract from the overall tone of a record that is best when it sounds most at ease with itself. ‘Devils And Angels (Hatred)’ is a real kitchen-sink job that would have been best left on the cutting room floor (or even better, flogged as a Eurovision entry- for which it would be PERFECT). Polar-opposite ‘You Ain’t Big’ is Rufus at his best: a simple, louche Spreschstimme and a witty, cutting take on parochial arrogance.

The title track feels like a centerpiece, swirling L’Historie De Melody Nelson string arrangement- and that voice! It’s unlikely that at this stage in his life he’ll write something as vitriolic as ‘Going To A Town’, for example, but the title track embodies the strengths of the record, in spite of that fact. It feels like with Unfollow The Rules, Rufus should follow his own advice – the album falls short most when it’s reaching for something – and it’s at its most self-assured and sincere when he isn’t trying too hard. More albums about domestic bliss, please. Instead of chasing Leonard Cohen and Paul Simon (by his own admission), he should acknowledge the beautiful world he has created for himself more, in both an artistic and a literal sense.

Unfollow The Rules is out now on BMG.